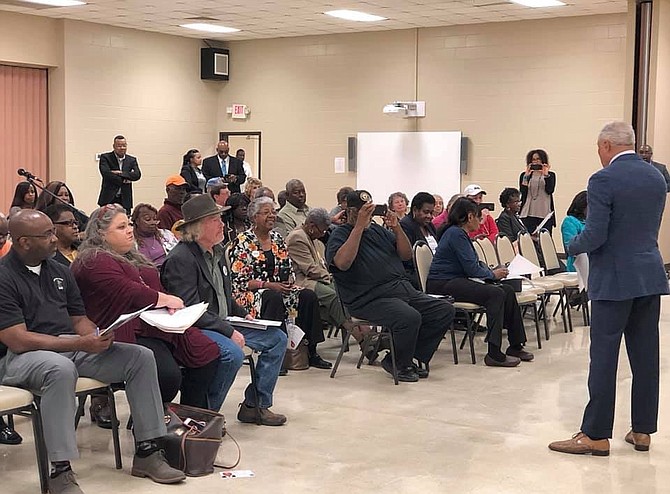 The tracker, Frank B. Lawler of Jackson, is now denying that he claimed to be someone other than himself at the event.

At an Oct. 19, 2018, event at the Washington County Convention Center in Greenville, Miss., Espy campaign communications specialist Othor Cain was scoping the room for press when he saw a man filming who was wearing khaki shorts, a red jacket and an Ole Miss cap.

“Mike was speaking, and this guy was in the audience filming,” Cain said. “I thought he was you, but then I went up to him to him and I asked, ‘Hey, who are you with?’ He said, ‘I’m Ashton Pittman from the Jackson Free Press.’”

Cain, who has met me on several occasions including when I interviewed Espy for the cover of the Sept. 19-Oct. 2 issue of Jackson Free Press Magazine, said he immediately felt like something was wrong.

“So I backed away and said, ‘Well, maybe the hat makes him look different,’” Cain said. “So I walked away, and as old folks in the black community say, something just didn’t sit well in my spirit. And I went back, like, OK, this guy is not Ashton at all.”

‘Ashton, Are You in Greenville Today?’

“Ashton, are you in Greenville today?”

Cain explained why he called, then got off the phone. Cain says that eventually, Espy staff then confronted the alleged impostor, and while he did not give his name, he confessed that he is a tracker who works for the America Rising PAC, which describes its “sole purpose” as “exposing the truth about Democrats through video tracking, research, and strategic communications.”

He was “really nervous,” Cain said. 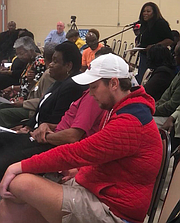 Trackers follow opposing candidates on behalf of campaigns or other political organizations in hopes of catching them saying or doing something that can be used to discredit them.

Cain had security escort him out after learning that he was filming for a PAC rather than there as a reporter, he said. At some point, Cain said, he realized the same man had been escorted out of another event in June. At that event, Espy held a press conference with U.S. Sen. Cory Booker, D-N.J.; I was also in attendance as a reporter.

Cain sent a photo of the tracker by text message. I contacted Tanner Watson, the communications director for the Chris McDaniel for U.S. Senate campaign, who is one of Espy’s Republican opponents, and asked if he recognized the tracker.

Watson recognized the man as Frank Lawler, who works for America Rising PAC, he said. Frank B. Lawler’s LinkedIn page shows he previously clerked for nearly two years at the BGR Group—long known as Barbour, Griffith and Rogers—one of the world’s most powerful lobbying firms and co-founded by Haley Barbour of Mississippi. Barbour left the firm to serve two terms as governor of Mississippi, then returned to help run it in 2012. (Earlier this week, in the wake of Washington Post journalist Jamal Khashoggi’s death, that paper told BGR Group Chairman Ed Rogers to stop lobbying for Saudi Arabia or lose his column rights in that newspaper.)

'Our Tracker Never Said He Was a Reporter'

“America Rising trackers never impersonate or misrepresent who they are or who they work for. Our tracker never said he was a reporter,” Dolan said.

Dolan sent the Jackson Free Press two clips from Lawler’s recording of the event, but they leave the question unresolved.

The first eight-minute clip—possibly the time when Cain asked for Lawler’s identity and said he presented himself as a reporter for this newspaper—did not contain audible cross-talk to clarify what either said. In that recording, Espy and other women were speaking at the front of the room as Lawler recorded from the audience.

The second clip tracked with Cain’s description of going back up to Lawler after speaking with this reporter to ask again who the tracker was with. The voice is not Cain’s, however; the campaign confirmed the next day that it was a different staffer who eventually asked Lawler to leave—rather than Cain as he had first described—but Cain was unclear by noon Saturday of that man’s identity.

“I thought you said you were with the Jackson Free Press,” the Espy security person—whose name is not yet available—said to Lawler, as the American Rising clip indicates.

“No no, I never said I was with the Jackson Free Press. I’m with America Rising,” Lawler said.

“I don’t think they want you to record.”

At that point, the recording indicates that Lawler left the room.

In response to Lawler’s denial, Cain reiterated Saturday morning that the PAC tracker had claimed to be this reporter before he called to verify that the JFP was not at the event.

Cain repeated that he initially approached Lawler as he filmed, tapped him on the shoulder and asked who he was with. “He said to me without blinking his eye that he was Ashton Pittman from the Jackson Free Press. So I can't speak to what he may have recorded after I left,” Cain said.

Most recently, Frank B. Lawler’s LinkedIn page showed at press time, he was a media associate at the conservative Pacific Legal Foundation, which members of Gov. Ronald Reagan’s staff started in 1973 “as the first public interest law firm dedicated to the principles of individual rights and limited government,” its website explains.

His LinkedIn page lists Lawler as a Jackson resident, but with no current employment included.

It shows that Lawler graduated from the University of Mississippi in 2015 after attending high school at the Baylor School, a prep boarding school in Chattanooga, Tenn.

This tracker may not only be interested in following Democrats, however. Watson said Lawler comes to most of McDaniel’s campaign events and films them, too. 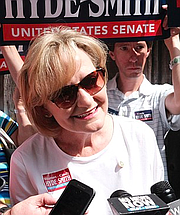 U.S. Sen. Cindy Hyde-Smith's campaign denied that Frank Lawler works with them and say it is illegal to coordinate with a PAC. They do know him, however. Photo by Ashton Pittman

The article features an apparent photo of Lawler holding up a smartphone and filming at a McDaniel event. The article says that Lawler attempted to infiltrate the McDaniel campaign to volunteer. Watson said he was “in the dark” about any attempts by Lawler to sign up, however.

“Cindy” refers to Republican U.S. Sen. Cindy Hyde-Smith, whom McDaniel and Espy are both seeking to unseat in November, and are both challenging to a debate, which she has refused to date.

Before I told Scallan about the tracker, I asked if she knew anything about America Rising PAC. She said she did not and asked me to explain what it was.

Next, I asked if she knew someone named Frank Lawler. “His name sounds familiar,” Scallan said, before pausing. “Who is he?”

Then, I relayed to her the story about the tracker following the Espy campaign. She said she would ask other staff members if they knew him or recognized his name. 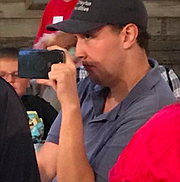 “We know his name, but he doesn’t work for us,” Scallan wrote.

I asked if she could tell me who in the campaign knows him or how they know him.

“Not really,” Scallan wrote. “He’s not affiliated with the campaign.”

During the initial Friday night conversation with Lawler, the Jackson Free Press asked if he in any way worked with or coordinated with members of the Hyde-Smith campaign.

“I can’t answer anything on the record or off the record,” Lawler said. “Let me call my boss.”

The Jackson Free Press asked Dolan if it ever sent Lawler or other trackers to follow Hyde-Smith. No, America Rising only follows Democrats, she said. When asked whether America Rising sends Lawler to follow McDaniel’s Republican campaign, Dolan would only confirm he had been at the Espy event in Greenville on Friday.

‘He Is a Byproduct of a Corrupt System’

Lawler has appeared at events for other campaigns, too, including several for Democratic U.S. Senate candidate David Baria, although none of them has reported that Lawler used someone else’s name. Baria is running in a separate race against Mississippi’s other incumbent U.S. senator, Roger Wicker.

“He uses a camera, shows up, sits off to himself, and films everything,” Baria campaign manager Alyssa Miller told the Jackson Free Press. “By now, David has just started saying hi to him.”

Before McDaniel jumped into the race for the seat Hyde-Smith now holds, he announced a campaign in February to challenge Wicker in the Republican primary. On March 5, however, former-Sen. Thad Cochran retired due to poor health, triggering a special election; McDaniel switched races on March 14 and Gov. Phil Bryant appointed Hyde-Smith to serve in the seat Cochran vacated at least until the special election, set for Nov. 6.

At least one tracker from America Rising attended campaign events when McDaniel was still running against Wicker, Watson said.

“I remember when I got hired by the campaign on March 1, I went to an event that night and there was a kid there named Sam,” Watson said. “I asked him who he was with, and he said, ‘America Rising.’ I said, ‘OK, who’s America Rising?’ He said, ‘We track Democrats.’ And I said, ‘What are you doing here at a Republican rally?’ He didn’t have an answer, so I said, ‘Yeah, you’ve gotta get out.’”

Despite being kicked out of the March 1 event, “Sam” continued showing up at campaign events.

One night, Watson said, “Sam” was at a McDaniel event in Iuka, Miss., when he put his camera down and announced that he was quitting his job.

“I’m quitting,” Watson recalls Sam saying. “I can’t do this anymore. You guys have always been friendly to me.”

“Frank’s not a bad kid,” Watson said. “He’s doing his job. And he’s got a job to do just like I’ve got a job to do. What he is a byproduct of a corrupt system. He’s a byproduct of an establishment that is scared of their gravy train being threatened. He is working on behalf of the establishment—on behalf of (U.S. Senate Majority Leader) Mitch McConnell. To him it’s just a job, it’s not personal. I don’t hold anything against him.” 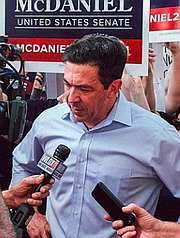 Staff for U.S. Senate hopeful Chris McDaniel blames a "corrupt" system for the trackers the Senate campaigns are seeing leading up to the elections. They blame the Republican establishment for the trickery. Photo by Ashton Pittman

Cain said he recognized a photo of another tracker mentioned in the Mississippi Conservative Daily article as having attended McDaniel events. The article identifies him as “Jordan,” but the Jackson Free Press has not yet verified his identity or his employer. Cain said he has seen “Jordan” at Espy events as well.

Miller said other trackers follow the Baria campaign. She said she did not know their names or affiliations.

Ashton Pittman covers politics and elections for the Jackson Free Press. Follow him on Twitter at @ashtonpittman. Email him at [email protected] Read more 2018 campaign coverage at jfp.ms/2018elections. Donna Ladd contributed to this story.

This story was updated on Oct. 20, 2018, at 1:11 p.m. to reflect comments from Frank B. Lawler, America Rising PAC, and additional comments from Othor Cain.