Historic Victory for Espy in Mississippi Is 'Not An Illusion,' George Will Says | Jackson Free Press | Jackson, MS

Historic Victory for Espy in Mississippi Is 'Not An Illusion,' George Will Says 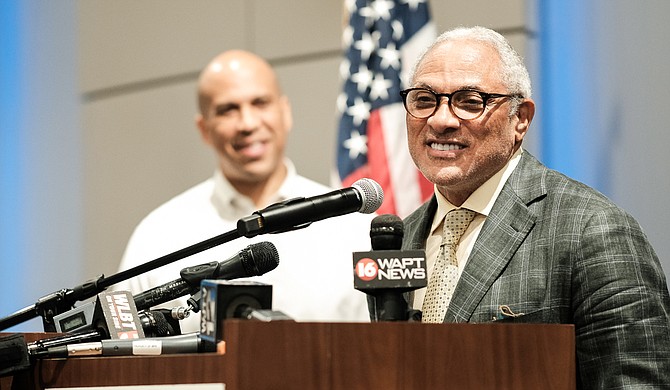 JACKSON — Democrat Mike Espy could be the next U.S. senator from Mississippi, renowned conservative columnist George Will wrote in a Sept. 5 piece in the Washington Post.

"The odds are somewhat, but only somewhat, against Espy, so the possibility of victory is not an illusion," Will wrote.

In June, Will, an opponent of President Donald Trump's takeover of the GOP, urged conservatives to vote to turn control of Congress to Democrats in November to punish the GOP for submitting to Trump and failing to hold his administration accountable.

In 1986, Espy became the first elected African American congressman. He then served as U.S. secretary of agriculture under President Bill Clinton from 1993 to 1994. If he wins in November, he will also become the first black U.S. senator from the state since the Reconstruction era.

Those aren't the only historical winds Espy faces. Mississippi has not sent a Democrat to the U.S. Senate since 1982. In his column, though, Will highlights reasons he thinks Mississippi Democrats should be optimistic about Espy's chances.

Mississippi sits wedged between two states that have elected Democrats in statewide races in the past three years. In Louisiana, Democrat John Bel Edwards beat Republican David Vitter in a governor's race in 2015; in Alabama, Democrat Doug Jones edged out Republican Roy Moore in a U.S. Senate special election last December. Both races, however, featured scandal-plagued Republican candidates. Vitter admitted to hiring prostitutes in Washington, D.C., and Moore faced accusations from multiple women that he sexually assaulted or preyed upon them when they were teenagers.

Espy is unlikely to benefit from a sex scandal as he faces off against two Republicans—incumbent U.S. Sen. Cindy Hyde-Smith, whom Gov. Bryant appointed to the seat in April after Sen. Thad Cochran retired, and Republican Mississippi State Sen. Chris McDaniel—but he could benefit from an enthusiasm boost among black voters, as well as younger ones..

As Will points out, Mississippi has the highest percentage of African American residents in the country at 37.8 percent; comparatively, Alabama is only 26.8 percent black, while Louisiana is 32.6 percent black.

Mississippi already has a history of voters under 30, of all races, voting more "blue" than Republican. In the 2004 presidential election, exit polls showed that the state led the South in the percentage of that age group that voted for John Kerry (63 percent) over George W. Bush (37 percent).

Endorsement of The Black Economic Alliance

The Black Economic Alliance, a new PAC that has already raised $3.5 million to support black candidates across the country, endorsed Espy Monday.

"Espy has placed the BEA policy agenda—increasing work, wages, and wealth as a means for bolstering success within the Black community—at the center of his campaign," the endorsement reads. "Supporting Espy means supporting a Black candidate in the state that has the highest Black population nationwide. He has not only advocated for the Black community, but he has broken barriers to ensure that Blacks were represented."

Espy's main policy item on the campaign trail has been supporting Mississippi farmers, whom he says the president's trade policies are hurting. The state has about 55,000 farmers, and about 6,500 are black.

The Alliance also endorsed Democrat Stacey Abrams for governor in Georgia. If elected, Abrams—who grew up in Gulfport, Miss.—would be the first African American woman elected to serve as governor in the nation's history.

Black women are working hard on a grassroots level to get out the vote in Mississippi as well. LaTosha Brown, co-founder of the Black Voters Matter Fund, recently led a bus ride from Jackson into the Mississippi Delta to motivate people to vote in November.

"The needs that are in our communities, those needs are not getting met, and the needs continue to be the same," Brown told the bus filled with mostly women, including Jackson Free Press reporter Ko Bragg. "If the Blockbuster model and approach to politics is not working, then we've got to come up with the Netflix."

On Sept. 3, Courageous Conservatives PAC, which supports McDaniel and recently announced a six-figure investment in his campaign, released a poll of the U.S. Senate race. The poll found Espy just leading in a three-way race with 28.2 percent, Hyde-Smith following with 27.4 percent and McDaniel in third with 17.8 percent.

The poll found a gender gap among the Republican candidates, with Hyde-Smith leading McDaniel 30-11 among women, while McDaniel led Hyde-Smith just 25-24 among men. McDaniel supporters have treated Hyde-Smith harshly in public and had planned to attend Donald Trump's Sept. 15 rally in Jackson where the president planned to campaign for her. It was cancelled due to the impending hurricane on the east coast, however, Trump's staff announced. McDaniel himself is angry that the president did not endorse him.

Hyde-Smith did not appear to receive a boost from Trump's endorsement in late August, the pollster noted, with her earning only a third of support from those who were aware of the endorsement.

The results of the pro-McDaniel poll corroborate an internal poll the Espy campaign conducted in August that found him leading Hyde-Smith and McDaniel not only in the three-way race, but also in one-on-one matchups.

Also on the ballot in Mississippi this November are congressional races in each of the state's four U.S. House districts, as well as the state's other U.S. Senate seat, which incumbent Republican Sen. Roger Wicker, who faces a challenge from Democrat David Baria, holds.

Those elections and the U.S. Senate special election are on Nov. 6, 2018—the same day as the national midterms. Polls in Mississippi are open from 7 a.m. to 7 p.m.