Signs of Danger for GOP in Polls of Mississippi's U.S. Senate Race 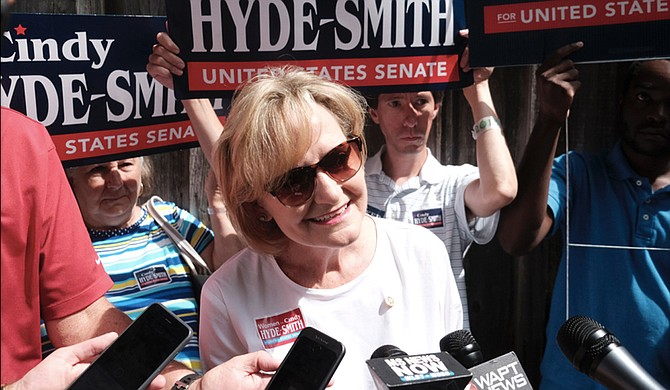 Republican U.S. Sen. Cindy Hyde-Smith answers questions from reporters at the Neshoba County Fair in Philadelphia, Miss., on Aug. 2, 2018. She became the first woman from Mississippi to serve in the U.S. Senate after Gov. Phil Bryant appointed her in April after former Sen. Thad Cochran retired due to health concerns. Photo by Ashton Pittman.

Buzzfeed News first reported the poll on Sunday, Aug. 5. It showed that the other Republican in the race, Mississippi State Sen. Chris McDaniel, is running about 10 points behind Espy and Hyde-Smith. In the 2014 Republican primary for the seat, McDaniel narrowly lost a bid to oust Cochran.

Because this race is a special election, there will be no primary this time. Both Republicans will go head to head against Espy in a jungle-primary-style election. If no candidate wins more than 50 percent of the vote, the election will have a runoff.

"Our polling shows we've got a path to victory," the Espy campaign wrote in an email to supporters after the leaked poll was reported.

A separate poll conducted from Triumph Campaigns, which Y'all Politics released on Thursday, Aug. 9, diverged from the two internal polls, giving Hyde-Smith a 41-27 lead over Espy, with McDaniel drawing just 15 percent. That poll showed Espy—a former U.S. Secretary of Agriculture who has focused on protecting soybean farmers hurt by Trump's tariffs—leading in just one of the state's four Congressional districts: the second, where the majority of the state's soybean farmers live.

However, Chism Strategies, a Democratic polling firm in Jackson, criticized the Triumph poll's methodology. In a post on its website, the firm pointed out demographic oddities in the poll: 71 percent of respondents were 65 or older, only 9 percent were under 55, and women outnumbered men 60 to 40. African Americans made up only 12.4 percent of respondents, despite making up 37 percent of the state's population and voting at nearly the same rate as white voters. Even so, the poll gave Democrats a slight edge in party registration.

"These errors matter a great deal no matter where one polls and are even more egregious in Mississippi where voting is often racially polarized," Chism Strategies wrote.

The fact that Republicans were not doing better in a poll with that Democratic makeup, Chism said, could signal danger for the party in Mississippi.

"Cindy Hyde-Smith is in deep trouble if she can only muster support from four in 10 voters in this poll's electoral mix," the firm wrote. "This poll assumes nine in 10 voters qualify for an AARP card and African Americans are polled at about one third the rate of likely turnout in the fall. When properly weighted, the survey suggests that Espy almost certainly leads Cindy Hyde-Smith outside the margin of error."

In the fourth congressional district, where Democratic candidate Jeramey Anderson would become the first congressman elected to serve from that district if he beats incumbent Republican Steven Palazzo in November, African American voters only made up 8.4 percent of Triumph's respondents, giving Palazzo a 54-37 lead. Chism said the firm expects black voters to make up 20 percent of the electorate in that district, and after adjusting Triumph's numbers, estimated Palazzo's lead to be narrower at 47-44 or 48-43.

Even with the survey's demographic tilt, about the same number of Mississippians said support from President Donald Trump would make them "much more likely" to vote for a candidate as said it would make them "much less likely." Throughout the special election for U.S. Senate campaign, Hyde-Smith and McDaniel have both unsuccessfully sought Trump's endorsement, emphasizing to voters their support for the president.

Triumph conducted the poll on July 30 and 31, and polled 2,100 Mississippi voters via landline, including 525 in each congressional district.

Both U.S. Senate elections and all four congressional elections are Nov. 6. Polls in Mississippi are open from 7 a.m. to 7 p.m.