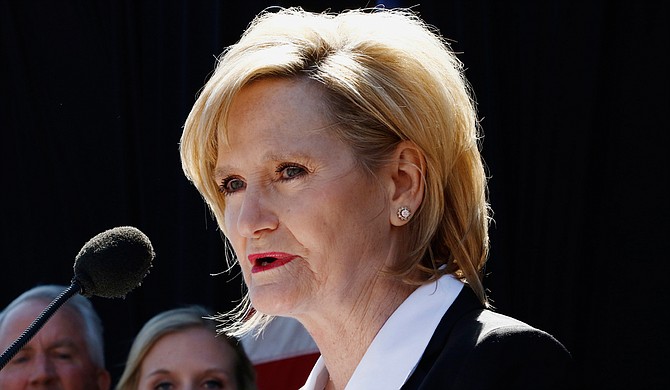 JACKSON, Miss. (AP) — Candidates and political action committees are increasing advertising ahead of the crowded Nov. 6 special election for a U.S. Senate seat in Mississippi.

Republican Sen. Cindy Hyde-Smith released a TV ad Tuesday showing her in blue jeans and boots at her family's cattle auction in Brookhaven. She relates cattle ranching to serving in Washington and says: "You can't be afraid to put your boots on and clean up the mess."

In his own ad released Tuesday, Democratic challenger Mike Espy wears a suit, sits in front of bookshelves and looks directly at the camera as he says: "Mississippi is too often defamed, dismissed and disrespected. ... I'll work to correct the stereotypes and attract companies and jobs to Mississippi. ... I believe in Mississippi, and it's time to show the nation just how far we've come."

"He's a proven fighter for you, your family, lower taxes, a stronger border and a limited government," the narrator says.

The fourth candidate in the race, Tobey Bernard Bartee, has spent little on his campaign.

Hyde-Smith was in her second term as state agriculture commissioner when Republican Gov. Phil Bryant appointed her to temporarily succeed Republican Sen. Thad Cochran after the longtime lawmaker retired amid health concerns in April. The winner of the special election will serve the final two years of the six-year term Cochran started. The Mississippi race could be important as Republicans try to maintain their Senate majority.

An NBC News/Marist poll released Tuesday shows the special election has a strong chance of going to a Nov. 27 runoff. The poll showed Hyde-Smith with support from 38 percent of likely voters, Espy with 29 percent, McDaniel with 15 percent and Bartee with 2 percent. Fifteen percent said they're undecided.

The poll showed that in a hypothetical runoff, Hyde-Smith leads Espy 50 percent to 36 percent among likely voters, with 13 percent undecided.

In another hypothetical runoff, the poll showed Espy with 43 percent support and McDaniel with 26 percent, with 19 percent undecided.

A news release from NBC did not say whether people were polled about a runoff between Hyde-Smith and McDaniel.

The NBC/Marist poll in Mississippi was conducted Oct. 13-18 and included 511 likely voters. The margin of error is listed as plus or minus 6.1 percentage points.

Espy, who's an attorney, was elected in 1986 to a U.S. House seat in the Mississippi Delta. He was U.S. agriculture secretary under President Bill Clinton in 1993 and 1994.

McDaniel is a third-term state senator who nearly unseated Cochran in a bitter 2014 Republican primary.