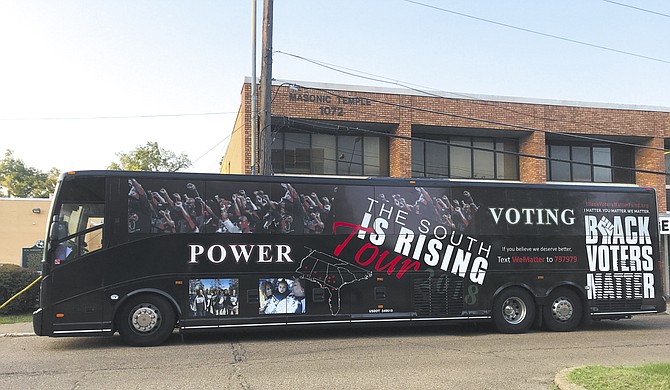 LaTosha Brown, co-founder of the Black Voters Matter Fund, often breaks out into song when she speaks to a crowd. Two weeks ago, she kicked off a bus ride from Jackson into the Mississippi Delta with a rendition of "Eyes on the Prize." Other passengers joined her, but Brown's raspy voice rose to the top.

Brown and co-founder Cliff Albright had recently come from a Georgia community that was then at risk to lose seven out of nine voting precincts in a majority-black county near Alabama. Brown, and those on her tour, contributed to the public pushback that kept those polling places open.

The bus is a moving advertisement, with images of black people holding up the Black Power fist above the tour's title. Brown sees the bus as a "connector" because it belongs to the people, not a candidate, and sends a message of empowerment. 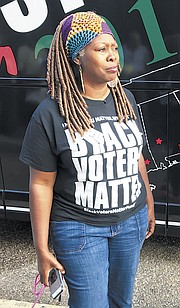 LaTosha Brown, who co-founded Black Voters Matter, stopped in Jackson on Aug. 24, 2018 to network with black women as part of her organization’s “The South is Rising Tour.”

With the exception of Albright, a photographer and a local reporter, everyone on the bus was a woman, and mainly African American—a contingency of the population Brown has become a firebrand for organizing. Brown gained national attention when she led the Alabama Grassroots Mobilization Project to get the vote out in 18 counties last December during the special election to fill Jeff Sessions' seat. The results were outstanding: 96 percent of black voters supported Doug Jones, with 98 percent of black women and 93 percent of black men backing him.

Just before the bus pulled off to make its way to the Mississippi Delta, Brown rejoiced that even the bus driver was a black woman.

"I don't know if y'all know how happy I am that I am in a bus filled with black women in Mississippi, and we're on the way to the Delta," Brown cheered into the bus microphone. "We're on a fire bus."

'A Whole Lot of Black'

Brown set out to reconnect with the rich organizing history in the Deep South, and to build new networks with people on the ground who are getting people out to vote. She intentionally invited both national and local media to join the ride.

"There's this whole image, and this narrative that those of us in the South, that we're in these red states and the only thing going on is red—no, there's a whole lot of black in these states...," Brown said. Later, she added that the media often portray rural southerners as "white Trump men."

On the bus ride, Brown got very impassioned during a chat with a local radio reporter. Brown used the common comparison between two video services, Blockbuster and Netflix, to illustrate the change she wants to see in politics.

"The needs that are in our communities, those needs are not getting met, and the needs continue to be the same," Brown said. "If the Blockbuster model and approach to politics is not working, then we've got to come up with the Netflix."

For the Black Voters Matter Fund, innovation in part comes from shifting the paradigm and investing in black women.

Social media after Doug Jones' and Donald Trump's elections decried for more people to "Trust Black Women." However, others reminded the nation that the resolve is not for black women to "save" anyone.

This year, there has been a surge of black women candidates for national office. But, in Mississippi, no black woman is on the ballot in any major race. (Read more JFP election coverage here). While Brown showed support for Mike Espy's campaign for U.S. Senate when she introduced him at the opening of his Jackson campaign headquarters, she wants more support for black women in Mississippi.

"Y'all have strong black women in this state," Brown said. "(We need) to really invest in the leadership and help give them the tools so that they can manifest their vision to really be able to use culture as a tool to empower us..."

With a police escort, the bus rolled into Greenville, Miss. and stopped at the Mississippi Action for Community Education headquarters. Fannie Lou Hamer was one of the founding board members of MACE in 1967. The mention of Hamer's name almost brings Brown to tears.

Brown and Albright invited local women politicians to MACE. Mound Bayou Mayor Eulah L. Peterson talked about a protest underway as she spoke. Students at John F. Kennedy Memorial High School in Mound Bayou refused to go to school after a Mississippi Supreme Court ruling closed their high school and consolidated it with Broad Street High School in Shelby. Black people once traveled over 100 miles away, to go to high school in Mound Bayou, as the town that slaves founded in 1887 was home to one of the only high schools for black people in the area for decades.

"We are still fighting the fight," Peterson said.

Brown's journey through Mississippi in August retraced those of Hamer. After leaving MACE, the next destination was the M.W. Stringer Grand Lodge where Mississippi Freedom Democrats assembled in August 1964 and chose delegates to challenge the national Freedom Democrats at the Democratic National Convention in Atlantic City, N.J., later that month. Hamer was among them.

"How damn long we got to sit here and say that black folks are at the bottom of the list?" Brown asked rhetorically on the bus ride to the Stringer Lodge. "I don't know about other folks, but I'm tired," she added, perhaps unintentionally evoking Hamer's famous line from the Democratic National Convention of 1964: "I'm sick and tired of being sick and tired."

Brown broke out into her final song and favorite of the evening, "This Little Light of Mine," also Hamer's favorite. She was also well known for her voice. Brown evokes Hamer's legacy on purpose.