Lumumba's State of the City Address Pans Over Past, Present and Future Jackson 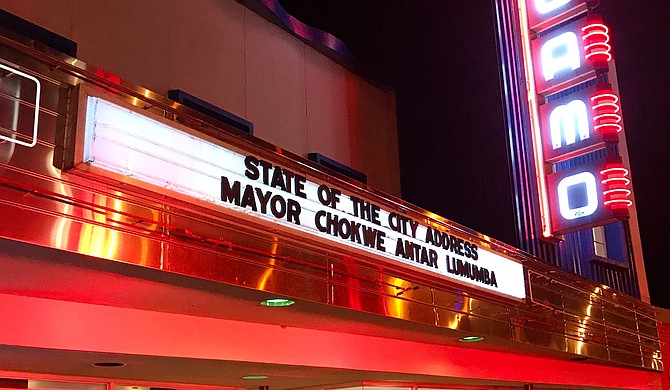 Mayor Chokwe Antar Lumumba gave is second annual State of the City address at the Alamo Theatre on Farish Street on Oct. 11, 2018. Photo by Ko Bragg

JACKSON — Mayor Chokwe Antar Lumumba walked up to the podium onstage at the Alamo Theatre on Farish Street to deliver the his second State of the City address on Oct. 11, as a track of R&B singer Brandy singing the chorus of "Optimistic" by August Greene played over the speaker system. The mayor and Jackson were the central focus of the song's music video released in February.

The introductory song, actually a remake of the 1991 song by Sounds of Blackness, laid a foundation for the upbeat 30-minute speech, in which Lumumba focused on pitfalls of the past, promises coming to bear today and projections for Jackson's future. He did not paint a picture of a perfect Jackson, but rather a progressing one.

"This is Jackson, Mississippi," he said. "One city with one aim and one destiny, with a mission to change the world from where we stand."

The mayor wasted no time revving up his voice to the cadence of someone on the campaign trail, as he outlined the major challenges his administration inherited in July 2017 and those that arose in the months to follow.

In the early months, city workers were on furlough, and there was the looming threat of a state takeover of the Jackson Public Schools. Later that year, a $1.6-million winter emergency led to frozen pipes and some homes, schools and businesses without water. Meantime, there were increasing numbers of officer-involved shootings, some fatal, in Jackson. Then, this spring, everyone was forced to reckon with the dangers of Jackson's infrastructure problems when Frances Fortner flipped her car and died after driving over an unsecured manhole the day before she was set to graduate from Jackson Academy.

"Yes, there have been challenges that we've had to face together as city, some of which we will never fully recover from," Lumumba said. "Yet, out of these critical trials, which threatened the very fabric of our city, we were able to become a better, stronger city that we should all be proud of."

The City of Jackson is now operating in a $7.8-million surplus, and workers, who were relieved from furlough last summer, received a 2-percent cost-of-living raise when the fiscal year 2019 budget went into effect. The state did not take over JPS, and citizens recently passed a $65-million bond that will go toward funding much needed repairs throughout the district.

While the winter emergency of early 2017 is in the rearview mirror for now, with the mayor promising that the City has improved its process for tending to cold-weather stress on the system, the $25-billion infrastructure issue remains.

To address the rise in officer-involved shootings, the mayor deployed a task force that established a policy to release officers' names in the 72 hours following such an incident.

"I personally believe that in any occasion of an officer-involved shooting, something has gone wrong," the mayor said in his speech."This is why I commissioned an officer-ID task force to draft policy around how we would respond to such events."

Although the mayor recently held a press conference accepting the task force's recommendations, he has yet to implement an executive order making it the law in Jackson.

"As a result of these efforts, we are now creating a growing trust in city government," he said in his speech.

The rest of the mayor's remarks followed the outline of the City's strategic plan released this spring.

This rung focuses on the physical and mental health of citizens and communities through clean air, clean water, the availability of healthy food and recreation.

"Every citizen, every Jacksonian, has the right to be able to feed themselves and their families with clean and healthy foods. Your zip code and/or your lack of transportation and income should not be a determining factor as to whether you and your family have access to fresh produce," Lumumba said.

In September, the National League of Cities gave Jackson a $120,000 grant under "CHAMPS": Cities Combating Hunger Through Afterschool and Summer Meals Programs. The mayor said the City will soon implement a Jackson Meals Matter program with the funds. To reduce Jackson's carbon footprint, he said three solar farms are forthcoming.

Under this goal, the City is determined to reduce crime, and integrate commerce and housing with a diversity of income levels. Improved infrastructure and the maintenance of it also falls here.

On the crime topic, Lumumba thanked the audience for allowing him to take his time in choosing a permanent police chief. The mayor was without a permanent lead over the Jackson Police Department for most of his time in his role after Chief Lee Vance retired at the end of 2017. He appointed two consecutive interim chiefs before the Jackson City Council voted in James Davis as chief in late September.

"You offered your patience as I took the necessary time to make the thoughtful decision about who was the best person to lead the Jackson Police Department," the mayor said.

In terms of infrastructure, Mayor Lumumba promised to eliminate 25 percent of blight in the city by 2021, starting with a Mississippi Home Corps grant the City received in February.

In the realm of street paving, the mayor touted his "record number" of interlocal agreements formed with the Hinds County Board of Supervisors that will allow street paving in compliance with the American Disabilities Act. The city is under an ADA consent decree. In August, the mayor approved 59 streets for paving—a total of $4 million worth of work through interlocal agreements.

He said the 1-percent-tax commission will tackle other streets next month, but Bailey Avenue, which sprawls into west Jackson, specifically elicited the most cheers.

The City has also begun renegotiating the Environmental Protection Agency consent decree to make it more aligned with what Jackson can afford. The City is working to correct its billing issues that left more than 20,000 customers "stranded" in the system, meaning they did not receive bills for in some cases as long as a year. The City will soon begin shutoffs to nonpaying customers, but both the council and the mayor have outlined citizens' entitlements in separate "Bill of Rights" documents in recent weeks.

This goal is the most self-explanatory. The City aims to bridge early-childhood and public K-12 education to higher education.

"A key component to achieving this goal was keeping the schools under local control," the mayor said. "While the governor and I may not share political ideologies, we have demonstrated that we can work together for the benefit of our students."

The $65-million bond referendum that passed at the beginning of the 2018-2019 school year with around 85 percent of the vote will also help meet this goal, as a school-board-appointed committee will oversee the distribution of these funds to ensure they go toward much needed capital improvements.

Goal 4: A Growing Tax Base with Occupational Opportunities

This set of tasks hinges on economic development, growth and capacity-building for business in Jackson, including small and disadvantaged ones, with the ultimate goal of decreasing poverty through employment and living wages.

"To date, our greatest exports as a City have been our money and our talent—two resources that we can ill-afford to do without," Lumumba said.

The mayor said talent retention, reviving Farish Street, efforts to develop high-speed internet with the help of "returning citizens" from prison, will all play a role in Jackson's economic development. The mayor said the 10 percent of every department's discretionary funds will pour into small and disadvantaged businesses in the City of Jackson as a capacity-building program.

He also announced a parking program that will begin to collect money for parking on downtown streets.

"As everyone knows, parking in the City of Jackson is essentially free," Lumumba said. "To remedy this problem, we are initiating a pilot program to test digital parking meters in the City."

Michelle Thomas, the City's financial consultant, has a track record of improving cities' bottom lines by going after fees that should be collected anyway—like those from the out-of-order, flashing green meters that line Jackson's downtown streets.

Goal 5: A City That is Open and Welcoming to Visitors

This final focus stems from the desire to create a "cohesive city experience" through art and culture for both residents and visitors.

The City is a finalist for the Bloomberg Philanthropies Public Art Challenge, which could give the Jackson $1 million for a public-art project.

The mayor credited the Department of Planning and Development with their efforts to make the city, and the downtown area in particular, more conducive to bringing people together. Their largest test could be developing the 9 acres in front of the Jackson Convention Complex. However, the mayor insisted that development in Jackson has to expand.

"We cannot simply concentrate our resources in the more affluent parts of town," he said. "It is my goal to enforce a more equitable approach to solving our problems."

Radical City, By and By

The crowd left the theatre beaming after the mayor's speech motivated the room.

Heather Ivery, the president of the Zoo Area Progressive Partnership, said the speech was energizing, and even though it would have been nice for the mayor to mention the zoo, she still felt encouraged.

Ward 7 Councilwoman Virgi Lindsay said the speech was a good reminder of just how many challenges the City faced during Lumumba's first year in office and her first year as councilwoman.

"It's also a time of celebration because we have found ways to meet these challenges and move forward to make Jackson a better place for everyone," she added.

Laurie Roberts, founder and executive director of the Mississippi Reproductive Freedom Fund, also said she felt positive after the speech. But she did have a few "negative takeaways" and critiques, especially around the City's plans for making Jackson more attractive to visit.

"My fear when we're talking about making Jackson more palatable and more accessible to other people—who are these other people, and what does that mean for people who are already here?" she said.

Mayor Lumumba admitted toward the end of his speech that he and his administration still have work to do.

"When you elected me, I promised you that, together, we would make Jackson the most radical city on the planet," he said. "These are all radical accomplishments, and we have been able to realize these accomplishments together. But there is still work to be done, and we are still not satisfied."