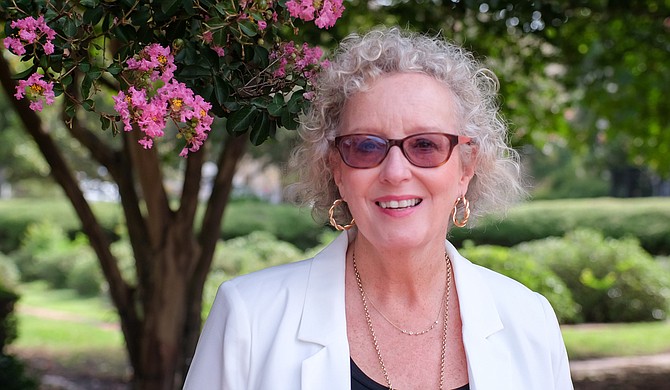 During her first year as councilwoman, Virgi Lindsay of Ward 7 has been outspoken about how the City manages its fund balance and the zoo. Photo by Delreco Harris.

JACKSON — Virgi Lindsay's Belhaven home sits atop a hilled driveway. Inside, it feels like a boutique hotel lobby with large, esteemed coffee-table books such as Frank Lloyd Wright's "Inside and Out," the "Encyclopedia of Southern Culture," and one about the artist Henri Matisse's radical years.

During an interview in her living room on July 2, Lindsay reflected on her first year as councilwoman for Ward 7, and what she hopes for the City in the future. The next day, her colleagues elected her to serve as vice president of the council.

While answering questions, Lindsay chews over the best way to say things, as any journalist would when on the other side of the tape recorder. When she came to Jackson in the 1980s, she worked as a reporter for The Clarion-Ledger. She later served as public relations director for Jackson Public Schools, the executive director of Belhaven Neighborhood Foundation, and as a member of the board of directors for the Jackson Zoo. She also helped found the Mississippi Farmers Market that grew out of the open-air Greater Belhaven Market.

Over the last year, Lindsay, 61, has been outspoken about how the City manages its fund balance, Jackson Public Schools, libraries and the zoo. Shedding her rookie title, she looks forward to this budget season and improving not only infrastructure, but also quality of life in the City she's called home for nearly four decades.

How was your first year on council?

You know, I think this has been one of the most interesting years of my life, and that's saying something because I've done some interesting things. There's been a newness at the City level, some excitement about what could be. But there have certainly been challenges, I mean breathtaking challenges with schools, the infrastructure and the state of the financial bottom line of the City. ... While those of us that are new inherited these problems, or these challenges rather ... going into it, my eyes were wide open. So, I feel like in some regards we've begun to at least chip away at some of this. But sometimes you know that the more you chip at things, the more you find that has to be fixed.

How do your constituents (of Ward 7) feel about this year?

My sense right now is that there continues to be a lot of frustration with the overall infrastructure. These problems certainly did not happen overnight, and solving water, sewer, streets (and) drainage issues will not be fixed overnight. I often tell my friends that I am not doing this for my generation, or even for my children's generation, but I'm doing this for my grandchildren because I think it's going to take that long to get it resolved.

How was your time on the zoo board? Any thoughts about the zoo?

My time on the zoo board was again filled with a lot of hard decisions to be made. I just am very sad that here we are at the 100th anniversary at the zoo and it is, for all practical purposes, just not doing well. So I think some hard decisions have got to be made. What I'm working toward is trying to build some sort of consensus-building group where we can come together and work together and figure out the right course.

I'm fortunate to have a good working relationship with the mayor and his team and all of the department directors. I really believe that being able to pick up the phone and have a meaningful conversation with all of these people is important to my constituency, and you know, that's how we get things done in Ward 7. We build relationships, and we network, and we identify problems, and we work at getting them done. I know that it's easier to get things done when people answer your phone calls.

How do you think he differs from other mayors in Jackson?

He's very young, he's very energetic. He obviously has a vision for the City and for the future, and I think he wants to make a lasting impact. ... I think he came into this position believing that the way to accomplish all of those things was to hire the best and brightest and smartest people he could convince to come work at the City of Jackson with him, alongside him. And, I think he's attempted to do that. He's not afraid of surrounding himself with people who know more than he does and are smarter than he is. That's what it takes, that's what makes a good leader.

How do you feel about the upcoming budget hearings?

I'm looking forward to them. Last year, the first time I went through the budget hearings I'd been on the job one month. I barely unpacked the boxes in my office, and now that I've gotten a whole year behind me, I feel like I'm going to enter into the budget season with a better comprehension and understanding of where we've got some real deficiencies, and I will be looking more carefully and closely at ways to meet the needs of the citizens and yet keep us within budget.

With the ups and downs with the fund balance, are you looking forward to cementing a better process of what the City will fund?

I thought we'd done that last year. I think as we move forward, we really have to look at what's practical for this city. We all would like to fund everything that makes folks feel good—that's lagniappe for politicians. But, we're not at that place right now in our city. And while I think it's really important that our departments look at ways to improve quality-of-life activities for people who live here, and really draw people back to the City, I think we have to be very careful to put some specific processes in place.

I think the Department of Parks and Recreation should be completely self sufficient. ... At some point in time, we really, in essence, threw away some of our greatest assets, and that's our city parks. And we quit using them, and we quit funding them, we quit taking care of them. And there is no reason why that department, with all the activities it's planning and is doing, shouldn't be operating in the black with a surplus. And I think we're moving in that direction, but, you know, it's going to take a minute.

How do you feel about JPS since avoiding the state takeover?

(A)t the time (of the looming state takeover) the politics of it had to be handled really carefully, but I was really involved behind the scenes, and that how I like to get things done: under the radar, behind the scenes. So, I am cautiously optimistic. One of the most important things that happened was that we got to look at the school board in a totally different way. That was a real gift.

...What we've got is a real community effort, and I'm anxious to see who they're going to hire as the new school superintendent. I think that is critical. It's got to be someone who, and I hope, is someone who can make really, really hard decisions because a lot have got to be made. From what I've seen, the organizational and operational structure are going to be key.

What are your focus points going to be in the next year on council?

I'm looking forward to working a little more closely with the (Hinds County) Board of Supervisors. My ward is so bizarre; I think I touch almost every supervisor's district. I've been working with the administration to figure out these interlocal agreements. ... We've got to get the ball more down the road on all the issues in the consent-decree requirements, and doing all this within a balanced budget.

...I continue to watch for ways to grow and improve the departments for our first responders: fire, police. We need to find a way to pay our public-works employees more so we can actually hire some to do the work—I think that's a priority. I continue to be concerned about the state of our library facilities. I believe that cities must have good libraries, and I want to work with the administration to see what we can do to resolve some of these facility issues. I'm sure there's more, but that's enough—that's a lot.

Also, I think it's real important for us to continue to find ways to attract new businesses and industry to our city and housing. I very much want to continue to work with our planning department in assisting them in any way possible to do that. We've got to keep looking at ways to bring people to our city. ...

As tourists or permanently?

Both. The reason we started the Belhaven Market is that we had a stabbing and Fortification Street, and we were about to lose our grocery store, and something else bad happened—we lost a big development on Fortification Street. So part of the whole premise of community development is that first you bring people to your area in a fun way so they realize that it is a good, fun, safe place to live and work. ... And that's part of the reason why ... we can't just focus on potholes. We also have to look at quality-of-life issues because the two, repairing the infrastructure and drawing people to the city, go hand-in-hand.