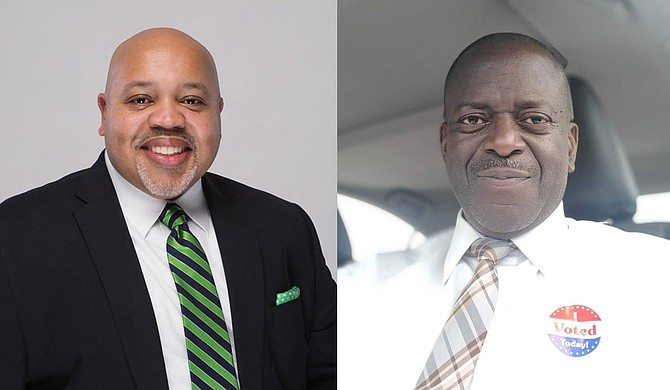 Brian C. Grizzell and Vernon Hartley emerged unofficial winners of Wards 4 and 5 Democratic Party run-off on Tuesday, April 27. Hartley convincingly edged out the incumbent, Council Vice President Charles Tillman, winning by 936 votes to 462 votes. It was a photo-finish for the other race where Grizzell drew 1,040 votes and Jacqueline Amos 956 votes. The seat became open when incumbent De'Keither Stamps won a seat in October to the Mississippi House of Representatives.

Election law mandates a run-off if no candidate garnered at least 50% of primary election votes. Both Tillman (931 votes) and Amos (1,143) got the highest votes in the April 6 primary election, with Hartley (769) and Grizzell (1,103) as their closest rivals.

Grizzell said he will be the best representative for the people. "I want to thank God first, and I want to thank my voters, my supporters, my family. They've been with me all the way, and of course, I had the best team in the world," he told the Jackson Free Press yesterday at the Hinds County Circuit Clerk Office as election officials project the results on a screen. "I'm just speechless, but we worked really, really hard day and night."

"(My constituents) can expect and depend on good governance, that's what I promise. Good governance, responsible governance, and to be the best representative for them that I can be." he added.

In a video posted to Facebook by former mayoral candidate Patty Patterson, Hartley thanked the voters and said that he is going to hit the ground running in service of the people.

"Taking care of your issues is what it's all about, and I certainly am very humbled and very grateful for folks coming out today and voting for change," he said. "We together, we're going to make that change."

Hartley said he needs the people's contribution as he develops a plan for Ward 5. "We need to get the churches, the schools, we need to get the community leaders we need to get the City government, the county. We need everyone involved in solving our issues—crime, abandoned properties, potholes, cleaning up trash, we're going to get it done."

Election officials will release official results in the coming days after collating absentee and affidavit ballots.

The Jackson City Council on Tuesday approved a $85,000 matching grant for Jackson State University Athletic Foundation for the presentation of cultural programming for the 2021 Cricket Wireless Southwestern Athletic Conference football championship games scheduled for 2 p.m. on Saturday, May 1, at the Veterans Memorial Stadium between Alabama A&M and Arkansas-Pine Bluff.

Mayor Chokwe A. Lumumba thanked SWAC Commissioner Charles McClelland for supporting moving the game, saying it is "a tremendous opportunity for the city of Jackson," with Visit Jackson estimating the economic impact at "near $7 million."

"The SWAC has come under a new tradition, in which the team with the best record typically hosts the championship game," Lumumba said. "In the midst of the COVID realities, the conference felt it best to choose a neutral site."

Visit Jackson President Rickey L. Thigpen, at a press conference on Monday, April 26, said that COVID-19 precaution for the event includes 50% occupancy for the venue. "For securing athletic events, such as this, the city of Jackson and the surrounding metro areas will see a significant increase in visitors," he said. "I cannot think of a better time for this event, and it's a welcome boost to our economy."

At the April 26 media briefing, the City also announced expanded hours for the Jackson Zoo and summer job opportunities. Parks and Recreation Director Ison B. Harris Jr. announced that from Thursday, May 6, the department will expand Jackson Zoo hours from just Saturdays and Sundays to Thursdays to Sundays, 10 a.m. to 4 p.m, with the each day's last ticket at 2:45 p.m. and masking and other social-distancing rules in place.

On Tuesday, May 4, at Sykes Gymnasium, 520 Sykes Road, the Department will conduct interviews for job openings for the summer. "We're actually looking for people in lifeguards, splash-pad attendance, recreational summer recreation or aides to work with our youth programs," Harris said. "And then we're also looking for some seasonal maintenance workers who will actually help us with cutting grass at our cemeteries and a lot of the other areas throughout the city."

The City's contract negotiations with ZoOceanarium Group fell through earlier in the month. The mayor said that the parties could not agree on the terms. “In the past year, we’ve gone from our zoo being closed to regaining our USDA license to having a successful limited reopening,” Lumumba said in a April 21 statement. “Momentum has not stopped on improvements and investment in the park. It is unfortunate that the contract with ZoOceanarium Group did not work out."

He explained at the Monday press briefing that moving the zoo from the present location is off the table and highlighted the development coming to that area of town. "[W]e can't continue to support divestment and at the same time have issues with the results that ensued," the mayor said.