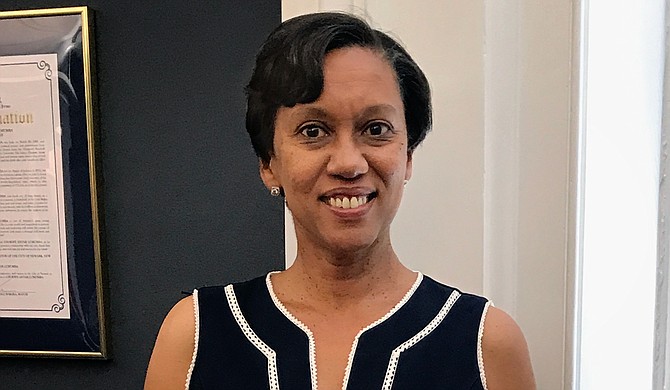 At a June 11 press conference, the City of Jackson announced that Michelle L. Thomas is stepping in to help the City through the budget process and assist Robert Blaine, the CAO and now interim director of the Department of Administration and Finance. Photo by Michelle L. Thomas

JACKSON — The woman who helped lead a budget turnaround in Newark, N.J., under then-Mayor Cory Booker will manage the City of Jackson's budget overhaul. Michelle L. Thomas, a financial expert with nearly 10 years of experience in both the public and private sector, will assist with day-to-day operations alongside Chief Administrative Robert Blaine, leading the City through the budget process.

Blaine is officially absorbing the duties of his recently departed colleague, Charles Hatcher, who resigned the finance post suddenly at the end of May.

Mayor Chokwe A. Lumumba announced at a press conference last week that an interim director with a wealth of experience would be forthcoming. But Chief of Staff Safiya Omari told reporters on Monday that the City simply did not have the funds to hire Thomas for the position.

"We would love to have had Michelle as our interim director, but we can't afford her," Omari said.

Omari expressed excitement for bringing Thomas in, even on a temporary basis. "We're confident that she has the skills and the knowledge to move us through our budgeting period and also to address some of the other issues we're facing in the department of finance right now," she said.

Thomas began as Newark's director of innovation and performance management in 2006, and two years later, stepped into the role as interim business administrator.

Some city officials questioned Thomas' preparedness at first, as she had majored in African American studies at the University of North Carolina at Chapel Hill. But after her success in the position, the Star-Ledger characterized Thomas as "the woman who steered the Newark budget through one of the worst economic crises in the city's history" in an article published after the city council unanimously confirmed her as business administrator.

Thomas cut Newark's deficit by $105 million, and she raked in $126 million in federal money for the City of Newark. She also focused on tax and fee collection.

In 2011, Thomas served as deputy mayor for operations in New Orleans under Mayor Mitchell Landrieu until she stepped down for personal reasons. Thomas made $164,000 in that role.

She then served as chief administrative officer and later interim executive director of the Louisiana Housing Corporation.

In the private sector as president of Thomas Consulting Group, she managed special projects for the Orleans Parish School Board, developed a five-year strategic financial plan for Hinds County and also for the Finance Authority of New Orleans, her LinkedIn page says.

Lumumba was out on vacation during this announcement, but the City provided a statement from him. "Ms. Thomas brings a wealth of knowledge and financial experience working with municipalities across the nation," the statement reads. "We are confident that she will continue to move our city forward in the interim."