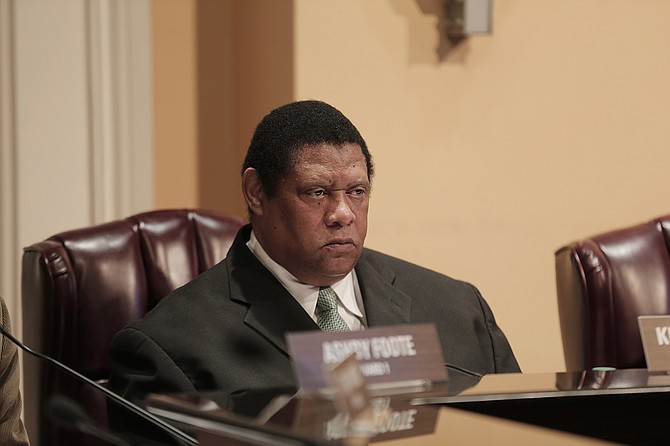 Public Works Director Bob Miller's items dominated the night. He presented six contracts for council approval that would cover costs incurred during the winter emergency in January and two others relating to the Environmental Protection Agency consent decree with the City for improper wastewater treatment practices.

As the result of the January freezing temperatures, major water lines broke and the water level in most of the City's tanks was at or near zero. Then, the mayor signed off on a state of emergency to invoke contracts to beef up water maintenance crews to correct the issue quickly.

Last week, the city council ultimately approved the $1.6 million in various emergency contracts for repairs to water lines and other engineering services, but not without some pushback.

A few council members took issue with the fact that the money would come from the water/sewer fund and later be replenished with money from the 1-percent tax. The 1-percent sales tax increase began in 2014 when citizens voted to tax themselves to fund infrastructure needs.

Ward 4 Councilman De'Keither Stamps believed the City should have presented these revisions to the budget to the council beforehand. Miller disagreed with Stamps' insistence that he should have done budget revisions first because the City has enough money to pay for these costs now, and would bank on 1-percent tax funds coming in to replace the money so the City can pay bills later.

"What if the budget revision fails?" Stamps asked Miller.

"Then we will have a serious budget challenge later this year," Miller said.

Charles Hatcher, director of the Department of Administration, assured the council that everything presented to them had come through the budget office to make sure there was sufficient funding for these emergency contracts in question.

Still, Ward 3 Councilman Kenneth Stokes was not convinced that the 1-percent commission would allocate the money later. "It seems like musical chairs or the shell game," he said.

In addition, Miller had nearly a dozen public-works related items on the agenda. The council approved an interlocal agreement with the Hinds County Board of Supervisors to make improvements up to $250,000 on Cabaniss Circle.

The council also accepted a $19,000 bid from Great Southern Recreation to resurface a playground at Pittman Park, formerly known as Poindexter Park, with an impact-absorbing surface through Community Development Block Grant funds.

The council approved an amendment to an existing Environmental Protection Agency consent-decree related contract to include flow monitoring for a sanitary sewer evaluation survey to comply with the Clean Water Act. Nearly $65,000 will go to CSL Services Inc. to expand its scope of work to include a final report and analysis of the City's West Bank Interceptor.

Also pertaining to the consent decree, the council approved a loan application from Mississippi Department of Environmental Quality to make short-term improvements under the consent decree to bring Savanna Street Wastewater Treatment Plant into compliance with its federal pollution permit. Those repairs are estimated to cost $30 million in total, and as Miller wrote in a memo to the mayor, the City needs a source of funding to finance the cost of this work.

"MDEQ has indicated that they are willing to make the City two loans in successive years, each in the amount of $15 million to fund these short-term repairs and improvements," Miller wrote.