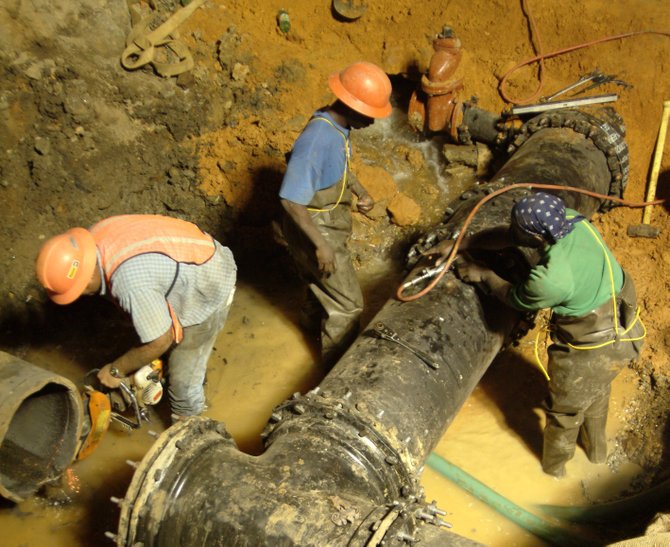 The city hopes its $90 million contract with Siemens Corp. will prevent its waste-water treatment facilities from diverting under-treated water to the Pearl River. Photo by Trip Burns.

The city has a long list of needed repairs, replacements, and upgrades to its water and sewer systems--about $400 million worth, in fact.

Jackson Mayor Harvey Johnson Jr. took a step toward getting some of that done over the holiday break when he signed a contract with Siemens Corp. for about $90 million worth of work on the old and often-failing systems. The contract includes installing new digital water meters, a digital billing system, upgrades at the city's two water-treatment plants and replacement of nearly two miles of sewer lines.

The upgrades to the sewer lines and treatment plants can't come soon enough. It is commonplace for workers at the Savanna Street Waste Water Facility to bypass the mechanical treatment procedure due to wastewater overloads. When the facility runs a bypass, workers divert the water out of the normal treatment process, treat it with chlorine to kill bacteria, dechlorinate it, mix it with properly treated water and, in most cases, send the water into the Pearl River.

In the last four years, the facility has released more than 2.8 billion gallons of the bypassed water into the Pearl River.

"During high flow conditions, untreated wastewater from the retention cells was not always routed through the mechanical plant for treatment. This action is a potential threat to public health and the environment," a 2010 U.S. Environmental Protection Agency report of the facility stated.

From Oct. 2, 2011, through Oct. 2, 2012, the Savanna facility executed 16 of these bypasses. Most of them were necessary because when as little as one-third of an inch of rain falls, rainwater leaks into the city's old and fractured sewer lines, flooding the treatment plants with more water than they can handle.

Half an inch of rainfall could mean a one-day bypass. Less than 11 inches of rain in January and February 2012 caused the Savanna Street facility to run a bypass for 40 days.

The upgrades to the plant come on the heels of a consent decree from the U.S. Environmental Protection Agency that will require the city to spend about $400 million in water and sewer improvements and EPA fines over the next 20 years. In October, the city and EPA wrapped up negotiations on the decree that began after the EPA inspected the Savanna Street plant in February and April of 2010.

The EPA inspection found 16 major problems at the plant. Some of the major causes of the bypasses included excessive buildup of waste solids in the three working retention cells, two retention cells being out of service for several years, and two of the plant's three belt-filter presses, which remove the water from the solids, were inoperable.

The city's talks with Siemens started in May, as the city and EPA negotiated the consent decree. The Munich, Germany-based company presented a proposal to audit the city's water and sewer system. If, after the audit, the city and Siemens came to an agreement, Siemens would take on a project to make major improvements to the systems.

Siemens representative Chris McNeil told the City Council in May that the new digital-meter system would only increase water bills for those who are either receiving water dishonestly or have faulty meters that do not accurately calculate water consumption.

The city will initially fund the project by selling bonds. To oversee the finances of the project, Johnson hired an advisory team that includes the Baker Donelson law firm, Jackson lawyer Anthony Simon, Malachi Financial Products, and the Begley Law Firm and Betty Mallett as bond underwriters.

Siemens has guaranteed that the project will pay for itself over time through increased revenues from the new, more accurate meters, and cost savings from the sewer lines and treatment plant upgrades. If it fails to pay for itself, Siemens will take on the remaining cost.

The city cannot use federal or state grants to help fund the costs of the EPA consent decree. Mims said the city will seek every possible avenue to fund the work without raising rates on citizens. One likely option is the state Department of Environment Quality-operated water-pollution-control revolving-loan program, which the state and federal government partially fund to allow city's to take out loans at or below market rates for such projects.