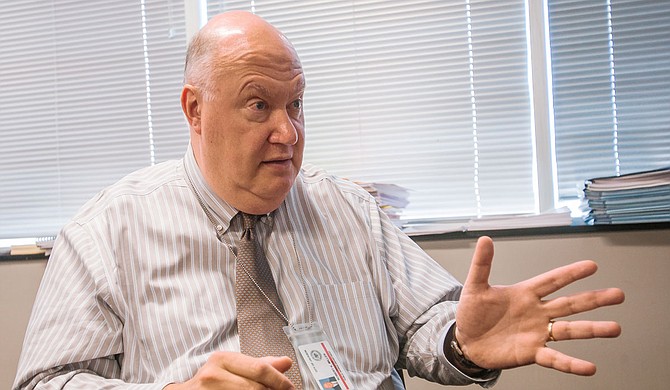 Jackson Public Works Director Bob Miller says many of the capital city's pipes break like peanut brittle rather than cast iron, but that staff and contract crews are working through the repairs. Photo by Stephen Wilson.

JACKSON — While Jackson has suffered a staggering 116 water-main breaks in the last week, Director of Public Works Bob Miller is assuring citizens that the number of new breaks has fallen off with pressures starting to return to normal in some areas.

The City declared a state of emergency to bring in additional crews to supplement the workload. Three city crews and seven contractor crews are working 12-hour shifts to repair the breaks. So far, they have completed 51 repairs, with 19 others underway, leaving 46 confirmed breaks. The City has not assigned a crew to the remaining breaks, but should by today or tomorrow, a statement from the City said.

Over the weekend, only one city crew worked on the breaks because, as Miller pointed out, many of those employees work two jobs to support their families. Contracted crews continued to work throughout the weekend, however.

Jackson Public Schools closed today, and will remain closed through Tuesday. JPS says 70 percent of schools still have low or no water pressure, though they have seen some slight improvement. Little or no water pressure affects their ability to heat the schools.

Miller says the further you get away from the treatment plants, the more challenged the water pressure is, and the only folks who would not have any water at all would be those very close to a main break or far from the plants.

The City said in a statement that several of the new breaks are adjacent to repairs that crews recently completed on aging pipes.

"Every city has got those neighborhoods—and this is parts of Fondren and parts of Belhaven, where the pipes have gotten so old that they're more like peanut brittle than they are like cast iron," Miller told the Jackson Free Press today.

"Sometimes we barely have to move at all to move to the next main break," Miller said.

Miller said the crews were able to restore water pressure to 45 percent at the Convention Center downtown that is hosting the Mississippi Association of Supervisors' 2018 Mid-Winter Legislative Conference, which was "an enormous relief," he said.

Citizens have also reported 11 unconfirmed leaks via 311. The City added staff to the 311 call center, although they reported a decrease in the volume of new calls from citizens. Miller says that under the direction of Constituent Services Director Keyshia Sanders, the City prioritized answering the phones by opening their backup call center and recruiting people to work overtime. Even the mayor's executive staff stepped in to man the call center and hand out water at distribution points, Miller said.

Despite the emergency situation, Miller said Jacksonians' kindness throughout the ordeal has stunned him.

"Emergencies don't define people, they kind of expose people," Miller said. "The thing that I did not know before I moved here is, frankly, how nice the people in Jackson are. If you take the time and communicate with them and tell them what's going on, the people calling in, I'd say 95 percent are unfailingly gracious. They just wanted an update .... We're not getting a sense of panic from folks; they just want to understand."