JPS Reopens Despite 27 Schools With Little to No Water Pressure 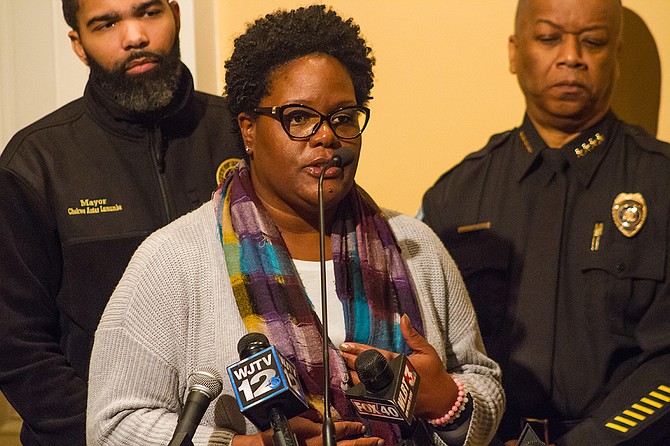 Constituent Services Manager Keyshia Sanders said the City of Jackson delivered water this morning to schools under a boil-water notice. She is pictured here at a press conference on Wednesday, Jan. 17. Photo by Stephen Wilson.

JACKSON — In what seems like old news, Jackson's water issues persist into this week. Except this time students have returned to schools with little to no water pressure, and the Jackson Public School District seems prepared to keep students in class by any means necessary.

JPS said 27 schools, a career-development center and an adult-education center are currently experiencing no or inadequate water pressure.

"It will be a full day of learning," reads a JPS statement about classes resuming today. All schools will have sack lunches and hand sanitizer, and drinking water stations and portable restrooms are set up at schools without adequate water pressure.

Given that JPS students have missed seven scheduled days of school this year so far, the district does not have much of a choice but to host classes. Only two of those missed days will be accounted for through built-in inclement weather makeup days—students will go to school on March 30 and April 2, previously days off for the Easter Holiday. The school district will consult with the Mississippi Department of Education and seek input from parents, students and employees before making its final decision about the other five days.

At a Sunday press conference on the steps of City Hall, Director of Public Works Bob Miller reported a total of 75 confirmed water-main breaks on distribution lines since Monday, Jan. 15, bringing the year's total to 231 breaks. On Friday, the City surpassed its previous single-day high with 25 breaks—the previous high was the 22 that happened on Jan. 4. These breaks on Friday caused JPS to release students early.

While many residents welcome these warmer temperatures, these fluctuations make it rough on our systems.

"Cold-weather-related challenges at the water-treatment plants have eased with the arrival of warmer weather," Mayor Chokwe A. Lumumba said in a statement. "However, we anticipate a continued large number of new water main breaks over the coming days with the wide swings in temperatures."

At the press conference Sunday, Lumumba talked about Jackson's funding issues, making a plea for "individuals who are tasked with making decisions within our Legislature to look at Jackson's legislative agenda," he said. "Because funding is critical—Jackson is the hub. The State of Mississippi will go in the same direction that the city of Jackson goes. We employ you to pay attention to this crumbling infrastructure and give us all of the resources that we need."

Over the weekend, the City had only two staff crews and seven contractor crews working. Since Jan. 1, the water system incurred between $600,000 to $750,000 of additional costs, Miller estimated on Wednesday, Jan. 17, but the City has not done an official tally to date.