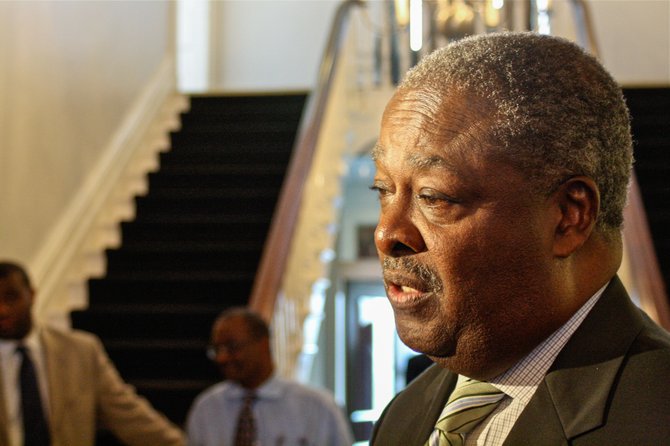 Mayor Harvey Johnson Jr. signed a $90 million contract with Siemens Corp. for what he is calling the largest water project in the city's history. Photo by Jacob Fuller.

Mayor Harvey Johnson Jr. signed a $90 million contract with Siemens Corp. over the holidays for a water and sewer improvement project.

The city and Siemens have been in negotiations over the contract since the Jackson City Council approved the project in October. The Mississippi Development Authority must approve the contract before it becomes official.

City Communications Director Chris Mims said Mayor Johnson expects the project to start with the replacement of much of the city's old and often-repaired sewer lines. The project will also include replacement of water meters, a new billing system and upgrades at the city's two water-treatment plants.

The city hopes the work will begin by March.

Siemens has guaranteed the city that the project will pay for itself over time in new revenue and cost savings. If it fails to pay for itself, Siemens will take on the financial difference.

The City Council attempted to pressure the mayor into signing the contract in December. Johnson wanted the council to approve a financial advisory team he'd selected to assure the feasibility of bonds that the city plans to fund the project. The council held off approving the committee in an attempt to get Johnson to sign the contract with Siemens first. Johnson said he wanted the team on board to review the contract first, though.

Legislative Committee Chairman Quentin Whitwell, Ward 1, scheduled a meeting for Jan. 7 at 2:15 p.m. He said the committee will finalize the city's legislative agenda just in time for the start of the session beginning Jan. 8.

Johnson said in December that the city's main focus for the state legislative session is an amended law for a local-option sales tax that does not include the oversight committee that is part of the current law. Johnson wants the city to be able to apply the optional 1-cent sales tax and decide what to do with the money, without state oversight.

Under the current law, the tax would not apply to food or medicine. The sales tax is more important than ever for the city, with a consent decree from the U.S. Environmental Protection Agency looming. The decree will require approximately $400 million in water and sewer improvements over a period of 20 years. The local-option sales tax would help pay for those improvements.

The mayor's second agenda focus is getting about $2 million in aid from the state to repair the Woodrow Wilson bridge that crosses over Mill Street and the rail yard that parallels it. Johnson said failure to act soon on the repairs could result in halted vehicle and rail traffic.

Lastly, Johnson is hoping to get incentives from the state for businesses to open or relocate in the Highway 80 corridor. The city has made strides in the area by rezoning some portions of the corridor, moving six city departments into Metrocenter Mall and building a new transportation headquarters on Highway 80.

Whitwell said the mayor hasn't presented the Council with anything in writing about the incentives he is looking for. He hopes Johnson will do so at the Jan. 7 committee meeting. The chairman said he will also push to get state funding for improvements at Parham Bridges Park, which is located in his ward.

Council to Hold Meeting at Millsaps

The City Council will hold its Jan. 8 regular meeting at Millsaps College. The meeting will take place at 10 a.m. in the Ford Academic Complex Recital Hall.

It will be the first City Council meeting outside City Hall.

Council President Tony Yarber, Ward 6, said he hopes the meeting will be the first in a growing relationship between the Council and the city's universities and colleges.