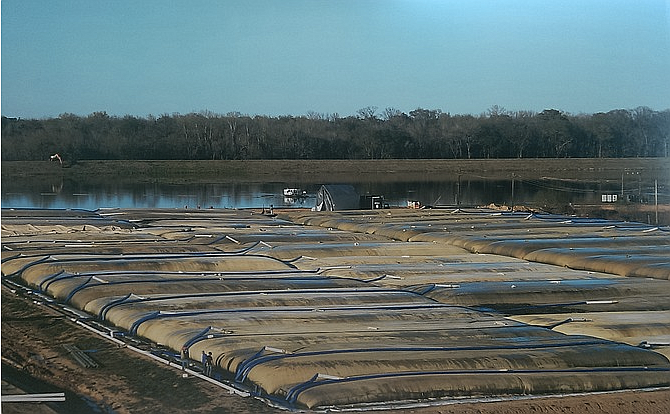 At the West Rankin Utility Authority board meeting, members continued plans to build their own plant and disconnect from Jackson's Savanna Street plant (pictured). File Photo

JACKSON — Water and sewage are at the heart of dueling legal efforts the City of Jackson and a coalition of west Rankin elected officials brought against each in recent years. To show "good faith," the City dropped all its legal proceedings against the West Rankin Utility Authority in December; however, the Rankin action against the City for breach of contract for over-charging still remains. The City was trying to continue the revenue it received from WRUA and prevent it from dumping wastewater in the Pearl River.

The West Rankin Utility Authority is a client of the City of Jackson, sending its water to the Savanna Street wastewater treatment plant here. But, WRUA began paperwork as early as 2011 to get permission to erect its own plant in order to disconnect from the City's. In November 2012, the City of Jackson entered a consent decree with the Environmental Protection Agency for the Savanna Street plant and others to come into compliance with the federal Clean Water Act with its sludge removal from the wastewater plants. WRUA uses the decree in legal documents to point to the City's mismanagement.

The Mississippi Environmental Quality Permit Board awarded WRUA the necessary permissions in April 2015 to start its own plant and discharge treated wastewater directly into the Pearl River instead of sending it through Savanna Street first.

The City challenged WRUA's permit to disconnect from Savanna Street in an appeal that went to the Mississippi Supreme Court after Rankin County Chancery Court sided with WRUA. Jackson's Supreme Court appeal alleged that with the state permit, WRUA "will cause degradation of the Pearl River," pointing to anti-degradation regulations. The City believed those regulations should have required the permit board to deny WRUA permission to discharge additional pollutants into that river because "there is technically an economically feasible alternative available to the applicant that will not cause further water quality degradation," Jackson's appeal from August 2017 reads.

However, at the request of Jackson Public Works Director Bob Miller, the City Council voted at its Dec. 19 meeting to drop this appeal to lay the foundation for restoring the relationship between the City and west Rankin. The City filed the necessary court papers to voluntarily dismiss the appeal, and the Mississippi Supreme Court granted its wishes on Jan 2.

"I subscribe to that theory that if you find yourself in a hole, stop digging," Miller told the Jackson Free Press on Jan. 8. "And that's kind of where we were in the relationship with West Rankin— that with that continued lawsuit, we were just digging the hole deeper."

Miller added that he wants to run the wastewater relationships like a business that provides "more reliable service and more predictable pricing."This decision does have potential financial risks involved. In a memo to the council, Miller indicated that WRUA's leaving the Savanna Street plant would cause costs to rise for the remaining customers.

Despite Jackson's efforts to make amends, WRUA's lawsuit against the City still stands. The authority claims Jackson breached its contract when the City overcharged WRUA for sludge removal that the consent decree requires, court documents filed in May 2015 show. WRUA only feels responsible for "a minor portion of the costs" because the sludge problems "predate the authority more than 20 years," the lawsuit reads.

At WRUA's first board meeting on Jan. 8 following Jackson dismissal of the lawsuit, the board discussed updates on the independent wastewater-treatment plant. Keith Turner, attorney for WRUA, confirmed that the organization is still in its planning and design phases for its treatment plant. The board is exploring several funding options from bonds to EPA grants. The members voted on a resolution to notify the public of their intent to issue bonds for up to $135 million. Their "lean" estimate to date for the plant is $92 million.

WRUA serves Flowood, Pearl, Richland, Brandon, the Pearl River Valley Supply District, the Jackson Municipal Airport Authority, the Mississippi Department of Mental Health and Mississippi State Hospital in Whitfield, a correctional facility and other state agencies. Mayors from those listed cities sit on the WRUA board.

If WRUA's favorable outlook on Miller is indication that things could end smoothly, then things are looking up for Jackson. But, it may not be enough. In conversation at the meeting about clearing up a valve that shut off at the Savanna Plant over the weekend because of "an operator error," WRUA characterized Miller as "a sharp guy" who "runs a tight ship."

On Dec. 20, Turner told the Jackson Free Press he is not sure if having a new public works director in place with the intention to remedy the situation outside court will change the board's mind, but said that he likes Miller's track record so far.

"As a citizen of Jackson," Turner said, "I'm glad to see Mr. Miller's actions in a lot of different areas. I think he's doing a great job."