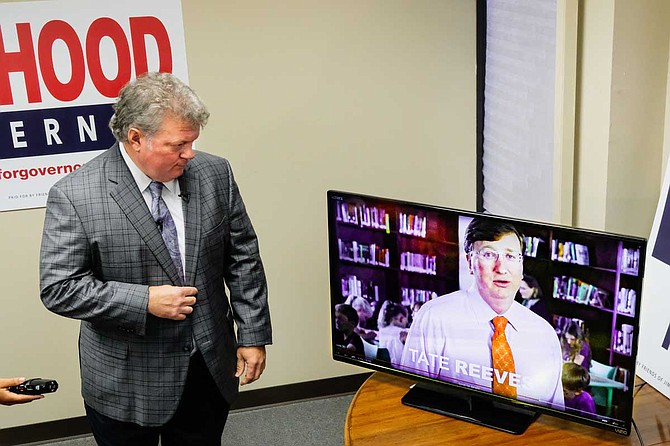 JACKSON—"It's time to get the money changers out of the temple," Democratic nominee for governor Jim Hood said on Wednesday, standing inside the Italian-white marble walls of the Mississippi Capitol Building rotunda. "I'm talking about Tate Reeves."

Hood, the current attorney general, was not only making a case against Republican opponent Reeves, the current lieutenant governor, but also for his own policy proposals aimed at bringing more transparency to the Legislature. He wants to get rid of the body's self-written exemption from Mississippi's public-records law, which would allow the public to access currently secret legislative documents, such as lawmakers' work-related emails and text messages.

The Democrat charged that Reeves, who as lieutenant governor for the past eight years also served as president of the Mississippi Senate, pursued a legislative agenda that aligned with that of his high-dollar campaign donors.

It was the second day in a row that the candidate had called a press conference to discuss the ways Reeves allegedly rewards his donors. The day before, at Hood's campaign headquarters, he asked the press to watch Reeves' recent public-education ad.

In the ad, Reeves appears in classrooms and with teachers, promising to support public education, including with a $4,300 teacher-pay raise—a turnaround since March, when the House passed and Reeves killed a $4,000 teacher-pay raise because he said the State could not afford it. The Legislature passed and Gov. Phil Bryant signed a $1,500 pay raise instead. Initially, Reeves had proposed a mere $500 election-year pay raise.

On Monday, Mississippi Today's Bobby Harrison reported that despite the ad's focus on public education, it was filmed at New Summer School, a private school in Jackson for children with special needs. Its founder and president, Nancy New, and executive director, Zach New, have donated a combined $5,000 to Reeves' campaign since 2017. The ad, Harrison reported, also uses at least some private-school teachers and Republican political appointees. Reeves spokesman Parker Briden told Harrison that he did not deny the report and that Reeves was "proud to film this one at New Summit."

"For somebody who hasn't done anything for education for the past eight years to go to a private school talking about public education and teacher pay? ... I'm not knocking private schools, but he should have gone to a public school to do this kind of thing," Hood said after an aid played the ad on a television in his campaign headquarters. "He gets $5,000 from that school. Public schools can't give campaign contributions. And that just shows what he's done as lieutenant governor. It's all about campaign contributions, and so everything is transactional with him."

"And I did, you know, and I appreciate that from the school," Hood said at Tuesday's press conference. "But the problem is, he gave them a million dollars. They gave him $5,000 back. And that's what he's done in every area. ... That's what's happening with our money. That's why we don't have money for roads, bridges and education is because he's giving it away in contracts to his buddies or in tax cuts."

The News' donations came after Reeves proved instrumental in passing the Education Scholarship Accounts, a private-school voucher program that shifts money from Mississippi public schools to pay for private-school tuition costs. New Summit and its sister school, North New Summit in Greenwood, are among the top recipients of those funds.

The ESA program, enacted under similar names in other states in recent years, currently only pays for tuition for children with special needs whose parents believe a private school can better assist them. A PEER Committee review last year, though, found that much of that money pays for tuition at private academies that do not even have special-education facilities, which sometimes requires public schools to use their resources to offer assistance.

Backers of these private-school voucher programs—which include former Florida Gov. Jeb Bush, U.S. Secretary of Education Betsy DeVos and the billionaire Koch family—focus their initial efforts on vouchers for special-needs children to make it more difficult for lawmakers to oppose them. Afterward, they introduce the idea of expanding the program to all children. In both 2018 and 2019, lawmakers introduced bills to expand or make the ESA program universal with Reeves' support, but those efforts failed in the House.

After Education Committee Chairman Richard Bennett, R-Long Beach, killed voucher-expansion efforts earlier this year, though, Reeves and other GOP leaders in the Legislature helped sneak an additional $3 million for ESAs into an unrelated funding bill on the penultimate day of the legislative session.

Lawmakers received the bill just 23 minutes before leadership in the House asked them to vote on it. By the time they realized leadership had secretly inserted the extra voucher money, it was too late. Angry Democrats and Republicans attempted to reverse the vote, but Reeves and House Speaker Philip Gunn successfully quashed the rebellion in their respective chambers.

Despite the money that goes into it, though, the ESA program currently only helps about 450 of the state's 65,000 special-needs children. For each of Reeves' eight years as lieutenant governor, the Legislature has underfunded public education in its appropriations bills by significant amounts. In all, from 2012 to 2019, the State underfunded public schools by $1.9 billion. That hit special-needs children especially hard. In 2018 and 2019 alone, the State underfunded special education by $56 million, the pro-public-education Parents Campaign estimates.

Between 2016 and 2020, the Senate under Reeves also passed appropriations bills with more than $1.3 million earmarked for New Learning Resources, Inc., which New Summit School President Nancy New also owns. It is an online learning program that adults can enroll in to earn their high-school diplomas.

The News mostly give to Republicans. In recent years, the Jackson Free Press found, the News gave $2,000 to U.S. Sen. Cindy Hyde-Smith and $4,000 to Secretary of State Delbert Hosemann, who is running for lieutenant governor.

'That Is a False Ad'

Hood called for Reeves to take his ad down.

"That is a false ad and it ought to be taken down," he said. "For the people who are trying to discern who to vote for in this race, this is a great example of just a fraud—somebody who doesn't care anything about public schools, much less about those kids—especially those poor kids. Jesus taught us to take care of the least among us—widows, orphans and the elderly. And to care nothing about them and just come up here in an election year with this kind of fraudulent ad is just disgusting."

"Well, he's had a chance to do it, and he hasn't done a thing," Hood said. "He put that puny $500 raise out there in an election year, and but for the public-education folks and the Legislature—they got it up to $1,500, but he takes credit for that. ... He claims teachers are paid more (than when he entered office). If you adjust for inflation and use average teacher pay, teachers are making $900 less than when he went into office."

The Reeves campaign did not respond to a request for comment.

The election for governor and other statewide offices in Mississippi is on Nov. 5. Anyone who registered to vote by Oct. 7 is eligible. To cast a ballot, voters must bring a state-accepted form of photo ID.