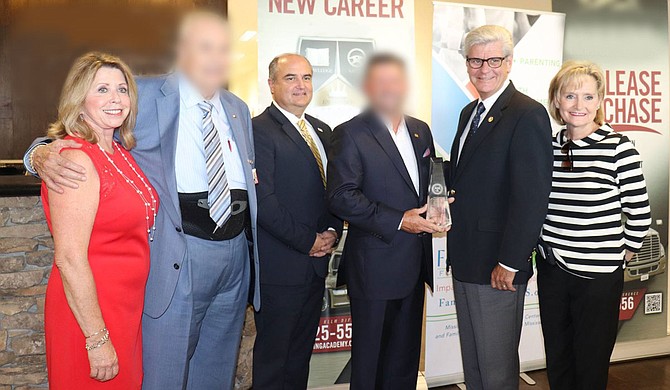 Nancy New (left) and former Mississippi Department of Human Services Executive Director John Davis (third from left) are among those charged with a "sprawling conspiracy" to embezzle government funds that were meant for needy families. Former Mississippi Gov. Phil Bryant (second from right) often appeared with New at events for her DHS-funded programs, including Families First for Mississippi. New donated to a number of top state Republicans, including U.S. Senator Cindy Hyde-Smith (right). The men second and fourth from left are not part of this story. Photo Families First for Mississippi Facebook page

At least two people who donated significant sums to Mississippi Gov. Tate Reeves' campaign allegedly engaged in what the governor called a "disgusting abuse of power." On Wednesday, State Auditor Shad White announced the arrests of multiple people accused of an embezzlement scheme involving millions in federal Temporary Assistance for Needy Families funds earmarked to help the poorest people in the state.

Two of those people, Zach and Nancy New, donated at least $5,000 to the Republican governor between 2017 and 2019. The News allegedly used TANF funds, which their nonprofit Mississippi Community Education Center received from the Mississippi Department of Human Services, for illicit activities and personal use.

"Those funds are supposed to go to the most vulnerable people of our state, and I can't understand the ego or the selfishness that you would have to possess to secretly pass off or pocket those funds instead," Reeves said at a press conference on Thursday. "Some of the people we now believe were involved in the former director's apparent criminal scheme gave money to our campaign. I can tell you right now, anything they gave to our campaign is going to be moved to a separate, untouched bank account."

Since 2016, the News have donated thousands to other top Republicans in the state, including U.S. Sen. Cindy Hyde-Smith, whose campaign did not respond to a request for comment by press time Friday. No one has indicated that any of those officials were involved in any wrongdoing.

"Anything they gave the campaign will be there waiting to return to the taxpayers and help the people it was intended for" once that audit is finished, Reeves said on Wednesday. "If that doesn't happen, that money will go to a deserving charity."

In a press conference alongside Hinds County District Attorney Jody Owens on Thursday, State Auditor Shad White described a "sprawling conspiracy" that involved John Davis, the former head of the Mississippi Department of Human Services, working in coordination with the News and other alleged players.

The charges allege that Davis and Smith helped enrich professional wrestler and Clinton native Brett DiBiase by transferring TANF funds to him after manufacturing fake invoices to create the appearance that he was using that money to teach classes about drug abuse. They did so, a Wednesday press release from White's office alleges, at a time when DiBiase was "in a luxury rehabilitation facility for his own drug use in California and did not perform the services." The charges allege that Davis directed the News to use their nonprofit, MCEC, to pay for DiBiase's luxury treatment. The News did so, the charges allege, but submitted false documentation that claimed the money was paid to DiBiase for teaching training classes.

DiBiase's father is former pro wrestler Ted DiBiase, popularly known as "The Million Dollar Man," who is now an evangelical minister in Clinton.

The charges include allegations that the News also transferred "millions" in TANF funds out of their nonprofit and into their private businesses. At his press conference on Thursday, White said the alleged crimes also involved New Learning Resources Inc., a company the News own that operates two private schools and several other entities, including the Mississippi Dyslexia Therapy School, which receives public funds.

Nancy New established the company in 1991. In 1997, she opened the New Summit School in Jackson, which specializes in children with learning disabilities. Years later, the News opened a second New Summit School in Greenwood, Miss. The schools are some of the top recipients of public funds through the state's private-school vouchers, the Educational Scholarship Accounts program, which shifts money away from public schools and to private schools. As lieutenant governor, Reeves was instrumental in getting the ESA program passed into law, but it is set to expire this year unless the Legislature opts to renew it.

At White and Owens' press conference, the state auditor told Jackson Free Press state reporter Nick Judin that his team has not found any evidence that the News misused educational voucher funds. "Everything we have seen involves TANF," he said.

In recent years, MDHS has cut the amount of its TANF funds that goes toward basic assistance for poor families. In 2018, the State received nearly $135 million in federal TANF funds, but only spent 5.4% on basic assistance, with much of the money going to programs like the ones MCEC offers.

MDHS has also left money on the table. In 2016, the Jackson Free Press reported that MDHS failed to allocate $35 million earmarked to help poor families in the state, even while many children were waitlisted for the services that it could have funded.

Former Mississippi Gov. Phil Bryant had a close working relationship with Nancy New, and attended multiple events related to her various endeavors. In 2016, Bryant appeared alongside her at the ribbon-cutting for the Families First for Mississippi Jackson office, an MCEC offshoot that New said at the time was intended to offer "different types of training and services such as parenting education, job readiness, literacy for K-12, and GED services."

From 2016: John Davis and MDHS' Dance with Privatization and TANF Funds 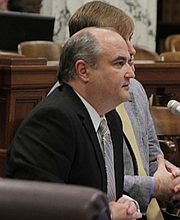 Davis, who was still the head of the DHS at the time, told News Mississippi that DHS supported the program as a way to "help an individual find work" and help youth "become successful."

Bryant tapped Davis to lead DHS in January 2016. Between July 2016 and July 2017, MCEC's contributions and grants skyrocketed from roughly $2.5 million in the previous financial year to almost $13 million. The Jackson Free Press obtained documents showing DHS grants in excess of $14 million during "grant periods" 2017 and 2018. During Davis' tenure in office, MCEC was the single largest recipient of DHS subgrants.

Reeves has also had a relationship with New in the past. Last year, Reeves' Democratic opponent in the governor's race, Jim Hood, accused his Republican rival of cutting public-education money to give favors—like ESA vouchers—to campaign donors like the News. He made those claims after Reeves filmed a campaign commercial about public education at the News' private New Summit School in Jackson.

At his press conference on Thursday, Reeves alluded to his campaign's decision to film the ad at New Summit.

"I filmed an ad in a school that some of these people helped run. I can tell you, the teachers and students I met there didn't deserve to be caught up in all this," the governor said. "It makes me sick to think that they will have to deal with the repercussions of a few selfish people in positions of power. I would consider them victims of these alleged actions as well."

When Reeves learned about the investigation after his inauguration last month, he ordered a freeze on TANF money until White finishes his audit, he said, adding that the State is already working to reform the Mississippi Department of Human Services. Like White, the governor cautioned that the investigation is still ongoing and may unearth more wrongdoing.

CLARIFICATION: Reporter Ashton Pittman chose the above photo for this piece from the Families First Facebook page that included two men who were not part of the story, the indictments or politicians who received donations from indictees. The caption was clear about who was, in fact, involved in any of those things, but we should have blurred the faces of the two men who were not involved for full clarity. We have now done that and apologize for any confusion the photo itself may have caused.

Disclosure: Nick Judin attended New Summit School and in 2006 served as a production assistant on a project filmed at the school in partnership with MCEC.