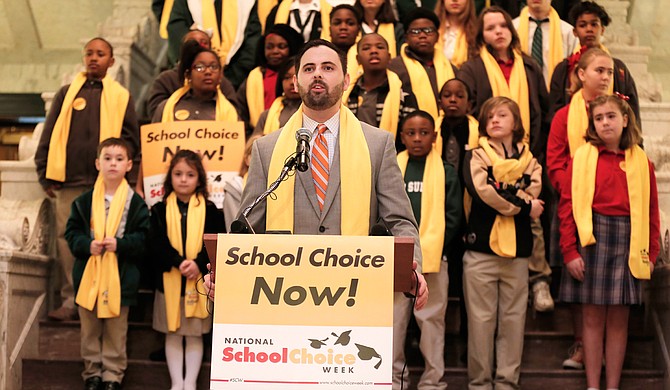 Grant Callen and his organization Empower Mississippi are arguably the epicenter of “school choice” policy and influence in the Mississippi Legislature, but the web of funders for the movement stretches far beyond state lines. Photo by Imani Khayyam.

JACKSON — In just one year, the Mississippi Legislature has gone from slightly tweaking its voucher program for students with dyslexia to a push to allow any public-school student to apply for a taxpayer-funded voucher to use at a private school.

Republican leaders are supportive of the "school choice" push, with Gov. Phil Bryant, Lt. Gov. Tate Reeves and House Speaker Philip Gunn all attending the large national "school choice" rally inside the Capitol in January, donning yellow scarves with private- and charter-school students standing behind them.

The governor even mentioned expanding "school choice" in his "State of the State" address. "I continue to believe that parents should have the freedom to have their tax dollars send their children to the school of their choice, not one decided by the government," Bryant said in his address in January.

But what organizations and people are behind the push for "school choice" in Mississippi and the transfer of public funds to private schools? Where did the most recent push for voucher expansion come from?

Few organizations have more influence on "school choice" policy and lawmakers than Empower Mississippi, the brainchild of Grant Callen, who founded the nonprofit. Callen previously worked as the director of development at the Mississippi Center for Public Policy. Empower Mississippi also has a foundation and a registered PAC, established in July 2014.

"We support all types of school choice, and we want to see a world-class public, private- and charter-school system," Callen told the Jackson Free Press.

Empower PAC began with the two top donors giving $25,000 each: then-businessman Joel Bomgar (now a state representative) and Francis Lee, listed as a manager of Liberty Springs LLC with an address attached to Tower Loan in Flowood where he is the CEO, campaign-finance records show. It was not long before national "school choice" organizations swooped in to help. 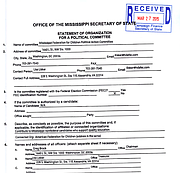 Empower PAC paid tens of thousands of dollars to the Improve Mississippi Political Improvement Committee, which sprang up overnight when Initiative 42—to force legislators to fully fund the Mississippi Adequate Education Program—went on the ballot. Beyond campaigning to defeat Initiative 42, Empower PAC funds candidates and occasionally challengers as well, Callen said. The PAC helped fund four northern Mississippi candidates who were "anti-charter school" in the 2015 elections. Three of the four Empower-supported candidates won their elections: Dan Eubanks, Dana Criswell and Ashley Henley.

Most recently, Empower PAC donated $10,000 to Lt. Gov. Reeves and $1,000 each to both the House and Senate Education chairmen at the time.

Empower Mississippi invested a lot of lobbying time and effort into then-House Education Chairman John Moore, R-Brandon, who abruptly retired before the session started before the House confirmed a sexual-harassment investigation into the longtime lawmaker. Callen, lobbying on behalf of his organization, spent nearly $3,000 on meals for lawmakers, his annual lobbyist's report shows. Callen paid for more than one lunch with Sen. Gray Tollison, R-Oxford, and Moore in 2017. 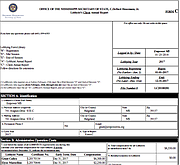 Notably, House Education Chairman Rep. Richard Bennett, R-Long Beach, is not one of the more than 50 lawmakers listed who attended a lunch or dinner with Callen. No voucher bills survived Bennett's committee deadline. Tollison, however, passed out a vast expansion of the state's education scholarship vouchers, enabling any student who has attends public school now to use them, giving priority to students with special needs and those below the poverty line. Even Lt. Gov. Reeves admitted that the voucher bill may not have the support it needs in the House.

"We have a long way to go to secure enough votes in the House of Representatives, but today's action moves us one step closer to making this a reality," Reeves said in a press release.

Callen is optimistic, however.

"I think you will see the Senate pass the bill this week, and I am optimistic that it will pass (the House) and be signed into law by the governor," he said. 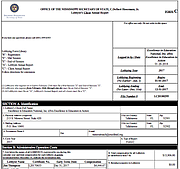 Callen said several lawmakers attended the event and that his organization spread the word about the summit. He said the summit attracts not only lawmakers but school-board members as well as Department of Education officials.

Excel in Ed, much like AFC, has state lobbying efforts as well. In 2017, it paid more than $17,000 for lobbyists and communication efforts in the state, the lobbyist's client report shows. The nonprofit does not have a specific PAC registered in the state.   Bush's nonprofit is not the only organization lobbying here for "school choice." 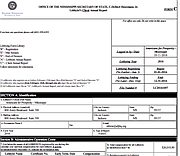 Americans for Prosperity, a Koch-brothers funded organization, has a prominent lobbying presence in the Legislature too. Recently, AFP Mississippi sponsored a social-media ad campaign on Twitter, Facebook and Instagram, in support of ESA vouchers this year. Russell Latino, the AFP Mississippi director, said that the group is not only focused on "school choice" but also on other issues at the Capitol, like tax policy. In 2016 AFP Mississippi spent $36,000 on advertising, its lobbyist's client report shows. In 2017, that number nearly doubled to more than $70,000 spent on advertising and direct mail.

"A large part of what we do as an organization is to try to raise awareness around the issues that we're focused on, and one of the ways we do that is by communicating directly with citizens," Latino said.

The organization did not file its 2017 report on time, but after the Jackson Free Press inquired about its status last week, the lobbyist's client annual report appeared online early this week. In 2017, AFP spent $491 on taking specific lawmakers out to eat and $1,190 on a reception.

The Koch brothers, conservative businessman bolstered by family oil money, are busy in Arizona at the moment after teachers' unions launched a ballot initiative to prohibit a new voucher bill in the state from becoming law. The Koch brothers are expected to team up with the Libre Institute and spend an estimated six-figure amount to educate and support Arizona's voucher law and thwart the ballot initiative, the Washington Examiner reported.

"School choice" lobby is strong and deep in the state, expanding to billionaire funding far beyond state borders to fund the push for vouchers and charters here.