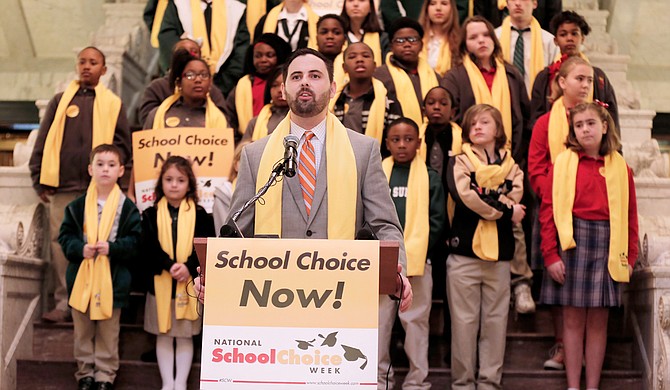 Grant Callen, president of Empower MS and a strong supporter of vouchers and charter schools, speaks to the crowd gathered at the Capitol for the National School Choice Week rally on Tuesday. Photo by Imani Khayyam.

With dozens of children bundled in primary color-coded uniforms and matching yellow scarves, the second floor of the Capitol looked like a scene from Hogwarts Tuesday morning as students, educators, and parents from surrounding private and charter schools met for a rally to kick off National School Choice Week.

Some parents, like Pelahatchie mother Martha Beard, just want what they perceive as the bare minimum, like compassion and adequate attention paid to their child. Beard said school choice-based legislation and the Education Scholarship Account voucher program were a godsend for her. She told the Jackson Free Press she applied the voucher to tuition for her disabled child at New Summit School in Jackson after the Rankin County School District told her that her child would never graduate from high school.

Criticism of "school choice" legislation includes claims that charter schools, while using public funds for operations, are not subject to the same rules and policies that protect children in normal public schools. Educators and lawmakers stressed that charter school transparency with their remarks.

"Charter schools are public schools," Jemar Tisby, interim principal of Midtown Public Charter School in Jackson, said at the rally. He encouraged those at the rally to visit his school to witness the work the students there do on a daily basis.

Gov. Bryant, a proponent of charter school and "school choice" legislation, also suggested that his reasons for supporting charter schools are, so far, agenda-free. "We are here neither for lobbyists or financial gain," Bryant said in his closing remarks.

Legislative goals for school-choice supporters at the rally include eradicating the requirement that students live within the district in which they're interested in attending a charter school. Two more charter schools, slated to open later this year, are projected to enroll more than 1,500 students by 2023.

Mayor Tony Yarber, a Democrat, though not present at the event, decreed Jan. 24 through Jan. 30 as School Choice Week in the state's capital and urged citizens to observe it. In a proclamation signed Jan. 24, the mayor claims that educational variety "not only helps to diversify our economy, but also enhances the vibrancy of our community."