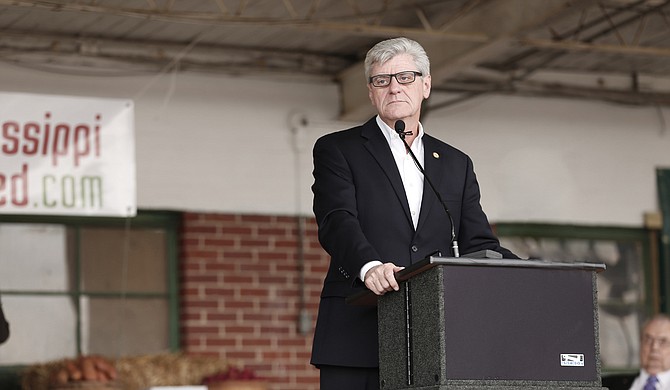 Gov. Phil Bryant celebrated a national education award this month, but made it more about school choice than the nominating committee intended. Photo by Imani Khayyam.

JACKSON — Though Mississippi often ranks low among other states in education, the state got high marks recently from a national education group this month. The Colorado-based Education Commission of the States awarded the state the Frank Newman Award for State Innovation, calling Gov. Phil Bryant’s 2013 Education Works reform legislation “transformational.”

Gov. Phil Bryant, a Republican, attributed the recognition to the state’s “school choice” efforts—which typically means charter schools or vouchers—in a press release. “Reforming and modernizing our public education system to give parents and students more choice and the opportunity for better outcomes has been a priority of my administration since I first took office,” Bryant said in an ECS press release. “Parents know their children best. Options—good options—should be available when it comes time to pick a school. I thank the Education Commission of the States for recognizing Mississippi’s work to make our public education system the most innovative in America.”

However, the president of the Education Commission of the States, Jeremy Anderson, told the Jackson Free Press that the nominating committee considered Mississippi’s Literacy-Based Promotion Act and its improved NAEP, or National Assessment of Education Progress scores, more than it did school choice and other aspects of the Education Works legislative package.

“This one wasn’t on charter-school legislation,” Anderson told the Jackson Free Press. “The governor’s quote in that press release was, but the award was really about what was done with the third-grade reading gate and the NAEP scores that they increased on.”

“Mississippi, in addition to the District of Columbia, had increases in mathematics and reading levels (on NAEP). Most states had decreases,” he said. “Does that mean Mississippi’s number one in those outcomes? No. But it means they had increases, which is significant when other states are holding the same, or unfortunately have declined.”

“There are supporters and detractors for about every piece of policy,” he said. “We’re not embracing the policy. But as far as state innovation for what the goals were with that policy, there have been some measurable improvements. “

The Education Commission of the States presents the Frank Newman Award to states for “bold and courageous policies” with “bipartisan, broad-based support” with “education improvement efforts that are replicable and hold valuable lessons for other states.”

Not all legislation recognized by the ECS enjoyed bipartisan support, however. In 2013, the Mississippi Charter Schools Law received negligible Democratic support in either chamber of the Legislature, even after the adoption of conference reports, and Democrats led the charge against their expansion this session, the first year of operation for charter schools within the state.

Grading Mississippi on an A through F rubric as opposed to its “superior to failing” system as well as the Literacy-Based Promotion Act saw virtually unanimous support; however, the third-grade reading assessment policy has seen criticism from even the current state superintendent for passing students at the lowest achievement level, even though those students might not be on reading level for academic success in the fourth grade.