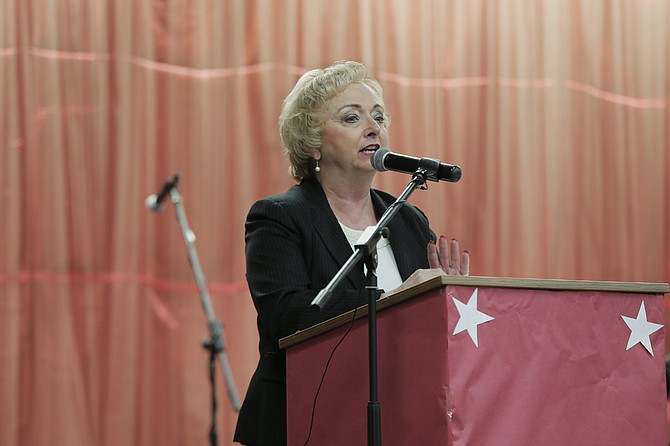 State Superintendent of Education Dr. Carey Wright says she felt licensing should stay in the hands of the Mississippi Department of Education. Photo by Imani Khayyam.

JACKSON — Mississippi leaders may establish a new agency to ensure the quality of teachers and the programs that train them.

The idea came from a task force of education leaders and stakeholders, which Gov. Phil Bryant appointed this year to look at how prepared teachers are for early literacy instruction. One of the recommendations in the task force's 71-page report suggests creating an independent board for the state's teachers that not only issues licenses but also vets the state's educator preparation programs, or EPPs—a responsibility the Mississippi Department of Education's Office of Education Licensure currently handles.

The task force's recommendations come on the heels of a January report released by the Barksdale Reading Institute, which said teachers generally lack knowledge of best practices in literacy at a time when the State is increasingly focused on making sure students are reading at grade level. The report revealed that not all teacher training programs in Mississippi are built the same when it comes to reading instruction—which might negatively affect student achievement.

"Generally, there is awareness among (teacher) candidates of the importance of applying scientific research to the teaching of reading," the authors of the report wrote. "But they have little knowledge about the research or how to apply the research to instruction."

This year, the advancement of third-grade literacy has topped priority lists for education leaders and stakeholders in Mississippi. Most recently, the State established an arm of the National Campaign for Grade-Level Reading to increase access to resources for communities to help young students be better readers.

This move complements the State's 2013 Literacy-Based Promotion Act, which developed a "reading gate" for third graders before their schools could promote them to the fourth grade. Amid criticism that the test's low standards could not accurately assess fourth-grade readiness, legislators amended the law this year to raise the bar even higher. Now, students must perform two levels above the lowest "passing" score to be promoted to fourth grade. Last year, 85.2 percent of children passed initially; after retests, 92.4 percent of all students passed.

The recommendation for an independent board in Mississippi came after results in 13 other states, eight of which are top-ranked in 2015 NAEP scores for 4th grade reading.

Dr. David Rock, dean of the school of education at the University of Mississippi and a member of the subcommittee of task-force members who made the new agency recommendation, says the point is to create a system of consistent standards for all 15 of the state's teacher preparation programs, which he says are not all governed by the Mississippi Institutions of Higher Learning board.

Teacher prep at Millsaps College, for instance, is CAEP-accredited; the Southern Association of Colleges and Schools accredits Blue Mountain College, a private Baptist university in Tupelo. So although teacher preparation is a factor in the new agency recommendation, an "annual, multi-year" review of programs is also critical to make sure they are up-to-par with state standards.   "The MDE teacher licensing area actually governs licensure so that a person who does complete a degree can actually get a license to teach. If you're a private institution, IHL doesn't govern that. I don't know who would review their program each year," Rock told the Jackson Free Press.

"John Doe has to apply to MDE (for his license) based on certain criteria. While that is true, there also should be a process where every program is continually reviewed to ensure what they're offering in the program meets the standards for licensure. MDE expects when we say they graduate, they've met those requirements, but it doesn't mean anyone's reviewing that."

"We're not all living by the same standards," so it's not consistent," he said.

Separation of Ed and State

Though the Mississippi Department of Education and the Legislature, including Gov. Phil Bryant, have worked together in order to create recent education legislation, they have not always seen eye-to-eye. The failure of last year's Initiative 42, which would have forced the state Legislature to fully fund the Mississippi Adequate Education Program, created bitter divisions not only among lawmakers past and present, but also between the Legislature and education leaders.

This year, after initially deciding to honor the White House Title IX directives that provided protections for transgender students, MDE rescinded its support after letters from GOP lawmakers expressed their disapproval and their wish for State Superintendent Dr. Carey Wright to step down if her department did not change its stance.

Wright and State Board of Education Chairwoman Rosemary Aultman disagreed with the task-force recommendations in a letter to the task force, Rock and others.

"Under the authority of the Mississippi State Board of Education, the Mississippi Department of Education is responsible for educator licensure, educator ethics and review and oversight of all educator preparation programs," the letter says. "There is no need to establish a separate bureaucracy when the MDE already has the capacity, infrastructure and systems in place to effectively administer all of the work associated with educator preparation, licensure and ethics."

Wright echoed these sentiments to the Jackson Free Press.

"When we got the recommendation we said we would agree to disagree. I think (MDE) having control over everything that relates to education is really a good idea," she said.