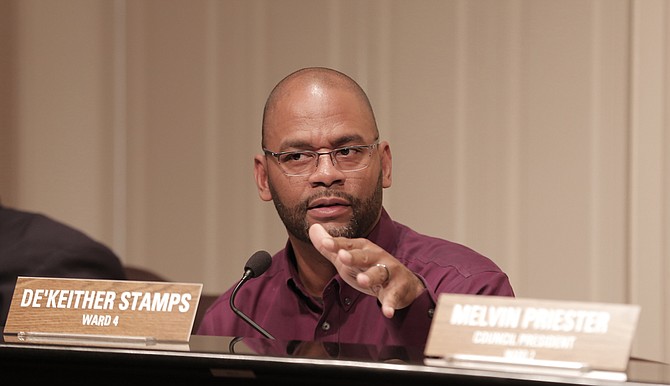 JACKSON — At the last Jackson Public Schools board meeting of the year, parents and community members crowded the board room in downtown Jackson, accidentally brushing knees together as they filled the seats. More people, smushed together in bulky coats, stood against the walls.

State Superintendent of Education Dr. Carey Wright's reprobation of the Board of Trustees made it seem even hotter.

"I have serious concerns that the district is not taking the immediate actions needed to resolve its issues related to school safety and instructional practices," Wright said at the Dec. 20 meeting. "

After dismal results on an audit of JPS earlier this year, the State Accreditation Board put the district on probation and required it to draft a corrective action plan, or CAP, to bring it back into compliance with MDE's standards. It also mandated a full audit of the district soon afterward.

Even though JPS quickly came back in compliance with many of the standards, events kept rattling the district from there. The state released accountability ratings in October, revealing the district fell from "D"- to "F"-rated. The superintendent, Dr. Cedrick Gray, resigned. MDE rejected the district's corrective action plan for not being detailed enough. MDE also complained at a Dec. 15 meeting that its presence at a recent high school visit barely affected its "culture or climate," indicated that JPS did not have a "sense of urgency" about the district's issues. MDE reps witnessed teachers pull children's arms and the lack of administrative presence, among other issues.

Although MDE accepted a second draft of the CAP at the meeting, it came with a warning of potential state takeover should JPS not comply with its corrective action plan—a warning Wright echoed to the tense audience of concerned stakeholders packed into the board room.

But the consequences for JPS might be even more dire. Not only do state takeovers yield middling results for long-term student achievement overall, but the district could lose employees, students, half its extracurricular activities and ultimately its independence.

JPS Board of Trustees President Beneta Burt told the Jackson Free Press that she was thankful the State had been so helpful to the district to help correct its issues. But, Burt said, it was unfortunate that MDE still saw a lack of urgency when the district had been "stressing the opposite."

"It is now on us to make sure not only the perception changes, but that (reality) changes," Burt told the Jackson Free Press. "We cannot allow our school district to fall into receivership.

In Mississippi, the State government can take control of a school district if more than half its schools are failing; the district has been failing two years in a row; and if the State deems the safety and security of its students compromised. The State has taken over 17 districts since 1996, The Hechinger Report reported.

Two districts, North Panola and the now-consolidated Oktibbeha district, taken over in the 1990s and then returned to local control, fell back into the State's hands a decade later. In the Okolona Separate School District, two years of state takeover did not bring lasting change. The year after the State left Okolona in 2012, only 14 percent of third graders scored proficient or advanced on the reading test. That same year, only 73 percent of Okolona's seniors graduated. A year later, a little more than half the seniors graduated high school.

"It's really hard to find many examples of state takeovers that have led to dramatically different performance," said Michael Petrilli, vice president of the Fordham Institute, in a 2014 Hechinger Report story.

But JPS' problems are not unique. Poverty stands as a significant barrier to student achievement inside and outside the classroom in the state's only urban district, which serves nearly 27,000 students, with 80 percent getting free or reduced lunch.

Cyclical poverty affects everything from how likely it is students will enter or leave kindergarten literate to whether or not they eat enough food when they're home for the summers—just like other high-poverty, urban districts around the country.

Regardless of hardship, the stakes are high for the district. "It's a house under repair, and we're being inspected at the same time," interim Superintendent Dr. Freddrick Murray said about the district's struggles after the Dec. 15 meeting.

Jackson Ward 4 Councilman De'Keither Stamps said at the Dec. 20 board meeting that the district needed a "Joe Clark" in charge, referencing a no-nonsense principal that Morgan Freeman depicted in the 1989 film "Lean on Me."

Stamps said the next 100 days for the district re critical to its success, and that deeper, systemic issues, like funding for schools and parents correcting student behavior before they entered the classroom, would have to be paramount going forward. "We cannot allow the schools to fall into the hands of the same people who run the prisons," he told the Jackson Free Press.

Wright said at the meeting that MDE would continue offering support to the district, but that change would have to come from school leaders as well as the community. She also said it was neither MDE's "desire or intent" to recommend takeover for Jackson Public Schools.

"It is our hope that JPS will use this process as an opportunity to address the areas of concern," Wright said.