Jackson School Board Off to Slow Start on Supe Search, Seeks Public Input 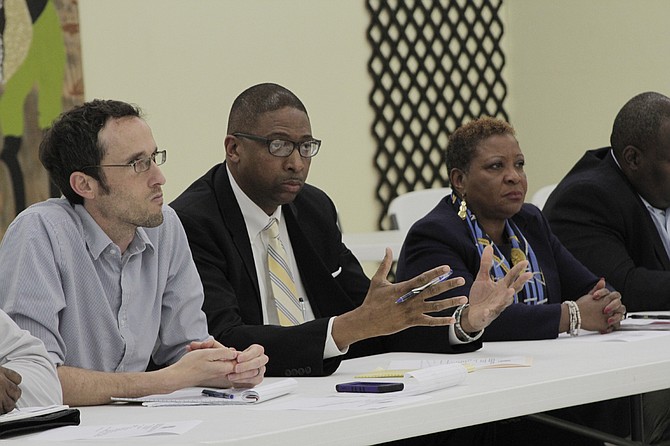 Members of the JPS School Board of Trustees Jed Oppenheim (left), Rickey Jones (center) and Beneta Burt (right), discussed the search for a new superintendent and heard public input at a work session on Jan. 3. Photo by Arielle Dreher.

With Dr. Cedrick Gray leaving the top position early last November, Jackson Public Schools needs a new superintendent and invited public comment regarding the search at its Jan. 3 work session. Community groups and parents voiced concerns about the superintendent search occurring while the district works to meet goals of its corrective action plan, adopted to avoid a takeover by the Mississippi Department of Education.

Board President Beneta Burt reiterated several times that the district was not planning on a takeover and would not think that way.

"We are going to work hard to make sure that MDE does not take over, because we are doing what's required to get our district back to where it certainly should be," Burt said Tuesday. She was responding to concerns about the superintendent search being pointless if the Mississippi Department of Education is going to take over the school district.

Board attorney Dorian Turner outlined the board's options for finding a new leader: hire internally or conduct a search. If the board elects to conduct a search, it will need to decide how to search, whether through a consultant, an advisory committee or other outside help.

"There is no process that you are required to follow; I can give you information about what the district has done in the past ... but you don't even have to conduct a search. You can decide to promote someone internally," Turner told the board.

If the board decides to hire a consultant, it will have to decide whether to search nationally, regionally or statewide. Searches can take as short as two to three months or as long as half a year, Turner told the board.

At the start of the work session, it appeared the board would vote on whether or not to hire a consultant, but after hearing public comments from local groups, parents and community members, the board backed off.

Rev. Jim Carstensen, the chairman of the Mississippi Religious Leadership Conference, asked the board if they have a list of priorities and things they are looking for in a new superintendent.

Burt said the board had not done that, yet, and that the reason for holding a work session was to get some of those ideas.

Parents and community members asked that the superintendent search process be transparent, and local civic group Working Together Jackson asked the board to host community forums in the next 100 days.

Several public comments centered on the impending takeover of the district, pointing to problems with trying to hire a superintendent for a district with a corrective action plan and the potential for their job to be in jeopardy. Burt said that applicants would need to be prepared for the challenges that JPS faces.

Board members agreed, but also acknowledged that finding a new superintendent would not remedy the district's myriad problems that need to be fixed to comply with the corrective action plan.

"If we're focused on thinking that our problem is our superintendent, we've got a bigger issue—we're fooling ourselves," board member Richard Lind said. "I think we have a 'system problem,' which means that it covers everybody."

The vice president of the board, Rickey Jones, moved to table discussion of a consultant until the board had discussed what the district needs in a superintendent.

"(Let's) do a needs analysis to put everything together and then look at the motion of looking at a consultant or firm or whatever we need to do," Jones said. "I think there's a deep-dive conversation that we need to have as a board that we should have had before now."

The board voted 5-2 in favor of Jones' motion to table the consultant discussion, and board member Kimberly Campbell asked that the board quickly set a meeting and keep the process moving.

"MDE is watching us, we are on the clock, and I know some people say we don't want to rush, and I understand that, but MDE has said we need to get this process moving," Campbell said Tuesday. "They (MDE) have already said we are already behind in this process."

After the board went into executive session, they decided not to meet again before their next regularly scheduled meeting on Tuesday, Jan. 10. Instead they requested material from the board's attorney about their options, and discussions about the superintendent will continue next Tuesday.