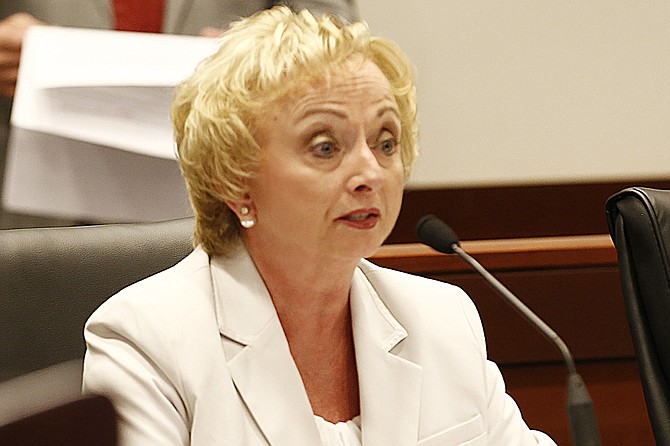 State Superintendent Carey Wright said the committee in charge of establishing the Achievement School District will use the 2017 accountability results released today to decide which schools and districts to absorb into the new statewide district. Photo by Imani Khayyam.

JACKSON — Updated: This story has been updated to reflect that the change in baseline scores would not affect Reimagine Prep and Smilow Prep, although MDE stated that in the meeting . Both charter schools received "D" grades with or without the new baseline.

The Mississippi Department of Education released the 2017 accountability rankings of all schools and districts in the state this morning. Seventy percent of the state's schools are performing at "C" grade or higher. Nine districts received an "F" grade, including Jackson Public Schools.

Overall, however, schools and districts across the state improved.

"We saw an increase in proficiency across all subject areas," Paula Vanderford, MDE chief accountability officer, told the board. "... When you look at 2016 to 2017 results of the districts, 83 percent of them improved in math proficiency and 85 percent in English language arts."

Some districts got a break this year, after the state board adjusted the baseline for cut scores but allowed districts to take the better of their two grades when evaluated under the new and the old baseline for grades. Going forward, districts will have to score a bit higher to receive each letter grade on the state's ranking scale.

The board also approved language for the Achievement School District, which the Mississippi Legislature created to absorb the state's "failing" schools and districts into a statewide district with its own superintendent.

Districts that receive an "F" grade for two years in a row, or in two of three years in a row, as well as have 50 percent of their schools or students in "F" rated schools are eligible for the Achievement School District if the new district has the capacity to serve the students, state law says.

With the board's approval of the Achievement School District selection criteria, the committee governing the new statewide district can begin selecting schools and districts that they want to include in the ASD, using the accountability rankings released today. State Superintendent Carey Wright said the state board and Chairwoman Rosemary Aultman could start the search for the Achievement School District superintendent. She advised that the committee choose the districts and schools before finding a superintendent.

"I don't know that I would apply for (a position where) I didn't know what I was applying for because the last thing we want to do is hire a superintendent, identify the districts, and then they back out," Wright told the state board. "... I would rather them know what they're getting into."

JPS as a district would qualify for the Achievement School District with its second "F" grade in a row, and the fact that 30 of the 58 schools in the district received an "F" grade in 2017. The ASD committee has to determine whether or not the new ASD has the capacity to serve the second-largest school district in the state.

The Achievement School District is separate from the a state takeover of a school district due to an "extreme emergency," and Wright said it is scheduled to begin operations in the 2018-2019 school year.

In September, the state board recommended that the governor sign an emergency declaration in JPS, but Gov. Phil Bryant seemed hesitant as of yesterday. He told the Associated Press that he is considering another option for the district, mentioning that he is in discussions with the W.K. Kellogg Foundation, which has an office in Mississippi and funds programs to help children in the state.

The Mississippi Board of Education is scheduled to have a work session after its regular board meeting today to discuss the potential takeover of JPS, in anticipation of the governor signing the extreme emergency resolution. At press time, the state board was not finished with its regular meeting and had gone to lunch for 45 minutes.

Correction: A previous version of this story said that Reimagine Prep and Smilow Prep, both charter schools in Jackson, benefited from the baseline change bump. This is not correct, although MDE stated it the public meeting today. Both Reimagine and Smilow received "D" grades with or without the baseline change, according to the data. Email state reporter Arielle Dreher at [email protected] and follow her on Twitter @arielle_amara for breaking news. Read more stories at jfp.ms/jpstakeover.