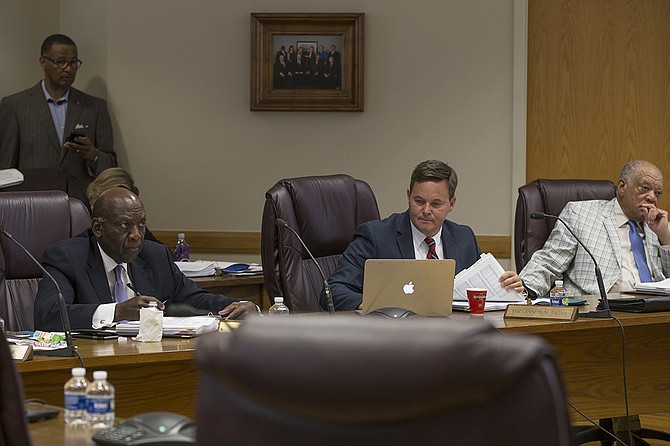 Mississippi Board of Education members John Kelly, Jason Dean and Charles McClelland (left to right) all had questions about changing the baseline for state test scores at the board’s meeting on Thursday, Aug. 17. Photo by Imani Khayyam.

JACKSON — The state's public-school district officials can breathe a sign of relief—for now. The Mississippi Board of Education approved a new baseline for state test scores last week that will affect what grade the schools and districts earn in the school's accountability ranking system.

The state board's decision to change the baseline was not unanimous or without tremendous debate. It was standing room only Aug. 17 in the board's Jackson meeting room, as stakeholders from some of the state's top- and bottom-ranked school districts anxiously waited to see how the board's changes to the state test score baseline would affect their students.

The change was abrupt and caught school-board members off guard last week. Board member Charles McClelland said a superintendent from a "failing" school district called him almost in tears over the proposed change.

"He said he was hired by (his district's school) board to come up with a plan to meet what we have put out as a department to show growth," McClelland said of that superintendent at the Mississippi school board meeting last week. "He put together a plan, he said, and the board bought into that and he went to his staff and students to get them to buy into this plan, he said that they bought into the plan, and (there was) excitement from students feeling that they were improving."

McClelland said the superintendent was excited with the projected growth in his failing district because it looked like some of the previously ranked "F" schools would move up in their ranks. Then he heard about the news of the proposed new baseline for scores on the Mississippi Academic Assessment Program, named MAAP for short, and called McClelland.

"'How can I go back to my board and back to my students and say, 'look, I told you all this, but we're going to change ball game?'" the superintendent had asked McClelland, who expressed concerns about the changes happening so soon before the accountability results go public.

"I have a problem with that. When you've got him and teachers thinking one way and then we change it, that's not right," McClelland told the state board last week.

The decision to change the baseline, while technical in nature, is political in practice. Test scores make up a large part of a school's and a district's accountability ranking or grade. Schools and districts are both graded on a scale of A through F, and Mississippi legislators make policy based on letter grades.

Changing the baseline for test scores has significant consequences mainly for the school districts at the top and the bottom of the state's accountability rankings, which meant some school-board members were vocally resistant to the proposed changes.

Mississippi Department of Education officials suggested an amended proposal for implementing the new score baseline, which the board ended up approving after about an hour and half of combined debate on the matter.

Paula Vanderford, chief accountability officer at MDE, suggested that the department publish both school and district grades without the baseline score changes and with the new baseline score changes. Whichever baseline gives the school or district a better grade, it can keep for the 2016-2017 results only. Going forward, however, MDE's accountability officials will evaluate all schools on the new baseline.

Some board members felt more comfortable with the amendment than they did about just changing the baseline scores without giving the districts advance notice. "This is not a pure science. ... I think we all are acknowledging we're going to have to make a change," board member John Kelly said. "No district should be harmed this year (under the amended proposal)."

State Superintendent Carey Wright assured board members that the department equally applied measures used to grade state tests to all schools and districts regardless of their letter grades. MDE awards each school and district a certain number of points each year, so districts can see how many more points they will need to improve in the following years, to meet the new baseline of cut scores.

Most board members, though, wanted to know the reason for the baseline change in the first place.

How We Got Here

The 2016-2017 school year was the second year in a row that students took the MAAP exams in third through eighth grade as well as once in high school to assess their English language arts and mathematics skills. Before changing the state assessments to MAAP, MDE used a different test in 2015 and a separate test in 2014, as the state worked to find a test to meet federal and state standards.

The volatility of students taking three different assessments over three years left the MDE Board with having to take what board President Rosemary Aultman called "a shot in the dark" at setting a baseline for student test scores last year.

School districts came to MDE concerned about potential inflation of test scores, and future scores looking too improved and not realistic to keep up with, Vanderford told the school board.

Vanderford and her team took the school districts' concerns to the Technical Advisory Committee, made up of primarily out-of-state analysts and people who work in student testing. The TAC suggested that MDE change the baseline, and in turn, the state's Commission on School Accreditation seconded the recommendation after a contentious meeting.

Dr. Christopher Domaleski, who chairs TAC, said the board had a problem with its growth mechanism in evaluating state test scores.

"If you're starting from an artificially inflated spot, which is what we had in 2016, then the ability to show progress from 2016-2017 is going to be inflated," Domaleski told the board over a conference call at the Aug. 17 meeting. "... The recommendation is to have growth more accurately portrayed (and show) the real achievement that's occurring in the state."

When MDE releases accountability results for last school year in October, schools and districts will get to accept their best grade of the two results—one calculated using the old baseline, one using the new baseline. Presumably, most schools and districts will take the better of the two grades to avoid or benefit from Legislature-approved programs.

Schools that earn an "A" or "B" grade in the coming school year could benefit from the School Recognition Program, a salary increase for teachers in those schools. The Legislature approved funding over $20 million for the program in 2017 for a salary increase for teachers in "A" and "B" schools as well as any school that improves a letter grade. Under the new baseline, the number of "A" rated schools will jump from 64 to 88, preliminary data from MDE show. The number of "B" schools will drop slightly under the new baseline from 241 to 237.

That is, more than 300 schools, not including those that improve a letter grade, could see a teacher pay bump. The school board could address policy affected by their baseline change at their September board meeting.

The nine school districts that would have earned an "F" under the new baseline but will be able to slide by with a "D" this year using the old baseline scores, will avoid being absorbed into the state's Achievement School District, for now.

The state's Achievement School District is MDE's proposed method for absorbing some of Mississippi's struggling school districts and schools into a new state-run district. Any district or school that received an "F" grade two years in a row or in two of the past three years.

The state school board approved a search for a superintendent to run the new district at the meeting last week. The ASD will begin in the 2017-2018 school year.

Districts feared that changing the baseline would solidify their absorption into the new statewide school district. But preliminary data show that most districts, or at least a total of nine districts, in danger of dropping to an "F" will get a year to improve their scores dramatically under the new baseline.