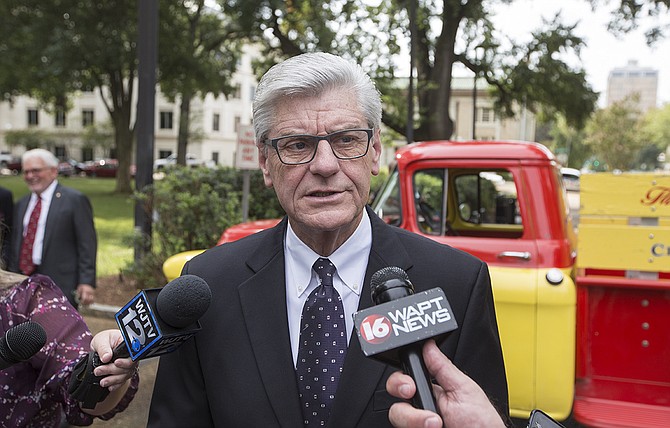 Gov. Phil Bryant said Wednesday that he's seeking a "third way" between no action and declaring an emergency. That latter move means the Mississippi Department of Education would depose current leaders and appoint an interim superintendent with no local school board. Photo by Imani Khayyam.

Gov. Phil Bryant said Wednesday that he's seeking a "third way" between no action and declaring an emergency. That latter move means the Mississippi Department of Education would depose current leaders and appoint an interim superintendent with no local school board.

The state Board of Education last month asked Bryant to sign an emergency declaration, saying the 27,000-student district is violating 24 of 32 state accrediting standards. Allegations against the district include seniors graduating without showing they met requirements, teachers providing ineffective instruction and schools bring unsafe.

Bryant has in the past signed every emergency declaration the board requested, although he delayed a takeover of Scott County for a time. He said Thursday that Jackson is different, though, because it's larger and is the state's only urban school district.

Bryant said he's consulted with the Kellogg Foundation, saying the foundation is supporting struggling schools in its hometown of Battle Creek, Michigan.

"We're looking very closely at this," he said. "There are some other options we're working on.

Bryant earlier said he wanted to see whether the state's second-largest district would improve its F rating when grades are released Thursday before making a decision. Education officials said Tuesday that Jackson would rate third-worst among the state's 140-plus school districts. Nine districts overall will get failing grades, they said.

The Board of Education has scheduled a Thursday afternoon work session to discuss its plans for the takeover and seems to expect action by Bryant. Though the governor says students "deserve better," he also says he's not going to be rushed into making a decision.

Patrice Guilfoyle, a spokeswoman for the Department of Education, said Wednesday that education officials have had no recent conversations with Bryant about the subject. The governor has in the past had strained relations with state Superintendent Carey Wright.

It's unclear if other options would be legal. Jackson Mayor Chokwe Lumumba has proposed that he be put in charge of the school system, but there's no clear mechanism in state law to allow that. The law could allow for the Board of Education to put the mayor in charge when it returns the system to local control, but that's never been done before in Mississippi.

Lumumba, Democratic lawmakers and others have been lobbying the Republican Bryant to refuse the takeover. Others have sued. The district argues that many violations are old news and have been fixed.

If the Jackson district is taken over, it could have a long stay under state control. A law enacted earlier this year by the Legislature suggests that any district with an academic rating of D or F should achieve a C rating for five consecutive years before the state returns it to local control.

The Mississippi Department of Education has, in the past, struggled to improve academic performance in districts it takes over, although officials have suggested recent takeovers in Aberdeen and Tunica County have showed better results.

Unlike in the past, a takeover would not immediately affect athletic and other extracurricular activities. They would be limited if state officials return later and revoke the district's accreditation.