JPS On Probation, Full Audit Ahead 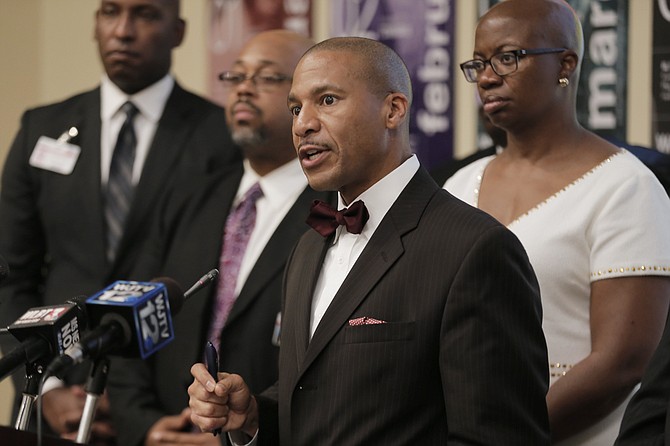 JACKSON — Jackson Public Schools Superintendent Cedrick Gray says that the district plans to install GPS systems on buses to track their routes, ensure that each school has working fire extinguishers and has "beefed up" the presence of law enforcement in its schools to ensure a "safe and orderly" environment.

The actions are among those the superintendent is promising in response to a state commission placing the state's largest urban school district on probation earlier this week for being out of compliance with 22 of 32 of the state's accreditation policies. MDE was mainly concerned with the district's graduating students who might not have completed all graduation requirements, as well as inadequate school safety.

The motion to put JPS on probation passed with a unanimous vote at an Aug. 16 meeting of the Mississippi Department of Education's Commission on School Accreditation. The MDE conducted an audit of the district from April 4 to 22 of this year. On June 16, MDE recommended that the district downgrade its status from accredited to probation for the compliance issues.

Vanderford says JPS has communicated with MDE about its struggles. Superintendent Dr. Cedrick Gray met with state Superintendent Carey Wright last week about technical support needed for his district, and the district has submitted plans for immediate and long-term resolutions to their compliance issues.

Since the initial report, JPS has cleared process standard 9 on the district's strategic plan, and 15, which concerns professional development, and has partly completed compliance on professional licensure. Still, Vanderford says, the district is still out of compliance with 19 of 29 standards, including No. 2.1, which require them to record and submit data to MDE. Vanderford says the commission found JPS' plan to address school safety inadequate.

One commission member expressed concerns that the entire district might be out of compliance because the audit that prompted the probation only used data from a sample set of schools. Another motion, by commission member Ann Jones of Jackson, asked that MDE conduct a full audit of the district's schools, and passed with seven votes. Vanderford said the audit would probably take most of the 2016-2017 school year.

Gray was not allowed to address the board at the meeting as the district waived its opportunity to have a hearing. Though JPS submitted a plan to address its compliance issues, Gray says the reason JPS did not request a hearing is because it "did not have enough information" to respond, and that he felt that some of the citations in the audit were "subjective."

JPS also pushes back on MDE's claim that it doesn't have a student code of conduct; it does. When asked specifically what information was missing that made JPS uncomfortable with having a hearing, Gray gave examples of bureaucratic issues, like MDE saying certain student files were incomplete, making them ineligible for graduation. Gray says, however, that JPS has digital evidence of whether or not students meet graduation requirements even if the paperwork isn't all there.

JPS has 60 days to develop a Corrective Active Plan with MDE to address the district's problems, and to provide a timeline for when those actions will be completed. The district would only come off probation when they are back in compliance with state standards.

JPS says students and district employees should expect no negative impact from the probation. The district says its athletic and scholarship programs will not be affected, that students will continue to receive Carnegie units toward graduation, and that the probation should not affect students' ability to graduate, be awarded an accredited diploma and attend college.

"We're still going to do school every day," Gray said after the commission meeting. "We're going to take care of our business."