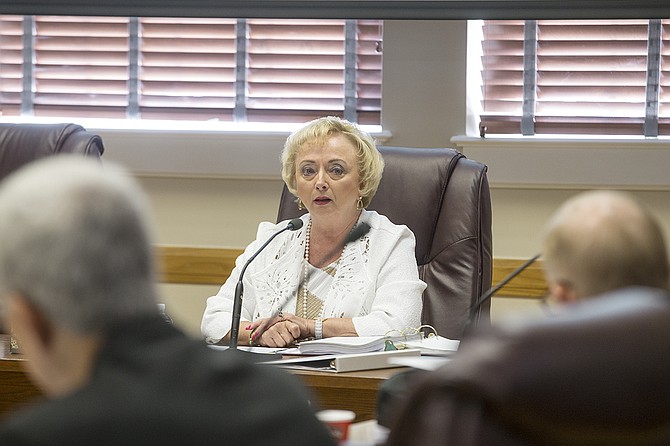 State Superintendent Carey Wright said the Jackson Public Schools audit report was the result of an 18-month investigation into the district that found it to be out of compliance with 24 of the 32 accreditation standards. Photo by Imani Khayyam.

JACKSON — UPDATE: This story has been updated with a response from Jackson Public Schools' Interim Superintendent Freddrick Murray.

The fate of Jackson Public Schools is in the hands of a few statewide commission and board members. The district is in violation of 24 of the state's 32 accreditation standards, a 680-page investigative audit report released today by the Mississippi Department of Education shows.

"We conducted this (2016) audit because state law requires the MDE to periodically audit all districts rated C, D or F," Wright said in prepared remarks, released in a Youtube video.

The August 2016 audit prompted a full investigative audit of every school in the district, and now the fate of the second largest district in the state rests in the decision-making powers of the Mississippi Commission on School Accreditation.

JPS maintained a "D" grade from 2013 through 2015 but received its first "F" grade in the 2015-2016 school year. The full investigative audit took place during a tumultuous time for the district. With former Superintendent Cedrick Gray resigning in November 2016, the school board's decision to hold off on a superintendent search and then several school-board members vacating their positions, JPS has been in constant flux this past year.

The commission will meet Sept. 13 to decide "whether an extreme emergency exists ... that jeopardizes the safety, security or educational interests of the children enrolled in the schools in the district," the cover letter addressed to interim Superintendent Freddrick Murray and school board Vice President Camille Simms says.

Murray and Simms, along with other district employees and school-board members, will have an opportunity to address the commission at the meeting, and attorneys representing JPS and MDE will get to address commission members, too.

"I understand that the upcoming meetings will generate a lot of discussions, and I encourage all stakeholders to stay informed," Wright said in her video remarks.

If the commission agrees that JPS is an "emergency" situation, the Mississippi Board of Education could approve that decision at its meeting the next day and ask Gov. Phil Bryant to declare a state of emergency in the school district.

"On Thursday, August 31, 2017, the Jackson Public School District received the results from a full investigative audit of 58 schools from the Mississippi Department of Education (MDE). The audit took place from September 6, 2016, through July 31, 2017," Murray said. "The Board of Trustees, interim superintendent, and administrative leaders of the school district are carefully reviewing the nearly 700 page report. We look forward to the opportunity to address these findings on September 13, 2017."