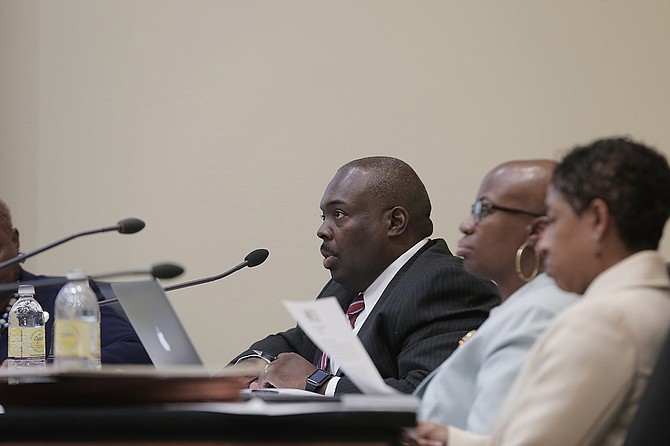 The Jackson Public Schools Board and Interim Superintendent Freddrick Murray (pictured) responded to the State’s corrective action plan with improvements, but not enough, a new Mississippi Department of Education audit found. Photo by Imani Khayyam.

JACKSON — The future of Jackson Public Schools is uncertain after a recent audit investigation found the district has hundreds of unfilled and uncertified teacher slots; inconsistent board-to-district policies; and did not teach graduating seniors enough days to qualify for graduation. The Mississippi Department of Education released a 680-page investigative audit report showing that JPS is in violation of 24 of the state's 32 accreditation standards.

"We conducted this (2016) audit because state law requires the MDE to periodically audit all districts rated C, D or F," Wright said in prepared remarks released to the media in a Youtube video instead of a press conference.

The August 2016 audit prompted a full investigative audit of every school in the district. JPS maintained a "D" grade from 2013 through 2015 but received its first "F" grade in the 2015-2016 school year. The full investigative audit took place during a tumultuous time for the district. JPS has been in constant flux this past year with former Superintendent Cedrick Gray resigning in November 2016, the school board's decision to hold off on a superintendent search and then several school-board members vacating their positions.

The commission will meet Sept. 13 to decide "whether an extreme emergency exists ... that jeopardizes the safety, security or educational interests of the children enrolled in the schools in the district," the cover letter addressed to interim Superintendent Freddrick Murray and school board Vice President Camille Simms says.

Murray and Simms, along with other district employees and school-board members, will address the commission on Sept. 13, and attorneys representing JPS and MDE will get to address commission members, too.

"I understand that the upcoming meetings will generate a lot of discussions, and I encourage all stakeholders to stay informed," Wright said in her video remarks.

If the commission agrees that JPS is an "emergency" situation, the Mississippi Board of Education could approve that decision at its meeting the next day and ask Gov. Phil Bryant to declare a state of emergency in the school district.

JPS released a statement from Murray saying his staff and board members were reviewing the audit report—but little else.

What the Audit Says

The audit shows that blame for the district missing the mark lies not only on the administrative leaders but also on the Board of Trustees, as well as the lack of qualified teachers and funds to support a district as large as JPS.

"The board failed to ensure that it provided proper governance and leadership in the District," the audit report says.

One of JPS' main challenges is recruiting enough teachers, especially ones qualified in the areas they are teaching. The audit shows 190 staff vacancies in the 2016-2017 school year, as well as almost 300 teachers who did not hold a valid teacher's license or proper endorsements for the subject they taught. Consequently, school librarians served in multiple capacities, and not all high schools were able to offer AP courses last school year.

JPS has lost students over the past five years. In the 2012-2013 school year, the district enrolled nearly 30,000 students. Last year, 26,948 students enrolled in the district. With the growing populations of the three charter schools in the city, the district loses not only students but also state funds that follow them to those schools.

Enrollment is important for funds that come from the Mississippi Adequate Education Program, which is based largely on enrollment and attendance.

What Does 'Emergency' Mean?

It would have the authority to assign an interim conservator or contract a private entity to take over the administrative and management powers of the district.

The conservator could take over all financial obligations of the district, including employment decisions, personnel decisions, contract agreements and all decisions about the district's finances. JPS would have to pay for the conservator out of its own district funds other than MAEP dollars, state law says. If the district has unpaid balances, however, those can be withheld from the state's MAEP funds.

Beyond conservatorship, the Mississippi Board of Education will also have the power to grant transfers to students who attend JPS who want to leave the district, if it is declared to be in an "emergency."

State law says that parents with children enrolled in "emergency" districts can file petitions to the Commission on School Accreditation for a transfer. If granted a transfer, that child takes all of his or her MAEP funding and add-on program costs with them to their new school district.

Whether or not the commission or the board will choose to put JPS in emergency status remains to be seen.

The Commission on School Accreditation meets Wednesday, Sept. 13, to hear both sides of the audit results. MDE and JPS officials will address the commission. The State Board of Education meets on Thursday, Sept. 14, meaning it could take up any recommendation from the commission as soon as the next day.