DA Smith on Police Shootings, Being a Victim 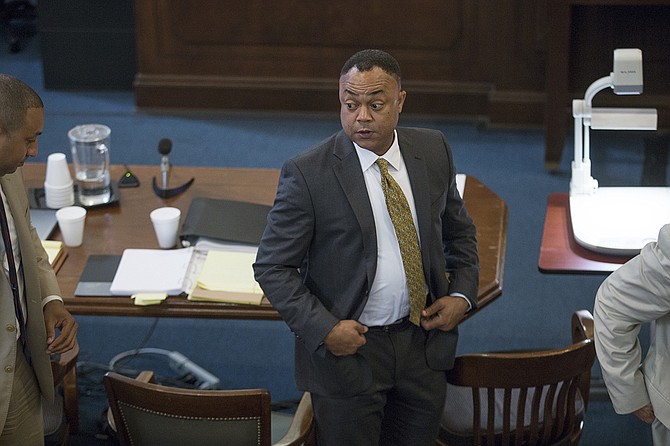 On June 18, 2018, Hinds County District Attorney Robert Shuler Smith spoke to Jackson’s officer-ID task force about how officer-involved shooting cases go through the system. He is pictured here during one of his trials. Photo by Imani Khayyam.

JACKSON — For the better part of last week's officer-identification task-force meeting at the Jackson Municipal Art Gallery, some of the members didn't know they had a prominent guest.

In its sixth meeting since April without any recommendation, the group carried on its usual banter and monologues about policing, which some members would agree are getting a bit repetitive. It wasn't until the task force's co-chair, attorney CJ Lawrence, mentioned that he wanted to ask the district attorney how many officers his office has indicted that everyone realized that Robert Shuler Smith was in the room.

"Is he here?" Paul Hobson, a Jackson Police Department detective, asked as he looked around the room.

The Hinds County district attorney sat quietly at the end of an L-shaped meeting table inside the City's art gallery—a former stately home tucked behind tall trees and flora that line the garden entryway. Smith sipped from a 20-ounce plastic bottle of Coca-Cola and plucked potato chips carefully without rustling the bag.

After his snack, he scribbled notes randomly with a No. 2 yellow pencil.

Jackson's officer-ID task force invited the district attorney of Mississippi's largest county to speak to them about how officer-involved shootings go through the local criminal-justice system.

Smith's public appearances in the last two years have mainly been in circuit courts as he battled charges that range from hindering prosecution to domestic violence. His Rankin County domestic-violence trial will resume in the fall, after nearly a year of court-ordered delay.

Hinds County DA Robert Shuler Smith's domestic violence trial, which was scheduled for this Monday, has been continued by order of the Court until September 10, 2018.

Translation: you have plenty of time to read up on past @JxnFreePress coverage of him: https://t.co/4mJXVqry78 pic.twitter.com/e5zFdYzDne

At the June 18 meeting, however, Smith spoke about laws he enforces instead of laws he had been accused of violating. The DA demonstrated that he, in theory, supports progressive measures and national trends on transparency around officer-involved shootings, but, to date, he has not wielded his power as district attorney to make them a reality in Hinds County.

DA Smith spoke in a cool and collected manner as he divulged as much information as he could about the grand-jury system and even spoke vaguely about cases currently under investigation in his office.

Smith said he did not recall an officer in Hinds County ever being indicted for an officer-involved shooting in his ten-year tenure as district attorney. In April, at least four JPD officers were "no-billed" in three deadly officer-involved shootings spanning from November to February, meaning that those cases will not go to trial unless the district attorney's office decides to investigate further.

Before a grand jury convenes, the district attorney's office receives a case file. Smith said the first thing he and his attorneys do is look at the investigating agency and determine whether or not there has been a thorough investigation.

"We prefer for an outside agency besides JPD to investigate these cases," the district attorney said. "We have a few cases that we're reviewing at this time because the families deserve answers."

Smith spoke of one current case in which his office realized that no one had interviewed a number of witnesses to an officer-involved shooting. He said that case would have to go back to the grand jury because families often hire private attorneys who can gather evidence before the district attorney's office gets to it, posing a problem if they do not cover all the bases in the investigative process.

"But (the investigation) certainly has to be very thorough because, again, we've seen some surprise press conferences where the families are standing outside and complaining, and that's something that we need to address before it continues," Smith said.

Notably, Baltimore-based attorney Jason Downs and the family of 21-year-old Crystalline Barnes held an impromptu press conference on the lawn outside Jackson City Hall in May to reveal that Downs' investigation had found details inconsistent with JPD's internal investigation into the traffic stop that resulted in two officers fatally shooting Barnes.

Downs also released the names of JPD Officers Rakasha Adams and Albert Taylor, believed to have killed Barnes. Their names are on the April no-bill list, with Adams appearing a second time for a separate deadly on-the-job-shooting in November 2017.

Downs ultimately filed a petition against the City of Jackson to divulge information in Barnes', case, putting the onus on city officials and police chiefs to be transparent, as is the national trend.

District attorneys have immense powers to change and reform the criminal-justice system. At the meeting, Smith was under the impression that the purpose of the task force was to decide policy that would make everyone at the table, including him, comfortable, and he seemed willing to go along with whatever the end recommendations shall be.

To have Smith's support in releasing names should Jackson follow the lead of many other U.S. cities would be the Crisco that eased the system along. But, he has the legal power to do much more than that, like progressive district attorneys nationwide.

"I have—like a lot of civil-rights lawyers, like a lot of activists—been beating my head against the wall of the DA's office and the (Philadelphia) police department for a long time because the DA's office in Philly was not enforcing the law against police. Somebody had to do it," he told Business Insider.

Philadelphia is a distinctive place for a progressive district attorney, because he has the power to make a huge difference in a city with a staggering incarceration rate and the highest poverty rate for a big city in the U.S.

The DOJ's assessment of deadly force in the Philadelphia Police Department led to the best-practices recommendation to release names in 72 hours following an officer-involved shooting.

Krasner didn't just run on rhetoric, either. Earlier this month, the Philadelphia Inquirer reported that Krasner's office "asked the city's Police Department for nearly a decade's accounting of serious violations by its officers so it can compile a comprehensive roster of those who have lied while on duty, used excessive force, racially profiled, or violated civil rights."

The goal is to have more transparency around officers who appear as witnesses, although Krasner has not yet decided if the list would become public.

Transformation is happening in the South too. Kim Ogg, the district attorney of Harris County, Texas—which includes Houston—decriminalized small  possessions of marijuana, which diverted 576 people from jail in the first six weeks following her decision and saved the county more than $1.5 million, she told the Texas Observer. She diverts them to drug-education programs instead.

Aramis Ayala, the state's attorney in a district near Orlando, Fla., and the first black state attorney in Florida history, decided not to use the death penalty in her district, despite pressure to implement it in high-profile cases or police killings.

These district and state's attorneys are among a growing class of reformers using their power as the highest prosecutors in their respective areas to enact change.

Many of them unseated longstanding conservative attorneys, including one in the state of Mississippi. Scott Colom, the district attorney in the 16th district that includes Noxubee, Clay, Oktibbeha and Lowndes Counties, defeated Forrest Allgood who had held the position since 1989. The Washington Post coined Allgood as "one of America's worst prosecutors."

Colom ran on the platform that tough-on-crime policies, such as Allgood's, don't work. In 2015 he told Slate that district attorneys should exercise more discretion when it comes to non-violent drug offenders and young people in the system.

During Colom's campaign for district attorney, he tried to inform people of the role's powers, and was "shocked" to find how few people know what DAs actually do. He sought messaging that would stick.

"What really, really resonates with people is when you say, 'We're sending too many young people to jail.' A lot of people agree with that statement. They don't have to understand what the district attorney does," Colom said.

DA Smith left the task-force meeting to take a call after his cell phone chimed to the Firefly ringtone on AT&T phones—watch any of the company's commercials, and you'd be familiar with the sound.

An hour into questions from journalists and task-force members, Smith posed a question himself—he wanted to know what Adofo Minka, a criminal-defense attorney who often attends the meetings and writes occasional opinion columns for the Jackson Free Press, thought about the policy of releasing names within 72 hours.

Minka believes the names should be released immediately and that police officers should get the same treatment as any other citizen who discharges a weapon.

While Smith has not proved to be a progressive leader in his role as district attorney, he knows what it is like to be on the other side of a grand jury indictment and to have a mugshot publicly circulated like many arrestees in the Jackson metro area.

Ironically, however, Smith's defense in cases where the State of Mississippi accused him of tampering with prosecutions was that he was trying to protect an innocent man. But Smith did not go through an obviously legal procedure to help Christopher Butler, later convicted of wire fraud and drug trafficking in separate cases.

Instead, Smith shouted at judges and claimed the Mississippi Bureau of Narcotics tampered with video surveillance that his office never fully reviewed. A second jury believed Smith, after his first trial ended with a hung jury, and ultimately, a mistrial.

Smith continued to listen as Minka detailed his issues with grand juries.

"These are institutions of secrecy and deception sometimes, so we hold these institutions up like they're some kind of holy grail, but if we look at them from a historical standpoint, they have degraded people...," Minka said.

"I've been a victim of that," the Hinds County district attorney replied.