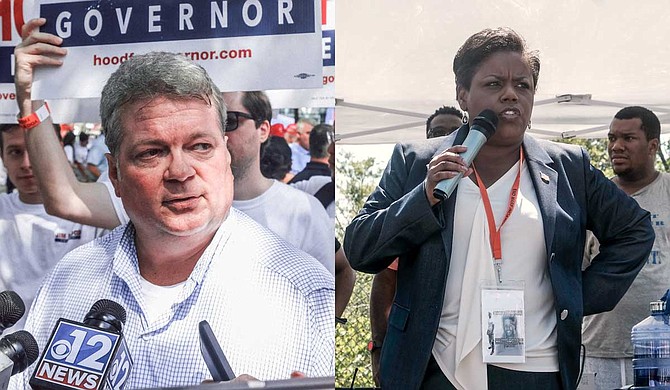 Jennifer Riley Collins (right), the Democratic candidate for Mississippi attorney general, criticized her party's nominee for governor, Jim Hood (left), for his decision not to endorse her or any of his fellow Democrats in the 2019 statewide races. Photo by Ashton Pittman

Jennifer Riley Collins, the woman who hopes to succeed fellow Democrat Jim Hood in the Mississippi Attorney General's office, is accusing him of working to help her Republican opponent. Hood, the Democratic nominee for governor, denies the charge.

"Given my credentials and experience, I wonder why the Democratic nominee for governor and current attorney general appears to be working to get my Republican opponent elected?" Collins wrote in a Facebook post Thursday afternoon.

The Republican nominee for attorney general is current Mississippi Treasurer Lynn Fitch. When the Jackson Free Press asked if it true that the Democratic nominee is helping Fitch, the Hood campaign responded on Friday morning with a one-word statement: "No."

"And they're not endorsing me, either," Collins told the Jackson Free Press in a phone interview minutes later.

Hood has made no endorsements in any other race this year for members of either party.

"As the top of the Democratic ticket, I don't understand how Mr. Hood is saying he is running a bipartisan race and not endorsing any person down ticket," Collins told the Jackson Free Press. "That is problematic for me. I hear repeatedly the same question, 'Why is Jim Hood not supporting you?' And that is both black and white voters across the state of Mississippi. I have been across the state in these last few months, and I have heard that repeatedly. I have heard that more times since the primaries ended."

"I don't know how we win in November if we're a separated party. It's his responsibility as the top of the ticket to unify the party, not mine," Collins told the Jackson Free Press.

In her Facebook post, Collins wrote that it is important for Hood to take a stand on the attorney general's race because "the office of Attorney General touches all facets of our life and community including protecting our seniors and our children from bad actors and protecting the voting and civil rights of all Mississippians."

"Historically, the position has been held by a seasoned and experienced litigator, not a bureaucrat," she wrote. "The position is too important to sit on the sidelines because of pre-existing relationships and a friendship."

"I've spent my entire career protecting and serving. I am a decorated military veteran, an experienced litigator, a civil rights attorney, a legislative advocate and an African American woman," she wrote. "I have the skills and experience necessary to do the job. I am not a career politician. I think it is a question all citizens should ask and something they deserve to know. I urge General Hood to reconsider his lack of support for my campaign. I am running to serve the people not special interest(s)."

If Fitch won, not only would she be the first woman to hold the office, but she would be the first Republican attorney general since George E. Harris left the office in 1878.

The Fitch campaign did not respond to a request for comment.

Voters will choose among candidates for statewide offices, including governor, lieutenant governor and attorney general in the general election on Nov. 5, 2019. Voters must register 30 days before an election to be eligible to vote.