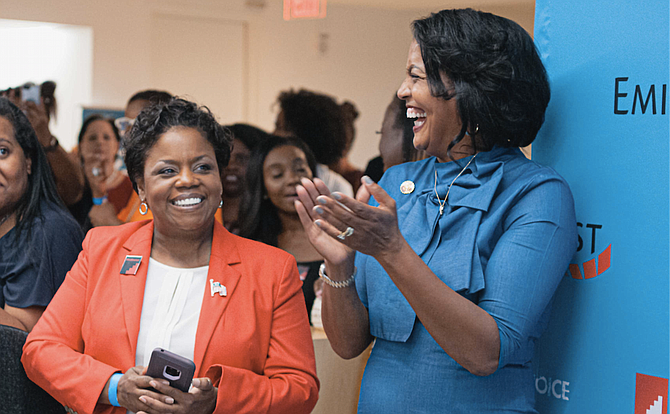 "EMILY's List is proud to stand with civil rights advocate and Army veteran Jennifer Riley Collins to be the next Attorney General of Mississippi," Stephanie Schriock, the organization's president, said in a press release on Tuesday. "With deep ties to the state and a long career serving her country, Jennifer is more than ready to tackle the top challenges facing Mississippi families, including the opioid epidemic, affordable health care, and criminal justice reform."

Mississippi has never elected a woman to the attorney general's office. This year, though, both major parties nominated women, with Republicans nominating current Mississippi Treasurer Lynn Fitch. The GOP nominee, though, is a conservative who opposes abortion rights; EMILY's list endorses women who, among other things, supports abortion rights. Collins was the executive director of the American Civil Liberties Union - Mississippi until stepping down earlier this year to focus on her campaign.

The endorsement comes at a time when current Attorney General Jim Hood, a Democrat, is running for governor on an anti-abortion platform. His office is also defending the State's recent six-week ban on abortion in federal court—a move that has angered some Democratic voters. Hood is also defending the 15-week ban that the Mississippi Legislature passed and Gov. Phil Bryant signed in 2018.

Among other duties, attorneys general are tasked with defending state laws when they are challenged in the courts, but Hood has refused to defend some laws in the past. In 2016, Hood refused to defend Mississippi's anti-LGBT law, House Bill 1523, saying that "continuing this divisive and expensive litigation is not in the best interests of the state of Mississippi or its taxpayer."

"As the attorney general, my job is to represent the legal interests of the State of Mississippi, and to represent all of its citizens. I would work with legislators to ensure that they are looking holistically at the impact of the laws that they would be passing. But once those laws are passed, it is my responsibility as the attorney general to uphold them," she said.

Pushed on whether or not she would defend such laws as Hood is doing now, she said she would have no choice. "Any attorney understands the basic principle of zealously and competently representing your client, and my client would be the citizens of Mississippi," she said.

'Life is a Core Issue for Lynn'

In the GOP race, the Susan B. Anthony List endorsed Fitch, who is currently the state treasurer, in August. The group says it is "dedicated to ending abortion by electing national leaders and advocating for laws that save lives, with a special calling to promote pro-life women leaders."

"We're pleased to support Lynn Fitch in her run for attorney general," SBA List President Marjorie Dannenfelser said in an Aug. 23 press release. "Life is a core issue for Lynn. As a member of the 2016 Republican National Convention platform committee, she played a key role in crafting the party's most pro-life platform ever. Throughout her extensive career in public service, Lynn has been widely recognized for her pro-woman leadership and dedication to Mississippi families. She is committed to upholding Mississippi's pro-life laws and ensuring they are vigorously defended as attorney general."

The 2016 RNC platform that Fitch helped craft took extreme positions on abortion. It called for the addition of a "Human Life Amendment" to the U.S. Constitution that, in practice, would be the same as the proposed Personhood Amendment that Mississippi voters rejected by a 59-to-41 margin in 2011. Like the failed ballot initiative in Mississippi, such an amendment would give fetuses protections starting at the moment of conception.

Opponents of the Mississippi initiative warned that it would ban all abortions—even in cases of rape, incest, severe fetal deformity or in which a pregnancy imperiled a woman's life. They also pointed out that it could have outlawed in-vitro fertilization and certain forms of birth control.

The 2016 RNC platform that the SBA List credits Fitch with helping to craft also reiterated false claims that Planned Parenthood sells fetal parts for profit—claims that had already been discredited by the time Fitch was helping draft the document.

The election for attorney general and other statewide offices in Mississippi, as well as all Mississippi House and Senate seats, is on Nov. 5. Anyone who registered to vote by Oct. 7 is eligible. To cast a ballot, voters must bring a state-accepted form of photo ID.

Voters will also choose new leaders in the races for attorney general, lieutenant governor, treasurer, secretary of state, and other statewide offices on that day. All Mississippi House and Senate races will also be on the ballot.