Analysis: Republicans Show Unity, but Only Some Democrats Do 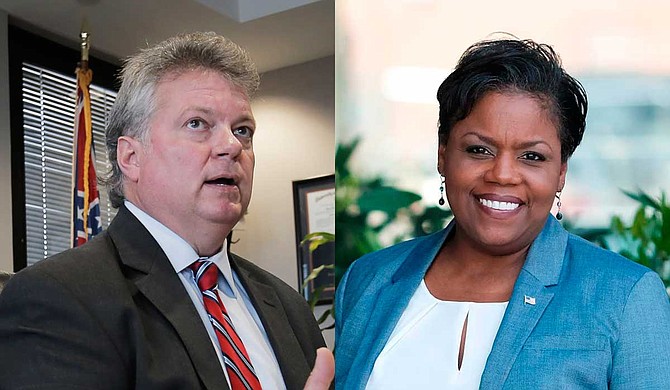 On Oct. 10, Jim Hood (left) debated the Republican gubernatorial nominee, Lt. Gov. Tate Reeves, before an audience in Hattiesburg. One of the moderators, Byron Brown of Jackson's WJTV-TV, noted the Democratic nominee for attorney general, Jennifer Riley Collins (right), has publicly criticized Hood for not supporting her campaign. Photo by Ashton Pittman

JACKSON, Miss. (AP) — Mississippi Republican candidates are at least making noises about supporting each other for statewide offices this year. Most Democrats, however, are not campaigning as a unified ticket.

The tone starts at the top, with Democratic nominee for governor, Attorney General Jim Hood, running his own campaign and pointedly not stumping for the party's other nominees.

On Oct. 10, Hood debated the Republican gubernatorial nominee, Lt. Gov. Tate Reeves, before an audience in Hattiesburg. One of the moderators, Byron Brown of Jackson's WJTV-TV, noted the Democratic nominee for attorney general, Jennifer Riley Collins, has publicly criticized Hood for not supporting her campaign. Brown asked if Hood would endorse Collins.

"When I ran for district attorney in 1995, my dad gave me some good advice," Hood said. "He said, 'Son, you run your race and you stay out of everybody else's.' And I have done that, and that's been good, sage advice for me, and I'm going to continue to do that."

"I run my race because it's going to be hard enough for me to win in this state. And I want to make sure that I represent Republicans and Democrats — because a lot of Republicans are going to vote for me," said Hood, who won four attorney general's races and has been the only Democrat in statewide office the last three terms.

This go-it-alone approach is nothing new. Democrats dominated Mississippi politics for generations, but for some candidates, the party label was more a matter of habit and convenience than a signifier of unity with the national party or even with other Democrats inside the state.

Collins is a military veteran and former executive director of the American Civil Liberties Union of Mississippi. She faces Republican Lynn Fitch, who is the current state treasurer, in the Nov. 5 election.

Collins told The Associated Press on Wednesday that Democratic Party rules require the party's nominees to support each other. She said she is "disappointed" in Hood's decision not to campaign as a ticket.

"I think we are stronger together," Collins said.

"We always lift each other up if the other person is not in the room," Collins said of her agreement with DuPree and Cole.

Hood said at the Hattiesburg debate that he expects to receive votes from some people who supported former Supreme Court Chief Justice Bill Waller Jr. instead of Reeves in the Republican primary runoff for governor.

"I'm going to represent them all — Republicans and Democrats," Hood said. "I've done it as attorney general the whole time. I've represented people without partisanship."

Days after the primary runoffs, Republicans gathered for a unity luncheon at a restaurant in Madison. All the nominees for statewide offices posed for a group photo. Reeves and Fitch, though, have had differences over the years. Fitch succeeded Reeves as state treasurer, and he criticized her handling of the state-sponsored college savings plan.

During the Oct. 10 debate, Reeves jabbed at Hood's answer about endorsements.