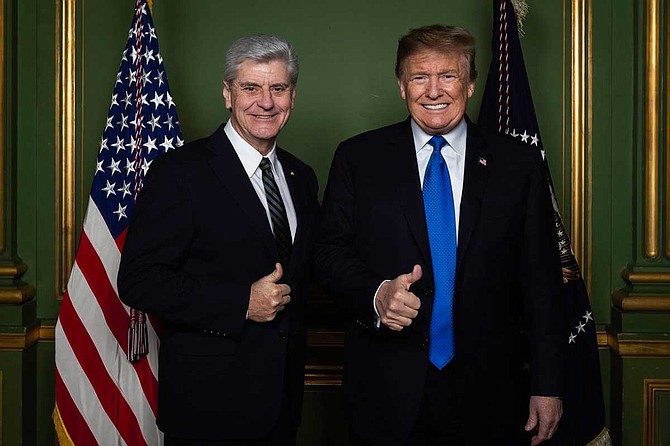 Gov. Phil Bryant poses for a photo with President Donald Trump at a meeting of the National Governors Association on Feb. 22, 2019. Photo courtesy Twitter/@PhilBryantMS

JACKSON — "You're the only president that can do this," Mississippi Gov. Phil Bryant says he privately told President Trump last year, as he urged the fellow Republican to support criminal-justice reform.

Behind the scenes, Bryant says he pushed a reluctant Trump to embrace the First Step Act, a modest law the president eventually agreed to and signed into law in December that eases highly punitive sentences for federal crimes. Trump's son-in-law and senior White House adviser, Jared Kushner, recruited Bryant to coax the president into supporting the bill.

"People did not know that we had a secret weapon in convincing Donald Trump that this was smart policy, and that secret weapon is sitting to my left," Jones said, gesturing leftward at a laughing Bryant.

"Well Mr. President, I'm so excited you're here ... I'm going to turn this over to Phil," Bryant recalled Kushner replying.

"For the next hour, the president was sort of 'No, no, no'" on the idea, Bryant said.

The governor persisted, saying he stroked the president's ego, telling him that his Democratic predecessor could not have passed criminal-justice reform—but Trump could.

"President Obama couldn't have done it, because, quite honestly, a lot of us probably would have screamed and hollered, 'Oh my goodness, he's going to turn them all out on our communities, and there's going to be pillaging and crime,'" Bryant told the crowd. "But when Donald Trump was able to do it along with Mark and his team there at Koch and others, other conservatives, people said, 'Hmm, let me listen to this. Maybe I need to stop shouting and listen a little bit.' And it's just been absolutely remarkable. It was an evolution in the president."

"I would say the criminal-justice system is the biggest failed big-government program," Holden said. "It's a pay-to-play system ... and if you're rich and guilty, you get a better deal than if you're poor and innocent. That's fundamentally unjust."

The Next Step Act eases mandatory-minimum sentences and allows prisoners to get earned-time credits by participating in vocational and rehabilitation programs. Those reforms can help reduce sentences and make it easier for inmates to get jobs upon release. Still, it only affects federal prisoners, who are a minority of prisoners in the U.S. Of the 2.1 million incarcerated people in the country, about 180,000 are federal prisoners.

During the panel, other governors asked Bryant and Wolf for their ideas on implementing criminal-justice reform at the state level.

Between 1983 and 2013, Mississippi's prison population tripled to about 22,400—making it the state with the second-highest incarceration rate nationwide, and sentence lengths increased 28 percent between 2002 and 2012.

That law refocused enforcement of some drug crimes away from the criminal justice system and toward rehab and intervention programs. It also created a uniform definition of "crime of violence" in an effort to reduce the number that non-violent offenders serving sentences akin to those of violent offenders.

"For too long, nonviolent offenders in Mississippi were at risk of serving as much time behind bars or even more time as a violent offender," Southern Poverty Law Center Mississippi's managing attorney, Jody Owens wrote at SPLC.org in 2014. "These reforms provide a uniform definition for "crime of violence" for the first time in Mississippi."

That reform also ended the practice of putting people back in prison for technical parole violations, sending them to detention centers instead.

Convincing legislators to support the law, though, was not easy, Bryant told the audience of governors.

"I had legislator after legislator come into my office, and we had a counseling session, and we had prayer, and they just said, 'Governor, I can't vote for this and go back to Jones County, I'm just going to get killed over it.' And I said, I'm gonna call your sheriff right now, because his jail's full, and he's having to pay for everybody in that jail, and a lot of them made stupid mistakes."

"There are people that need to be in prison. And then there are people we're just mad at," he continued. "They go do something wrong, maybe they're taking drugs and they get trapped in that cycle of addiction and they break into your car, you're mad at them. Do they need to be in jail for 20 years? No."

Between the enactment of that law in 2014 and 2017, the state's imprisonment rate declined 10 percent. Also, the state locked up fewer people for drugs and other non-violent offenses and the number of people post-release supervision dropped 17 percent. The state spent $266 million less on prisons, Pew Trust found. Mississippi still had the third highest imprisonment rate at the start of 2017, though.

The Next Step Act

Now in his last year as governor, Bryant hopes to pass another criminal-justice reform bill in Mississippi. On Feb. 7, the Mississippi House overwhelmingly passed House Bill 1352, which Bryant calls "The Next Step Act." If it becomes law, the state would expand its "drug courts," renamed "intervention courts," to handle cases involving mental illness and military veterans. It would also end the practice of the State revoking driver's licenses for unpaid fines, or suspending them for those convicted of simple drug possession unrelated to the operation of a motor vehicle. It would also allow the expungement of more crimes.

Bryant has vetoed other criminal justice reform efforts, though. Last April, he vetoed a bill that would have authorized drug courts to make medications available to help wean addicts off opioids. The part of the bill Bryant took issue with, though, was that it required the Mississippi Department of Corrections to determine the indigence, or extreme poverty, of Mississippians on parole, probation, or supervision before assessing fees. In his veto message, Bryant claimed it would cost the state millions. In 2017, he also vetoed a bill that would have allowed nonviolent offenders to become eligible for parole after serving 25 percent of their sentence.

In a committee meeting on Jan. 31, the bill's principal author, Rep. Jason White, R-West, admitted the bill does not go as far as it could.

"Though these are meaningful steps, maybe they are baby steps in this reform," White said. "And maybe that's where we need to be."

At the governor's meeting, Bryant highlighted the importance of the bill's licenses provisions.

"We have another bill in front of us now, the Next Step Act in Mississippi, so I can let those coming out get a driver's license," he said. "And professional licenses, so they're not automatically excluded when they walk in to try to get a contractor's license ... They have to have equal opportunity to apply for that license and maintain that license. A lot of them in prison today served in the United States military. So they wore the cloth of the nation. And we're not going to turn our back on them because they made a mistake. That's what I told the president."

Bryant's embrace of the Next Step Act is ironic, considering that federal, state and local law enforcement are working together on a controversial policing approach that Trump's first attorney general, Jeff Sessions, brought back just over a year ago. "Project Eject," which U.S. Attorney Mike Hurst launched in Jackson in December 2017 with the help of the Jackson Police Department and others, is modeled on the old Project Safe Neighborhood model of policing, which experts says is responsible for a lot of the prison-packing that the new Next Step Act is trying to unwind and tends to disparately target African Americans.

The idea of Project Eject is supposed to be to send felons caught with illegal weapons to federal prisons for long sentences far from Mississippi, thus "eject." Recently, Hurst announced expansion of the project, which has coincided with a sharp spike in homicides in Jackson, to Hattiesburg and the Gulf Coast. Although Hurst's office will not release details of arrests and prosecutions under the effort, other than selected press releases, the strategy seems to be targeting crimes beyond gun possession, including gang affiliation and a variety of crimes for expanded sentences.

The Next Step Act's fate now rests in the hands of the Senate where a more ambitious criminal-justice reform bill died on Valentine's Day. Senate Bill 2927, sponsored by Pascagoula Republican Sen. Brice Wiggins—long an advocate for expanded ability to jail gang members—would have reduced the felonies for the first and second drug-possession charges to felonies. It also would have cut into the three-strikes law that mandate longer prison terms for those convicted of three felonies by nullifying it in cases where there are ten or more years between crimes. Upon release, no one could be supervised under parole or probation for more than two years—down from the current five.

'We've Got to Get Folks Back Into the Workforce'

The 2014 act, Bryant said, saved the state $46 million, and that money went to the general fund. With the new bill, though, Bryant wants all money saved to fund re-entry programs.

"Because I've got to get re-entry programs," Bryant said at the meeting. "We've got to get folks back into the workforce. I've got 41,000 job openings in the state of Mississippi. We used to have people looking for jobs, now we've got jobs looking for people."

Getting GED programs in prisons and teaching skills like welding in prison, Bryant said, is an important component of that. He pointed to Ingalls Shipbuilding in Pascagoula. With the Next Step Act, he said, Ingalls can hire inmates who learn welding skills in prison and hire them once they are released.

"When they get out, they've got a job," he said. "So they go get their driver's license. They get certified as a master marine welder and they're making $50,000 a year."

Though Bryant did not specifically point to bills currently in the Legislature that would reform youth detention laws and youth courts to allow for more mental-health treatment, he said he believes youth crime stems from mental health and homelife issues.

"You get 16-year-olds breaking into houses or committing crimes, there's something going on in his life that's really ugly," he said. "My children didn't do that. A lot of children don't do that. Because they have wonderful homes and they have parents who care about them and they get up on Sunday mornings and go to church and those children don't."

The governor said he knows that, at some point, someone will get released as a result of criminal-justice reform who will commit a heinous crime.

"Now there's going to be a mistake. Some knucklehead is going to get out of prison and go commit a violent crime," he said. "It's going to happen. Get ready. And our friends in the media are going to say, 'This is one of the guys that got out because you reformed criminal justice.' Get ready. You have to own it. You have to say, 'Absolutely. And I'm sorry. It's dreadful. It breaks my heart that that happened.

"But look at all the other thousands that are out working, that are taking care of their children. The moms that are back home with their children," Bryant continued. "The moms that are back in their homes with their families. So go to talk to them. But you're going to find that. It's going to happen. Just suck it up and keep moving. Because as I told the president, at the end of the day, it's just the right thing to do."