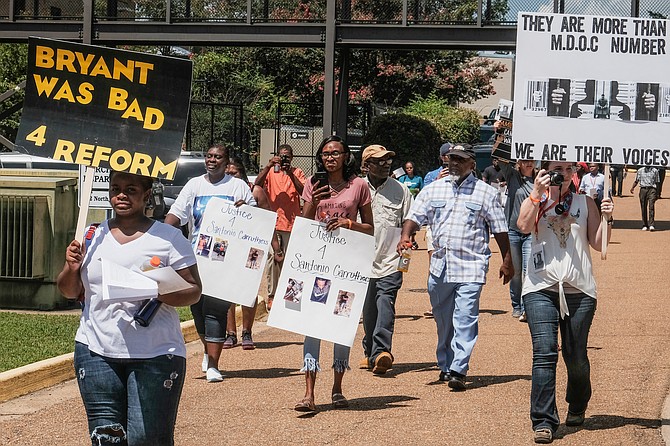 Community members marched to end practices that they say incarcerate far too many people for far too long, often for nonviolent crimes at a rally in Brandon, Miss., on July 29, 2019. Malaika Canada, left, says her son pleaded guilty and accepted a life sentence for a crime she believes he did not commit. Photo by Ashton Pittman

BRANDON, Miss.—Behind the granite back of a high-perched Confederate soldier and a Mississippi state flag, a multi-racial crowd sang freedom songs as mothers held signs, pleading for help for their incarcerated sons.

"I am the mother of Jaylen Barker, and he is in Parchman (the Mississippi State Penitentiary) right now, and I'm fighting for him," said Malaika Canada, who helped organize a Monday rally against mass incarceration in Brandon.

"My son was wrongfully convicted and forced to plead guilty to a crime he did not commit in order to avoid the death penalty," she claimed. "Even though they had no gun-powder residue on my son, and the prints on the gun belonged to someone else, they still convicted him, and they terrorized him and my family. And I am here to fight for him and say enough is enough."

In April, 22-year-old Jaylen Barker pleaded guilty to the November 2016 shooting death of 21-year-old Mississippi State University student Joseph Tillman. Prosecutors claimed Barker and two other suspects stole Tillman's wallet and that Barker shot him to death when Tillman chased them down. Prosecutors had planned to seek the death penalty in a trial, but Barker confessed to killing Tillman in exchange for life in prison.

About 60 people listened as Malaika Canada, who is African American, spoke on Monday. Friends and family members held signs that told similar stories.

As Canada called for reform both to the state's criminal-justice system and its prisons, she described the conditions at the penitentiary where her son lives as "deplorable."

'We Are in a Poor Position'

Jennifer Riley Collins, an African American woman who is the sole Democratic candidate for Mississippi attorney general, spoke at Monday's rally. She recently stepped down as head of the American Civil Liberties Union of Mississippi, where she worked on criminal-justice-reform issues.

If elected, Collins told the crowd she will seek to change things with better training for local district attorneys. "I want to train law enforcement on how they approach our communities, how they deal with implicit biases and how they treat LGBT people," she said. "If you come upon a transgender person, don't have your bias against transgender populations impact how you are policing. That is the only way we all come home safe."

"But I also have family members who are law-enforcement officers, and I want them to come home safe, too," she added.

Velesha P. Williams, a Democrat running for governor of Mississippi, spoke out against mass incarceration at a rally in Brandon, Miss., on July 29, 2019. Members of the Black Panther Party, left, also attended. Photo by Ashton Pittman

Velesha P. Williams, who is running in the Democratic primary for Mississippi governor, also spoke.

"We've got to think of how we treat people of nonviolent crimes. We cannot continue to populate our prisons and spend more in this society on incarcerating an individual than we spend educating an individual," she said. "We've got to do better, and we cannot continue to talk about a war on drugs and not have the same energy for a war on poverty. I stand before you acknowledging the fact that we are in a poor position."

He compared mass incarceration and private prisons to American slavery.

Glasgow is the brother of nationally known civil rights activist and MSNBC host Al Sharpton, who earlier that morning was the target of a Twitter attack from President Donald Trump. Sharpton has a controversial past, including the Tawana Brawley case in New York City.

"He's on there going at it with Trump," Glasgow laughed.

Last year, Trump signed a limited criminal-justice-reform bill, but it does not address the main issues that Glasgow and other activists want to see resolved. Earlier this year, Mississippi Gov. Phil Bryant said he pushed Trump to embrace the First Step Act, a modest law he eventually agreed to and signed into law in December that eases highly punitive sentences for some federal crimes.

On the state level, Bryant signed a criminal-justice-reform bill into law in 2014 that refocused enforcement of some drug crimes away from the criminal-justice system and toward rehab and intervention programs.

It also created a uniform definition of "crime of violence" in an effort to reduce the number that nonviolent offenders serving sentences akin to those of violent offenders. That reform also ended the practice of putting people back in prison for technical parole violations, sending them to detention centers instead.

Earlier this year, Bryant signed "The Next Step Act" in Mississippi, expanding the state's drug courts to handle cases involving mental illness and military veterans. It also ends the practice of the State revoking driver's licenses for unpaid fines, or suspending them for those convicted of simple drug possession unrelated to the operation of a motor vehicle.

Those are good steps, Glasgow said, but Bryant and other Republican governors could do more.

"Is it really cutting it down on incarceration? That's like putting a BAND-AID on a knife cut. There's blood everywhere," Glasgow said. "If Gov. Bryant (and other states' leaders) really wanted to do prison reform, they could do it."

Glasgow said he thinks politicians are using limited criminal-justice reforms to "soften the blows" and "calm down the public and looking like they're doing something."