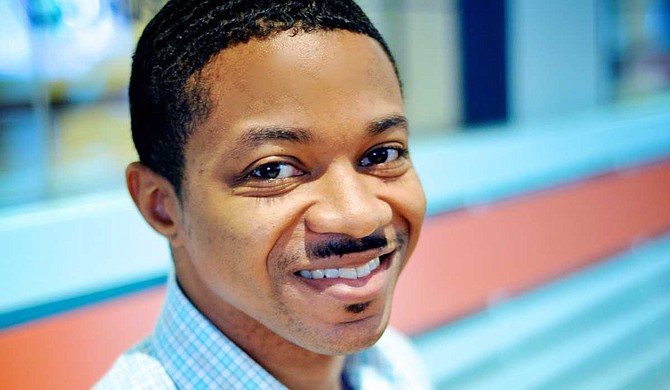 Joshua Quinn runs the BARS Institute, which he started to help young boys of color in Jackson. Photo by Brice Media

Quinn, who is a black man from Jackson, could not make out anything else the boy was saying because he was sobbing uncontrollably.

"I'll call you back," Quinn said, hoping to give the boy time to gather himself. The phone rang again. It was the boy's mother.

"My kids, my kids! Please help my kids," she managed through tears. Like with her son, though, Quinn could not make out much else because she, too, was speaking through sobs.

Quinn did not know what was happening, but he knew he had to get to the children—and fast. He got in his vehicle and started to make his way to the house in Madison where the boy's family lived. On the way, the mother called back. This time, she had calmed down enough to explain what had happened.

"They took my husband," she said. Her husband had dropped her off at the grocery store where she worked overnight and, while she was gone, federal immigration agents had shown up at the house and arrested her husband in front of the boy and his younger sister, who was then 8 years old. She had no way of getting home to them.

When Quinn arrived at the home, he saw the children sitting outside on the porch crying. Nearby, their father's truck sat parked in the same spot he had left it after dropping their mom off at work.

"I got you," Quinn promised the kids, putting his arms around both of them. He did not know what to do in a situation like that—just that he had to find a way to comfort them, somehow.

Quinn shared that story, which happened in 2018, with the Jackson Free Press at a Fondren restaurant on Aug. 8. He did not share their names to protect their privacy. The day before, the federal government had swept six Mississippi towns with the largest one-day series of mass workplace immigration raids in U.S. history, detaining near 700 people, many of them with children attending the first day of school.

The next day, and under intense scrutiny over not notifying schools and Mississippi's Child Protective Services in advance , U.S. Attorney Mike Hurst announced that about 300 people had been released back to their families.

On the night the boy called Quinn last year, the mentor knew the children were going through something that they would not soon get over. Quinn took them back to his house that night. Together, they sat up, talked and cried some more.

Quinn gave them what he called "the talk," explaining that even though they and their mom were American citizens, people would still look at them differently.

"So we had to sit there and have that talk about being black or brown in this country, and they didn't understand that," he said. "From my understanding, their parents shielded them from that. Of course, they were born here, so they are American citizens, but I had to give them that lecture."

Sometimes, Quinn said, other African American friends and acquaintances tell him they do not understand the need to put time and energy into Latino and Hispanic issues. What do family separations have to do with us, they will say. But that is part of black history in America, too, he tells them.

"You had (at times) slave owners or police ripping people away from one another," he said, also pointing to drug war and housing policies.

But Quinn and the children also watched television together for some escape.

The father's arrest has been hard on the family, though, he said. Their parents have pulled apart in the aftermath. The father, whose case is still ongoing, comes in and out, he said.

"They've been so traumatized by it that they chose to be separate," Quinn said.

On that awful night last year, though, Quinn's focus was on just helping the kids get through the same kind of fear and confusion that gripped hundreds across Mississippi earlier this month.

"We watched cartoons and hood movies," Quinn said, laughing. The little girl requested "Pocahontas," and they watched that, too.

When it was all over, though, he knew things would not go back to normal.

"I knew subconsciously, or even consciously, I couldn't take them away from that," he said. "That is a traumatic experience, having your father ripped away from you."