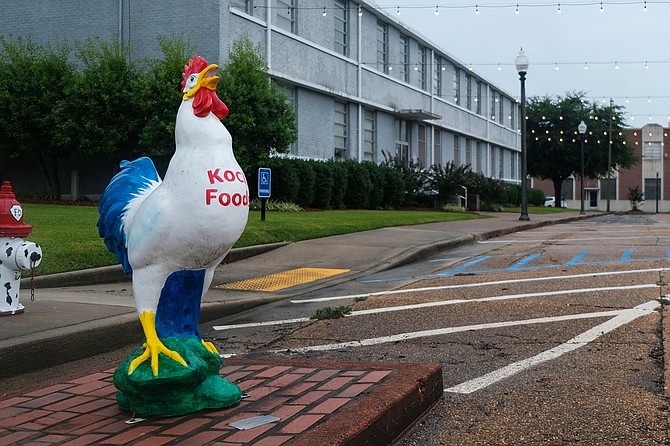 Hispanic and Latino residents of Forest, Miss., have been afraid to go out in public after ICE arrested some members of their community in raids at the Koch Foods plant 10 miles away in Morton. Koch Foods Inc. also operates out of Forest. Photo by Ashton Pittman

In the mid-1980s, Shannon Evans took a job at a rural poultry plant in Mississippi. There, she witnessed a parade of slime-soaked horrors, including amputations. Though she would only remain in the job for one week before calling it quits, the experience left a lasting impression and helped solidify her decision to finish her college degree and leave Mississippi, in addition to convincing her not to eat chicken again for years.

To this day, she will only eat organic farm-raised chicken.

"It was dirty. It smelled foul, pardon the pun. ... It was just beyond disgusting," Evans, a 57-year-old Columbus, Miss., native who now lives in Washington state, told the Jackson Free Press on Aug. 13.

Memories of the week she spent helping process chickens for food were fresh on her mind, though, after federal immigration raids in Mississippi in early August. U.S. Immigration and Customs Enforcement agents, in coordination with U.S. Attorney Mike Hurst in Jackson, arrested nearly 700 poultry workers suspected of being undocumented immigrants in raids ICE carried out at seven different plants across six Mississippi towns on Aug. 7.

The raids left some plants struggling to operate, without enough employees to run at normal capacity. For decades, the plants have relied on bringing in immigrant workers to do the work. Evans said she doubts the plants will be able to hire and retain enough U.S. workers.

"It's a shit job, and everybody knows it," she said. When she was at the plant in Northeast Mississippi, the employees were expected to process between 35 and 45 chickens per minute.

One woman accidentally chopped off the tips of her index and middle fingers while trying to keep up with the furious chicken-chopping pace, Evans said.

"They pretty much fired her right there because of the workplace injury. But it was right after they told her to speed up, and that she was going too slow," Evans said.

"She knew those knives were sharp. She knew better," Evans recalled the boss saying. She said the industry recruited her when she was a college student at the University of Mississippi.

In the aftermath of the raids last month, Koch Foods Inc. held a job fair at the WIN Job Center in Forest, Miss., just 10 miles from where ICE raided a Koch plant in Morton. The Mississippi Department of Employment Security confirmed to the Jackson Free Press that 87 people showed up for the first day of the job fair on Aug. 13.

On the second day, 20 more people applied, MDES Director of Communications Dianne Bell wrote in an Aug. 16 statement to the JFP. She cited "weather-related conditions" and internet being down as the cause of the low total on Tuesday.

Still, it is not easy for poultry plants to retain working U.S. residents, University of North Carolina Chapel Hill Anthropologist Angela Stuesse said on Aug. 12. She has studied the history and work culture of American poultry plants, and spent time in Mississippi's poultry plants in the 2000s.

"It's degrading, difficult work," Stuesse said in an interview. "I think the folks who stay in the chicken plants are the people who don't have other options and certainly, mostly undocumented immigrants fall into that category, but not only."

She has written about the history of chicken plants in America in her book, "Scratching Out a Living." In the past, the plants turned to African Americans to provide poultry plant labor.

"African American workers fought to get access to chicken plant labor because it was seen as a step up from the work in the fields they had been doing for 100 years prior, and they got access to the chicken plants in the late '60s and early '70s and started organizing for better wages and working conditions," Stuesse said.

"I think one of the reasons that the industry started looking further afield was that those workers began to gain traction in terms of organizing and establishing unions."

In the 1990s, Stuesse said, poultry producer B.C. Rogers set its sights on a new target for low-cost employment: Hispanic and Latino immigrants. The company sought to lure new immigrant workers by placing ads in Miami, Fla., and, later, in Western towns and cities like El Paso, Texas. The ads promoted poultry-plant work as an opportunity for a better life and Morton, Miss., as a haven for families, drawing 5,000 immigrants native to Mexico, Cuba, and Central American countries like Guatemala and El Salvador.

"(The ads) extolled the benefits of living in a small town, that it was safe, that your children wouldn't get in trouble..., that people didn't drink there," Stuesse said. "That it was a good place to raise a family. That convinced a lot of people, especially people with children, to try their hand at poultry processing."

The effort, dubbed the "Hispanic Project," proved successful for B.C. Rogers, and immigrants from Miami began arriving in Morton on packed buses in droves, with more than 50 new workers arriving in town each week. The company even set up housing for the workers in hundreds of small homes and trailers it owned. The employer would deduct from workers' paychecks to take them on weekend trips to Jackson, where they could shop or go to church.

In the '90s, the project brought 5,000 Hispanic workers to the small town alone.

"That went on for four years, and it was deemed such an incredible model that other poultry operations in the area followed suit and, according to the architect of the Hispanic Project, he had poultry operations across the South asking him how he did it and trying to replicate that success," Stuesse said.

Over the course of a decade, Morton's Hispanic population increased 10-fold as a result—and all of this happened, she noted, after Congress passed and President Ronald Reagan signed an immigration-reform law in 1986 that made it illegal for employers to hire undocumented workers. In the 2000s, B.C. Rogers went bankrupt, and Koch Foods bought its Morton plant, which was among those ICE raided in August. But the poultry-processing industry took note of the Hispanic Project's success, and other companies began replicating it, Stuesse said.

"The criminalization of work is not the answer. It doesn't stem the flow of undocumented labor," she said.

While the complexion of workers has largely changed since Evans worked in a Mississippi poultry plant in the 1980s, many of the conditions have not. Employees in some plants report no ample bathroom breaks, Stuesse said, echoing one of Evans' complaints. In some cases, immigrant employees are given even fewer opportunities to use restrooms than white or African American employees, she said.

Alicia Richards, who said she worked in a poultry plant in southeast Mississippi 20 years ago, said she recalls the "backbreaking, disgusting, unpleasant" work. Like Evans, she said she did not eat chicken for years afterward. It was "freezing" in the plant, she said, adding that she remembered "wearing sweatshirts in July while shopping (after work) because it took hours to thaw out and warm up."

The plants are indeed cold, Stuesse said, citing a worker from a poultry plant in Carthage, one of the 2019 raid towns, who told her that some employees would "literally scrounge around the plant" for pieces of broken-down boxes "to wrap around (their) torsos or around our legs so that we can stay warm."

Now, though, hundreds of workers and families whom capitalism whisked into small Mississippi towns like Carthage, Sebastopol, Canton and Morton face an uncertain future.

The day after the raids, ICE released about 300 parents whose children had no other guardian ,though ABC News reported on at least one instance in which a pair of siblings spent eight days alone.

Hundreds of other immigrants remain in an ICE processing facility in Louisiana. In Canton, Miss., the father of three children, one as young as two, told Democratic presidential candidate Beto O'Rourke in mid-August that his wife was still being held at the ICE detention center, with no idea when she might be released.

In many cases, mothers and fathers worked at the same plant, but on alternating shifts so one could stay home to care for the children. That has left many families with no job, with the plants firing their remaining undocumented workers or the employees simply afraid to return. Churches and school districts, like the Scott County School District, have stepped up to help them afford rent, bills, food and other necessities.

In the weeks after the raids, owners of Latino grocery stores in Forest saw business fall dramatically, as new residents saved up the money they had and feared going out in public.

"Hispanic people are scared to go out," Tienda Latino owner Ovidio Miguel told this reporter in a story for The Guardian the weekend after the raids. "They're afraid ICE is still around. I'm worried about my business. It's so slow. People came out. Now no one is coming out."

'Until Their Backs Give Out'

Eventually, Stuesse predicts, Mississippi's poultry plants will begin hiring undocumented immigrants once more. They can always claim, she said, that they did not "knowingly" hire undocumented people, and point to non-discrimination laws as having prevented them from rigorously checking new employees' citizenship status—just as Koch Foods did in a statement after the raids.

Immigrant workers, she said, can obtain documents that help them pass the federal E-Verify system that employers use to check citizenship status. When she was in Mississippi, she said, third-party contractors would help migrants obtain the necessary documents. In other states that other researchers examined, she said, some employers would provide the documents themselves. She pointed specifically to University of Colorado anthropologist Sarah B. Horton’s book and research on California farm workers. Horton wrote, "They Leave Their Kidneys in the Fields: Illness, Injury, and Illegality among U.S. Farmworkers."

"As long as there is global inequality, people are going to migrate in search of better opportunities," Stuesse said. "And as long as capitalism is responsible only to the owners of the capital, then employers are going to do (and) corporations are going to do whatever they need to make sure their bottom line is as strong as possible and that they're producing a profit for their owners or their shareholders."

In a statement after the raids, Koch Foods claimed it did not knowingly hire undocumented workers, and that it is working with federal authorities to "ensure only authorized workers may return to work." The company has not returned a request for comment for this story.

While the plants find it more difficult to hire native-born U.S. workers, Stuesse said, documented American families are caught in the cycle of the industry, too.

"Across the rural South, there are generations of African American workers who have been in these plants, and they work until their bodies give out," Stuesse said. "I met lots of African American workers who were disabled because of the work they had done in the poultry plant since they were young, and now their kids were working there. One worker said to me, 'The chicken plants use you up, and then they reach back for your kids.' They saw it as this generational disposability of worker's bodies.

"I think there will always be some U.S.-born folks who don't have other options and end up in the chicken plants."