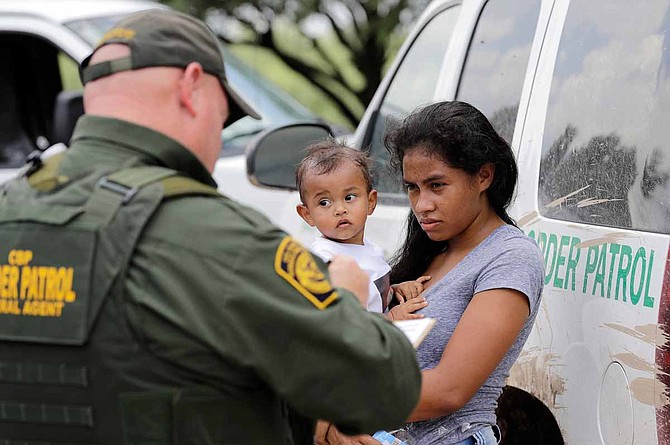 JACKSON — Rep. Bennie Thompson, D-Miss., took aim at the Trump administration on Wednesday after the second child this month died on Christmas Day while in the custody of U.S. Border Patrol agents.

"While the Department of Homeland Security is scrambling to adhere to the Trump Administration's unilateral, radical changes to our immigration system, another young child has died in our government's care," Thompson, who is the ranking member of the Committee on Homeland Security, said in a statement.

Eight-year-old Felipe Gomez Alonzo's Dec. 25 death came a week after Border Patrol agents apprehended him and his father for entering the country illegally just miles away from an El Paso border crossing on Dec. 18. They were seeking asylum after fleeing their home country of Guatemala.

Agents said they gave the child warm food, juice, snacks and water, the Washington Post reported. In the week leading up to Felipe's death, however, agents repeatedly moved the father and son from one cell to another—sometimes late at night.

On Christmas Eve, after six days in custody, agents took Felipe to a hospital with 103-degree fever, where doctors diagnosed him with a "common cold," gave him antibiotics and ibuprofen, and released him back to Customs and Border Protection.

The next day, the boy lost consciousness while vomiting on the way back to the hospital, where he died Christmas afternoon.

Experts told CNN Thursday that "this child's death could have been prevented," pointing out that the U.S. Customs and Border Protection's statement on his death described him as having "flu-like symptoms." A separate, more detailed account of his death and efforts at treatment the agency did not mention a flu test.

"We're right in the middle of flu season, and when a patient has respiratory symptoms and fever, we need to think of flu first," Flor Munoz, an associate professor at Baylor College of Medicine in Houston, said.

On Dec. 8, another child, 7-year-old Jakelin Caal, died at an El Paso hospital of shock and dehydration while in CBP custody. Her death, though, came just 27 hours after agents detained her and her father at a border crossing.

They were on a bus when her father first noticed symptoms and alerted agents, but she had already stopped breathing and had to be revived when she finally got medical care 90 minutes later.

Her funeral in her home village of San Antonio Secortez in Guatemala, held on Christmas Day, drew a crowd of mourners. Her father, though, remained in the custody of CBP agents in the U.S., and her reports described her mother as "too distraught" to attend.

Though six adults died in CBP custody in 2018, Felipe and Jakelin were the first children to die in custody in more than a decade.

In recent months, the administration began turning asylum seekers away from ports of entry and telling them to wait. Just miles from the El Paso port of entry, where agents apprehended Felipe and his father, hundreds of refugees have been waiting for months in Ciudad Juarez.

In his statement, Thompson placed the blame for the deaths on Trump's policies.

"It's clear that the Trump administration's fly-by-night mass detention policies and changes to the asylum process are not working," the 2nd District congressman said. "The welfare of our children in our care must be a top priority. Next year, under a House Democratic Majority, Congress will look for real solutions to these problems, which have been made worse by this administration's choices."

The government is expanding health screenings for children in CBP custody in response to the deaths, and on Wednesday, incoming Democratic House Majority Leader Steny Hoyer vowed to investigate when Democrats take control of the U.S. House next month.

Also in January, Thompson will take over as chair of the Committee on Homeland Security, where he will gain significant leverage to check Trump's immigration agenda with oversight powers Democrats lacked in the GOP-controlled Congress of Trump's first two years.

Currently a ranking member, Thompson previously chaired the committee when Democrats last held Congress from 2007 to 2011.

On Dec. 14, Homeland Security Sec. Kristjen Nielsen blamed Jakelin's father for her death. "This family chose to cross illegally," she said on Fox and Friends.