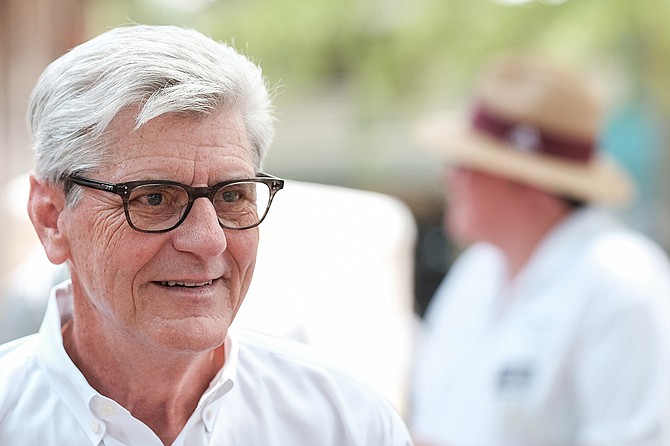 JACKSON—Mississippi Gov. Phil Bryant cheered on President Trump’s threats to shut down the border between the U.S. and Mexico, even though such a move would threaten $2.5 billion in trade with his state’s third largest export market.

“We will be forced to close the Southern Border entirely if the Obstructionist Democrats do not give us the money to finish the Wall & also change the ridiculous immigration laws that our Country is saddled with,” Trump tweeted Friday morning.

“Shut it down, Mr. President,” the Republican governor tweeted in response that afternoon. “The MAGA Nation will stand with you.”

Millions of U.S., Mississippi Jobs Could Be Lost

A 2014 study from the Woodrow Wilson International Center for Scholars estimated that 40,800 Mississippi jobs and 5 million nationwide depend on trade with Mexico.

In 2017, Mississippi imported $1.6 billion in trade with Mexico, with most of that coming from purchases of motor-vehicle parts, electrical equipment, chemical goods and medical equipment. Mexico bought $961 million in Mississippi goods, with most of its purchases coming from chemicals, iron and steel, petroleum and coal products, electrical components, and paper-mill products.

In total, Mexico accounted for nearly 9 percent of Mississippi’s imports in 2017.

The Wilson Center study noted the importance of trade with Mexico to the auto industry. Auto-production plants in Mississippi include a Nissan plant and a Toyota plant.

“Without the availability of nearby Mexican plants to do the final assembly of light vehicles, it is quite possible that the vast U.S. parts-producing network for these vehicles would migrate to someplace outside of the continent,” the Wilson Center study reads.

Mississippi’s dependence on foreign trade has increased dramatically in recent decades, as the share of Mississippi jobs tied directly to such trade grew from 8.6 percent in 1992 to 21.8 percent in 2013, an analysis by Business Roundtable—which supports free trade agreements—found.

Bryant’s office did not immediately respond to a request for comment Monday afternoon.

Governor Backs Trump, No Matter What

While shuttering the U.S.-Mexico border would harm Mississippi economically, Bryant’s urging Trump to do so is part of a pattern of Bryant’s relentless backing of this president since he won the White House. Bryant has tweeted the phrase “Thank you, Mr. President” seven times since Trump became president, even though he never tweeted it before 2017 despite being on Twitter since 2010.

On Friday evening, Bryant tweeted about the death of Cpl. Ronil Singh, a California police officer who was shot Wednesday allegedly by Gustavo Arriaga, an undocumented immigrant who he had pulled over for drunk driving.

“We should all mourn the senseless death of Cpl. Singh. We cannot allow violence to be imported,” Bryant tweeted.

Before Bryant’s tweet, Trump tweeted about the killing Thursday, attempting to use it to rally support for his wall and to paint all undocumented immigrants in the U.S. with Arriaga’s crime.

Four recent studies, though, found that illegal immigration does not drive up crime. A 2015 study by the libertarian Cato Institute found that arrest and criminal-conviction rates for murder, sexual assault and larceny were lower among undocumented immigrants in Texas than among native-born Americans in the state. A 2018 study in U.K. journal Migration Letters also found lower rates of crime among undocumented youth in the U.S. than by U.S.-born youth.

‘Pro-Life’ on Abortion, Not Lives of Migrant Children

Even as Bryant echoes Trump’s rhetoric on immigration and border policy, the self-described “pro-life” governor as not commented on the deaths of two children in the custody of border agents or allegations of abuse at child-detention facilities. He, however, said in October that black women choosing abortions were participating in the “the genocide of 20 million African American children.”

Felipe and his father crossed into the U.S. in a bid to escape poverty in their homeland and for educational opportunities.

“Jakelin and her father came to the United States seeking something that thousands have been seeking for years: An escape from the dangerous situation in their home country,” a statement from her family reads. “This was their right under U.S. and international law.”

A mother traveling from Honduras with her child told Buzzfeed News and NBC News that, after CBP agents detained her and her sick 5-month-old baby earlier this month, they took away the antibiotics she had been using to treat the child. For five days, they put her and the baby in a “freezing cell” known as a hielera or icebox, she said, and refused her requests for treatment for the child, calling her an “invader.”

“The agents told me I wasn’t in a position to be asking for anything and that they didn’t tell me to come to the United States,” she told NBC News.

Oversight of Border Patrol Coming This Week from Thompson

"It's clear that the Trump administration's fly-by-night mass-detention policies and changes to the asylum process are not working," the 2nd District congressman said. "The welfare of our children in our care must be a top priority. Next year, under a House Democratic Majority, Congress will look for real solutions to these problems, which have been made worse by this administration's choices."

Currently a ranking member on the committee, Thompson previously chaired the it when Democrats last held Congress from 2007 to 2011.

Ashton Pittman is the state reporter for the Jackson Free Press. Follow him on Twitter @ashtonpittman. Email him story tips to [email protected]