Rep. Palazzo: Caged Kids Getting ‘Best Treatment of Their Lives,’ Despite Deaths 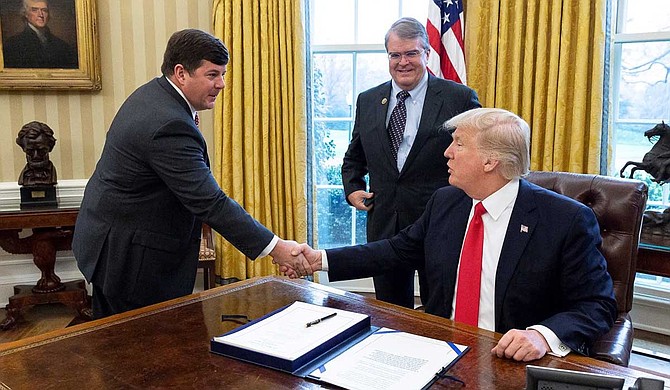 Thousands of immigrant children held in government-run facilities are “receiving the best treatment of their lives,” Mississippi Congressman Steven Palazzo told constituents in a telephone town hall on Sept. 27. Contrary to the 4th Congressional District Republican’s claim, though, at least seven migrant and refugee children have died in U.S. custody since last December.

When 7-year-old Guatemalan child Jakelin Caal died of shock and dehydration while in Customs and Border Patrol custody on Dec. 8, 2018, she was the first child to die in U.S. immigration custody in a decade.

As President Trump’s anti-immigrant crackdown heated up, and immigration agents began separating undocumented children from their parents and holding them in detention, the deaths began to mount, with a second death by the end of the year.

During Palazzo’s Sept. 27 town hall, he said it was wrong to call the facilities “cages.”

“It’s not like they’re in dog kennels,” he told a caller who asked if he supports Trump’s immigration policies.

Photos, videos and reports from the facilities, though, tell stories of children kept inside chain-link pens. Last year, the BBC reported that migrants were calling one facility in Ursula, Texas “La Perrera,” meaning dog kennel in Spanish. In a June 2018 report, the Associated Press described the conditions at a McAllen, Texas. detention center.

“Inside an old warehouse in South Texas, hundreds of children wait in a series of cages created by metal fencing,” the report reads. “One cage had 20 children inside. Scattered about are bottles of water, bags of chips and large foil sheets intended to serve as blankets.”

Congressman Bennie Thompson, a Democrat who represents Mississippi’s 2nd Congressional District and serves as the chairman of the Congressional Committee on Homeland Security, called immigration officials to testify before his committee earlier this year. When Thompson used the word “cages” in March hearing, though, U.S. Homeland Security Secretary Kirstjen Nielsen took exception.

“Sir, we don’t use cages for children. Sir, they’re not cages,” she said, with the Washington Post reporting that she used her hands to make a small box, suggesting only something smaller could be considered a cage.

When Thompson asked her what the holding pens are, she described them as “areas of the border facility that are carved out for the safety and protection of those who remain there while they’re being processed.”

"I am really, really concerned with these children,” she said. “We have private entities that are holding them in concentration camps—and that is exactly what they are being held in.”

That same month, the American Medical Association wrote to U.S. Secretary of Homeland Security Kevin K. McAleenan and U.S. Customs and Border Protection Acting Commissioner Mark A. Morgan to express concerns about conditions at the facilities where the government is holding children and adults.

“Conditions in CBP facilities, which include open toilets, constant light exposure, insufficient food and water, extreme temperatures, and forcing pregnant women and children to sleep on cement floors, are traumatizing,” the AMA wrote. “Such facilities are not appropriate places for children or for pregnant women.”

But in the Sept. 27 tele-townhall, Palazzo dismissed concerns about the health of the children, saying that Immigration and Custom Enforcement agents should not have to play babysitter and do things like drive sick children to hospitals and clinics for medical care.

In May, a 16-year-old Guatemalan boy died alone next to a toilet after spending six days at a government facility for unaccompanied migrant minors. Though he had been running a 103-degree fever the day before and tested positive for the flu, agents never took him to a hospital, and instead transferred him to a Border Patrol station in Waterloo, Texas. A video of his cell shows him vomiting on the floor before his death some time after 2 a.m., though agents did not find his body until about 6 a.m. An autopsy found that his death resulted from a combination of flu, sepsis and pneumonia.

His was the fourth flu-related influenza death of an immigrant child in U.S. custody since Christmas Day 2018, when 8-year-old Felipe Gomez Alonzo died in a New Mexico hospital from influenza B and a bacterial infection. Despite those deaths, the Trump administration has refused to offer vaccines to children and adult migrants in ICE custody as flu season ratchets up, even as its plans to collect DNA on all of them for a national crime database emerged this week.

On Sept. 12, three Democratic members of Congress who are also doctors—U.S. Reps. Kim Schrier of Washington, Ami Bera of California, and Raul Ruiz of California—wrote to the U.S. Department of Homeland Security and the Centers for Disease Control and Prevention to share what they called “deep concerns about recent reports that migrant families will not be receiving flu vaccines this Fall,” calling the policy “shortsighted and dangerous.”

“Vulnerable populations, like children, the elderly and those who are chronically ill, are more susceptible to complications from the flu. And for a respiratory infection like influence, risk increases when people are in close quarters. That’s why administering flu vaccines for people in contained areas is the gold standard to prevent complications and save lives.”

“We have all visited the border facilities in Texas,” the letter continues. “One of our main takeaways as doctors and policymakers was that the overcrowded conditions are ripe for a public health emergency. As the flu season begins, the threat of an outbreak is heightened, putting our greater communities at risk, including Customs and Border Patrol (CBP) agents at border facilities. Physicians in McAllen, Texas reported seeing numerous flu cases in community clinics well into the summer, months after flu season traditionally ends.”

Earlier this year, ICE made deals with private-prison corporation CoreCivic to begin using their facilities in Adams and Tallahatchie County to house hundreds of detained undocumented adult immigrants and refugees. Then, in early August, the Trump administration launched a mass immigration raid in Mississippi that swept up hundreds of allegedly undocumented immigrant workers in at poultry plants across the state.

Palazzo praised the raids. “As liberals who hold the attention of the media advocate for decriminalized illegal immigration, I will continue fighting against attempts to weaken our already flawed immigration system,” he said in an Aug. 13 press statement. “If someone seeks citizenship in the United States there is a process in place that allows them to apply legally.”

He did not mention that Trump has cracked down on even legal means of entry for refugees and immigrants, shutting down legal ports of entry and severely cutting back on the number of refugees the country will admit.

During the Sept. 27 town hall, Palazzo defended Trump, who is facing impeachment following revelations that he repeatedly urged Ukraine President Volodymyr Zelensky in a July 25 phone call to investigate former Vice President Joe Biden, one of his possible 2020 opponents, in order to hurt him politically.

Thompson is the only Democrat in Mississippi’s congressional delegation—and the only member who supports impeachment.

"We must protect our constitution and the United States of America's national security. The president has abused his power, obstructed justice, and violated his oath of office,” Thompson said in a statement shortly after U.S. House Speaker Nancy Pelosi announced the start of the impeachment inquiry on Sept. 24. “Moreover, the president of the United States should not put his political interests over our national security. No one is above the law. Therefore, he must be impeached and subsequently removed from office."