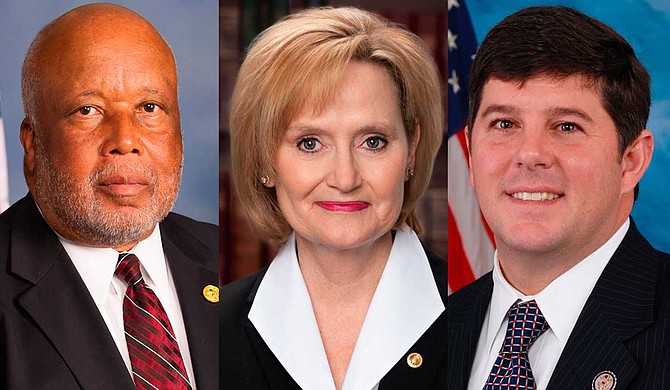 After months of resisting calls for impeachment, including from Mississippi Congressman Bennie Thompson, U.S. Speaker of the House Nancy Pelosi announced the start of a formal inquiry against President Donald J. Trump on Tuesday. The impeachment inquiry comes after revelations that Trump repeatedly urged Ukraine President Volodymyr Zelensky in a July 25 phone call to investigate former Vice President Joe Biden, one of the president's possible 2020 opponents, in order to hurt him politically.

"I support @SpeakerPelosi. Impeach Trump!" Thompson tweeted moments after the announcement. The Democrat is chairman of the House Homeland Security Committee.

A whistleblower memo suggests Trump may have threatened to withhold $391 million in U.S. military aid to Ukraine unless Zelensky agreed to launch a probe into unsubstantiated allegations against Biden and his son, Hunter Biden.

"The actions of the Trump presidency revealed dishonorable facts of the president's betrayal of his oath of office, betrayal of our national security and betrayal of the integrity of our elections. Therefore, today, I am announcing the House of Representatives is moving forward with an official impeachment inquiry," Pelosi said Tuesday afternoon.

Hours after Pelosi's announcement, Thompson expounded on his views.

Thompson: 'We Have No Other Alternative' Than Impeachment

"The president's conversation with the Ukranian officials was against the law. He requested that they investigate a United States citizen in an effort to help him steal another election," Thompson said. "Additionally, the administration blocked the Inspector General from disclosing the whistleblower complaint. As a nation, we have no other alternative.

"We must protect our constitution and the United States of America's national security. The president has abused his power, obstructed justice, and violated his oath of office. Moreover, the president of the United States should not put his political interests over our national security. No one is above the law. Therefore, he must be impeached and subsequently removed from office."

Thompson is Mississippi's only Democrat in Congress. The state's Republican representatives leapt to the defense of Trump, with U.S. Sen. Cindy Hyde-Smith avoiding the Ukraine issue altogether in a statement Wednesday morning.

"I'm disappointed, but not surprised, House Democrats have decided to undertake a divisive impeachment inquiry," Hyde-Smith said. "It's hard to overlook the fact that calls to remove President Trump started the minute he won the election, and the grasping at straws hasn't ever stopped."

Former U.S. Secretary of Agriculture Mike Espy, who challenged Hyde-Smith for her seat in 2018, wrote in a tweet that he supports the inquiry.

"I support @SpeakerPelosi's efforts to create a Joint Committee to investigate President Trump's conversations and actions with the Ukrainian president. The American people deserve to know if Trump tried to pressure a foreign power to undermine our democracy."

Espy, who won 46% of the vote in 2018, has already begun laying the groundwork for a rematch against Hyde-Smith when her seat is up again in 2020.

Republican Congressman Steven Palazzo, who represents areas of South Mississippi including Hattiesburg and Biloxi, also avoided discussing the Ukraine issue, instead calling it "the lowest political attack I've witnessed since coming to Congress."

"I fully believe President Trump has nothing to hide and that this investigation is a continuation of the liberal witch hunt against him. This is a sad day for our country," he wrote.

On Tuesday, the White House released a semi-transcript of Trump's phone call with Zelensky, which showed that Trump not only pressed Zelensky to investigate Biden, but that he told him his personal lawyer, Rudy Giuliani, and U.S. Attorney General William Barr would be in contact. Barr drew fire in March after releasing a summary of the Mueller report prior to its release that turned out to be false.

Thompson first revealed his support for impeaching Trump in May, after the Mueller Report's release.

In the report, Mueller said he could not charge Trump in the Russia probe because, under Justice Department guidelines, a sitting president cannot be indicted. That responsibility, he said, is with Congress, per the longstanding opinion from the department's Office of Legal Counsel.

In Mueller's 448-page report, he identified 10 different instances in which he found evidence that Trump may have obstructed justice by trying to impede the investigation. Mueller said he could not "establish" whether Trump conspired with the Russian government to try to hurt Hillary Clinton's election chances, but added that it did not mean there was no evidence. He cited instances in which subjects of the investigation and witnesses had deleted records, including text messages.

In the notes from Trump's call with Zelensky, which happened the day after Mueller testified before Congress, the Ukranian president told Trump Ukraine would like to "buy more javelins (anti-tank missiles) from the United States for defense purposes."

"I would like you to do us a favor though because our country has been through a lot and Ukraine knows a lot about it. I would like to have the attorney general call you or your people and I would like you to get to the bottom of it," Trump replied. "As you saw yesterday, that whole nonsense ended with a very poor performance by a man named Robert Mueller, an incompetent performance, but they say a lot of it started with Ukraine. Whatever you do, it's very important that you do it if that's possible."

Just days before that July 25 call, Trump told his acting chief of staff, Mick Mulvaney, to delay the military aid to Ukraine. Trump released the aid on Sept. 11 after the U.S. House began investigating the whistleblower's complaint.

Mississippi Lt. Gov. Tate Reeves, who is the Republican nominee for governor, also ignored the concerns over Ukraine in a tweet Tuesday morning, instead calling the Democratic Party "out of control and truly dangerous." On Monday, he praised Trump for "leading on religious freedom at the national level." Reeves has been a staunch supporter of the president, even attacking former GOP primary opponent Bill Waller for not talking about Trump enough.

In April, U.S. House Rep. Justin Amash of Michigan became the only Republican member of Congress to call for Trump's impeachment. He said he did so after carefully reading the Mueller Report. He switched his party status to independent shortly afterward. No other Republican member of Congress has voiced support for impeachment since, but U.S. Sen. Mitt Romney of Utah did say on Wednesday that he finds the latest revelations "troubling."

The oldest education organization in the state endorsed Mississippi Attorney General Jim Hood, a Democrat, in the race for governor on Tuesday. In a press release, the Mississippi Association of Educators on Tuesday said the decision came following a "rigorous, non-partisan process" in which candidates submitted a questionnaire and sat for an interview with the group's PAC, the MAE Fund for Children & Public Education.

"Our public school students and educators have been asked to do more with less for far too long," MAE President Erica Jones said in a press release Tuesday. "Public education in Mississippi is suffering the long-term effects of shamefully low teacher salaries, under-resourced classrooms, and underfunded teacher supply funds. We are facing the most profound teacher shortage crisis in our state's history. Unless we elect leadership committed to reversing these trends, our struggles to recruit and retain educators and to provide the kinds of opportunities our students deserve will continue.

"It's time for those who have been given ample time to prove that public education means more to them than election year pandering to make way for candidates who will prioritize Mississippi's educators and the 90% of Mississippi children who attend public schools," Jones continued. "In the race to become Mississippi's next governor, that candidate is Attorney General Jim Hood."

Last week at a public school in Greenville, Miss., Hood announced his plans for education. He said he wants to expand the state's pre-K programs, give teachers a significant pay boost, and fully fund education in accordance with the MAEP formula.

Earlier this year, Reeves blocked a $4,000 teacher pay raise, arguing that the State did not have enough money for more than a $1,500 raise. Days later, he helped sneak through $3 million in public funds to expand the State's voucher program to pay tuition costs to send kids to private schools.

The entire 5th U.S. Circuit Court of Appeals will hear an appeal in the case of Mississippi Senate District 22. Earlier this year, a federal judge in Jackson ruled that the district amounted to an unconstitutional gerrymander because it diluted black voting power. After the State appealed that ruling, a three-judge panel on the 5th Circuit affirmed that ruling. If the entire court decides to overturn the ruling, though, that could upend the current November election for that seat, requiring a 2020 special election.

The Legislature already approved a new map after the initial ruling earlier this year. Senate District 22, which stretches 100 miles across six counties, is majority African American but has a white Republican senator, Buck Clarke of Hollandale. The new map raised the black voting-age population in Clarke's District to 58 percent, up from 51 percent.

But during federal court arguments at the U.S. District Court for the Southern District of Mississippi in February, Maxwell Palmer, a political scientist at Boston University, testified that District 22 would need a 62-percent black voting-age population in order for African Americans to have a "realistic opportunity" to elect their candidate of choice.

Most of District 22 is in the Delta, which is majority black and one of the poorest regions in the country. Before the 2010 Census, it also included majority-black areas of Madison County. But legislative redistricting in 2012 extended it into wealthy, majority-white parts of Madison County, too.

That created a district comprised of white voters who are significantly wealthier than the average white Mississippian, and black voters who are significantly poorer than the average black Mississippian. Statewide, about 13 percent of white Mississippians live below the federal poverty line, but among white residents of Senate District 22, fewer than 9 percent do. While 32 percent of African Americans live in poverty statewide, that number climbs to 41 percent in Clarke's district.

In a tweet on Tuesday, Mississippi Gov. Phil Bryant, one of the Republicans arguing that the lawsuit should be overturned, praised the decision for the entire court to hear the appeal.

"Under our system of Federalism, the Mississippi Legislature not a single Federal Judge has the Constitutional authority to apportion districts," Bryant wrote.

Though the Democratic-appointed justices voted to uphold Reeves' ruling, Clement did not. In a dissent, Clement wrote that Thomas is "a black Democrat" who is "trying hard to get his seat back." She also accused Reeves of writing a ruling that is "narrowly tailored to win Thomas the election."

Clement made the partisan nature of her dissent clear, writing that Mississippi would have won on appeal at the Fifth Circuit if it had not "had the poor luck of drawing a majority-minority panel." Presumably, she was referring to the fact that Democratic-appointees are a minority on the Fifth Circuit.

"I have never seen a judge, federal or state, write an opinion as overtly partisan as hers," Rep. David Baria, the Democratic House Minority Leader, told the Jackson Free Press after her comments in March.

Voters will choose among candidates for statewide offices, including governor, lieutenant governor and attorney general in the general election on Nov. 5, 2019. Voters must register 30 days before an election to be eligible to vote. The deadline is Oct. 7. In person voter registration applications must be postmarked by Oct. 7 or in-person forms turned in by 5:00 p.m. that day.