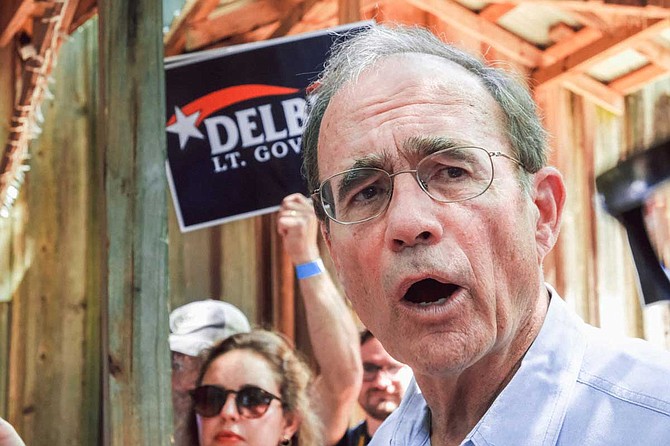 Mississippi Secretary of State Delbert Hosemann, a Republican, pitched his case for voters to make him lieutenant governor at the Neshoba County Fair on July 31, 2019. Photo by Ashton Pittman

PHILADELPHIA, Miss.—Just over a decade ago, Mississippi House Rep. Jay Hughes' mother died in the back of an ambulance while en route to a hospital that was just a little too far away.

"I don't need to ask the (Mississippi) Hospital Association the value of rural having hospitals in every single community," Hughes told the crowd after sharing that story at the Neshoba County Fair on Wednesday.

He was pitching his candidacy as the lone Democrat in this year's race for lieutenant governor.

"I've got a lifetime of one thing—and that's being real," he said.

He told the mostly white crowd that he supports "Mississippi Cares," a plan the Mississippi Hospital Association unveiled in June. It would use federal dollars to expand access to Medicaid to about 300,000 uninsured Mississippians, and could be the key to helping keep the state's struggling rural hospitals afloat.

In Mississippi, lieutenant governors are powerful, with executive and legislative roles. They serve as the president of the Senate, which gives them significant leverage in choosing the committee chairs who decide which legislation to prioritize—or kill.

Hughes' likely Republican opponent in November, current Mississippi Secretary of State Delbert Hosemann, spoke immediately after him. He told the crowd that he, too, wants to "reform Medicaid." He said he was studying models in different states, and promised a plan that would save rural hospitals.

"No Mississippian should be further than 30 minutes from an emergency room, and they won't be starting next year," Hosemann pledged, though he did not offer specifics.

Current Lt. Gov. Tate Reeves, who is running for the Republican nomination for governor, seemed to respond to Hosemann and Hughes' comments on Medicaid expansion in a statement on social media Wednesday evening. He called it "Obamacare expansion," and lumped it in with national Democrats' universal health-care proposals.

"I won't let them wrap Mississippi up in their scheme," wrote Reeves, who has opposed expansion for years.

During a May press conference, the Mississippi Hospital Association unveiled a proposal called "Mississippi Cares" that, like Medicaid expansion, would insure around 300,000 more adults in the state, ages 19-64 who earn up to 138% of the federal poverty level.

The 300,000 who could gain coverage live in households where they make too much money for traditional Medicaid, but not enough for subsidized private insurance under former President Barack Obama's signature 2010 law, the Affordable Care Act. It included funds for states to fill the gap with Medicaid expansion, but Mississippi's Republican leadership has refused to accept more than $1 billion for expansion each year since 2013, even though it would fund 90% of the cost of Medicaid expansion in Mississippi.

Under the MHA proposal, patients would help fund the remainder with $20 a month in premium payments, as well as a $100 fee for non-emergency use of a hospital emergency room.

Reeves is facing significant GOP primary challenges from Mississippi Rep. Robert Foster and former Mississippi Supreme Court Chief Justice Bill Waller Jr., all three of whom are speaking at the fair Thursday. If Reeves wins the race for governor, he could use his veto power to block a potential Lt. Gov. Hughes or Hosemann from expanding Medicaid. Waller and Foster have both embraced Medicaid expansion, as has the leading Democrat for governor, current Attorney General Jim Hood.

Pre-K for All, Teacher Pay and Living Wage

At the Philadelphia political speeches on Wednesday, Hughes and Hosemann's differences on other issues were often more about emphasis than substance.

Hughes' signature issue is public education. He said teachers need a pay raise and "respect" from their legislators. Mississippi teachers are some of the lowest paid in the nation, and make thousands less than teachers in neighboring states.

With Mississippi currently in the middle of a teacher shortage crisis, Hosemann said he also wants to raise teacher pay and work to attract teachers to "critical areas," like the Delta, where many untrained educators are working on emergency licenses. He said he wants to incentivize retired teachers to come back to work.

"Why are we ignoring them? They should come back. We need their expertise," he said.

Both candidates said they want to cut down on "burdensome" and "unnecessary" testing requirements. Hughes ended his speech with his signature line.

"It all starts with education—and that means public education," he said.

Hosemann said he also wants to implement a universal pre-K program, so that every child in Mississippi can begin an education starting at age four. Later in life, he said, Mississippians should have opportunities that do not require a four-year college degree. To accomplish that, he wants to expand career and technical education and provide more opportunities for high school students to begin working toward a degree at a community college early.

"Every Mississippian deserves the opportunity to have a living wage and have a future in Mississippi," Hosemann said.

'The Backbone of the Economy'

As secretary of state, Hosemann said he has worked with small businesses that have emphasized the need for an educated workforce. He also wants to make sure those businesses have the same advantages as large corporations, he said.

"They're the backbone of the economy," Hosemann said. "Small businesses deserve the same incentives as those offered to multi-billion dollar corporations, and they'll get them."

In 2016, Reeves and other Republican leaders in the Legislature pushed through a set of tax cuts that include $260 million in cuts for out-of-state corporate franchises every year.

During his speech, Hughes drew once again from his personal life to explain his support for infrastructure. Hundreds of roads and bridges around the state remained closed due to a lack of infrastructure funding for repairs.

"My experience is that my mom was a truck driver, I was a truck driver, and I've been on roads in all 82 counties in the last year," he said. "I understand that those are the lifelines of every community, and they're in horrible shape. So I didn't have to ask the manufacturer's association about the value of roads and bridges."

Hughes told the crowd he was a church-going, gun-owning everyman who had served in the military, worked as a substitute teacher and donated his legislative salary back to his local school districts. He portrayed Hosemann as an out-of-touch, longtime "career politician."

"It's likely going to come down to Mr. Hosemann and me, and he's a good man," the Democrat said. "But we have different experiences. He was born with a silver spoon in his mouth, and I was born with a plastic spoon in mine."

Hosemann later drew jeers from Hughes' supporters, though, when he dismissed Hughes as an ineffective "liberal."

"I don't just talk about getting things done. I do them. (It's) beyond me how someone can serve four years in the Legislature and have so little influence," Hosemann said.

Hughes told the crowd that he is a Democrat who opposes abortion, a position that has tainted his support among some women in the state.

"(I'm) pro-life, but pro-entire life. Which means addressing infant mortality and the health of the mother, early childhood education and good-paying jobs," he said.

Children under age 2 in Mississippi die at higher rates than in almost all other states. Mississippi's maternal mortality rate is also high. In both cases, African Americans are hit hardest.

Earlier this year, Hughes voted for Mississippi's fetal heartbeat law, which requires doctors to check for a heartbeat before an abortion procedure and bans it once one becomes detectable. That usually happens around six weeks, which is sooner than most women know they are pregnant.

Hughes was one of just a handful of Democrats, all men, who voted for the bill, which Gov. Phil Bryant signed. It includes no exceptions for rape, incest or severe fetal deformities. Only one Republican, House Rep. Mississippi McGee of Hattiesburg, voted against it.

During his speech, Hosemann mentioned an endorsement from the anti-abortion Right to Life organization, the NRA and several other conservative groups. When the Jackson Free Press asked him later if he supports the heartbeat law considering its lack of exceptions, he did not have an answer.

After this story published, Hosemann's campaign sent a statement to the Jackson Free Press clarifying his position.

"I unequivocally support the Heartbeat Bill and have always supported pro-life legislation," the statement reads. 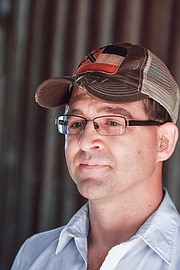 Shane Quick is a Republican candidate for lieutenant governor who highlights his support for the Mississippi flag. Photo by Ashton Pittman

On Aug. 6, Hosemann faces just one challenger in the GOP primary. Shane Quick highlighted the fact that he is not a politician and does not have the funding to run political ads as a positive.

He wore a baseball cap featuring the Mississippi flag, which includes the Confederate emblem in its canton. Dozens of fairgoers, including small children, carried small replicas of the flag as they participated in the festivities.

Voters will choose party nominees in the race for lieutenant governor on Aug. 6. Anyone who registered by July 8 is eligible to vote, and people can vote in either the Democratic or Republican Party primary. If no candidate in any of those races wins 50% or more among primary voters, the top two vote-getters go head-to-head in an Aug. 27 runoff.

Democratic and Republican candidates in other races face off that day, too, including candidates in the races for governor, attorney general, treasurer, Mississippi House and Senate seats and more. Those races could also go to a runoff on Aug. 27. After voters decide, nominees from both parties will face off in the general election on Nov. 5.