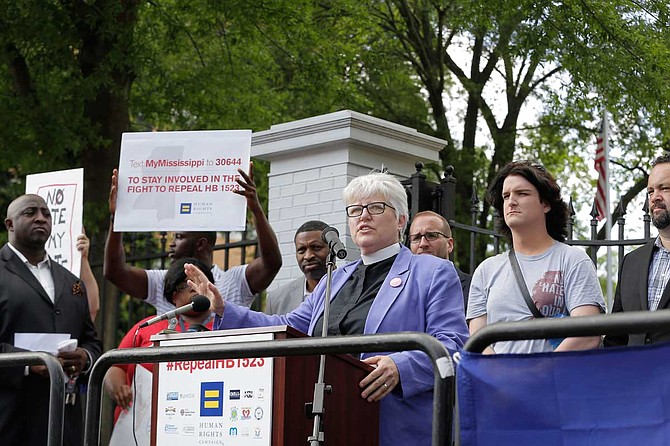 Susan Hrostowski, an episcopal priest who took part in a 2015 lawsuit that successfully ended Mississippi's ban on adoptions for same-sex couples, said Rep. Mark Baker’s views on same-sex adoption “are not shared by other Christians who follow the teachings and ministry of Jesus.” Photo by Imani Khayyam.

If Mississippians make state Rep. Mark Baker their next attorney general, he vows to fight so that religiously affiliated adoption agencies that accept state funds can continue to legally discriminate against LGBT families.

"Bowing to legal pressure from the leftist special interests like the (American Civil Liberties Union), other states have already begun to strip away provisions which protect a conservative group's religious beliefs and practices," the Brandon Republican said in the April 8 press release.

Under current law, religiously affiliated adoption agencies in Mississippi that accept taxpayer funds can turn away LGBT families or even refuse to place LGBT children. The same is true in eight other states, including Alabama, Kansas, North Dakota, Oklahoma, South Carolina, South Dakota, Texas and Virginia.

Michigan also allowed discrimination in taxpayer-funded adoption agencies until last month, when the state's attorney general reached a settlement with the ACLU, agreeing that adoption agencies in that state could no longer refuse to allow same-sex couples or LGBT people to adopt while taking state money.

"So, any group hostile toward Christian organizations which favor traditional marriages and families can now force religious groups to adhere to the left-wing agenda or get out of the arena," Baker said in Monday's statement.

The Michigan lawsuit, Baker claimed, was "a way to enable left-wing groups to force their secular, anti-religious beliefs upon all of society."

Susan Hrostowski, who is the vicar at St. Elizabeth's Episcopal Church in Collins, Miss., and lives in Hattiesburg with her wife, disagrees.

"The beliefs Mr. Baker espouses are not shared by other Christians who follow the teachings and ministry of Jesus," she told the Jackson Free Press on Friday. "Jesus taught us to love and not judge. The religious beliefs of one sector of society should not be forced upon others through the government. The Bill of Rights and the First Amendment to the Constitution protects us from that."

'An Act of Religious Supremacy'

In 2015, Hrostowski, who is a social-work professor at the University of Southern Mississippi, joined a lawsuit to overturn Mississippi's now-defunct law that banned LGBT people from adopting. She and her wife, Kathryn Garner, shared a son named Hudson, but only Garner had legal parental rights. They had married earlier that year after the Supreme Court struck down state bans on same-sex marriage nationwide earlier, and wanted to make Hrostowski's adoption official. The lawsuit prevailed, with the courts striking down the state's blanket adoption ban.

In 2016, Hrostowski also joined a lawsuit against HB1523, which allows businesses to refuse to serve transgender people and same-sex couples seeking wedding services. That lawsuit, which was initially struck down by a federal judge in Jackson, failed on appeal at the Fifth Circuit Court of Appeals in New Orleans.

Another Christian minister who disagrees with Baker is Brandiilyne Magnum-Dear, the pastor of Joshua Generation Metropolitan Community Church in Hattiesburg.

"I am sickened by the idea that keeping children from loving homes is the Godly thing to do," she said. "I cannot imagine that Jesus would refuse to allow any child a home and family regardless of what that looks like. I am angry that Mark Baker exalts his moral values above that of same-sex couples, or anyone else's that differs from him. Do not be fooled—this is not an attempt to protect faith or religious beliefs from any 'agenda.' This is an act of religious supremacy in an attempt to oppress and control in the name of God."

In his April 8 statement, Baker promised that he would not "conspire" with the ACLU—a civil liberties organization that has long drawn the ire of conservative Republicans.

'Conspiring With the ACLU'

"We're seeing liberal attorney generals around the country use lawsuits to legislate without a vote," Baker concluded. "We need an attorney general who'll focus on protecting basic constitutional rights, like religious freedom, free speech and free association rather than conspiring with the ACLU. Faith-based, pro-family organizations are under attack, and as attorney general, I will unapologetically defend them and our values."

If Baker succeeds in his quest for the GOP nominate for attorney general, he will face off with Mississippi ACLU Executive Director Jennifer Riley-Collins.

Last month, the Jackson Free Press asked her how she would respond if she became attorney general and had to defend a Mississippi law, like HB1523, that legalized discrimination against LGBT people.

"As the attorney general, my job is to represent the legal interests of the state of Mississippi, and to represent all of its citizens," she said. "I would work with the legislators to ensure that they are looking holistically at the impact of the laws that they would be passing. But once those laws are passed, it is my responsibility as the attorney general to uphold them."

Riley-Collins is the lone Democrat running to replace incumbent Attorney General Jim Hood. Hood is running for the Democratic nomination for governor.