When a Priest Files a Lawsuit Against HB 1523 | Jackson Free Press | Jackson, MS

When a Priest Files a Lawsuit Against HB 1523 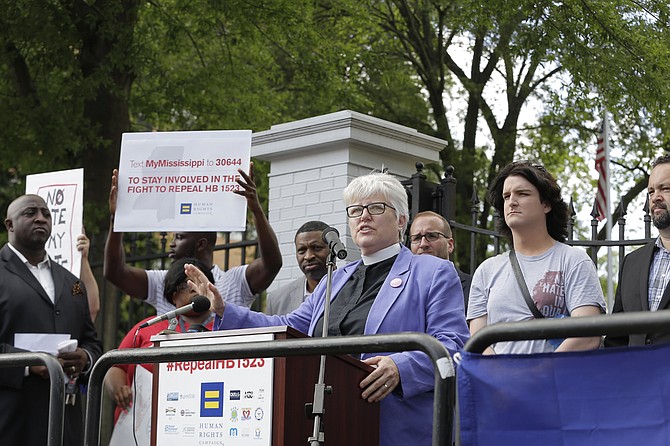 Rev. Susan Hrostowski, an episcopal priest and an associate professor at the University of Southern Mississippi, is a plaintiff in the third lawsuit and fourth legal challenge to House Bill 1523. Photo by Imani Khayyam.

JACKSON — Rev. Susan Hrostowski is familiar with fighting for her and her family's rights, even if that means going to court. She was one of the plaintiffs in the case that struck down Mississippi's ban on same-sex adoption on March 31. Less than a week later, Gov. Phil Bryant signed the "Protecting Freedom of Conscience from Government Discrimination Act" into law. 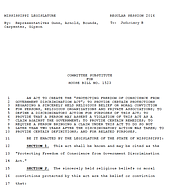 Hrostowski was a part of the adoption lawsuit so that she could legally do a second-parent adoption and become a legal guardian of her son, but after that victory, Bryant signed House Bill 1523.

"It's a very strange feeling when your own government legislates against you," Hrostowski told the Jackson Free Press.

She said the bill brought into question everything and everyone except those people she already knew.

Beyond that, as an Episcopal priest, Hrostowski said she found it completely outrageous that the bill passed in the name of religion. "To me and most Episcopalians and many Methodists, the word of Jesus is superior to all other scripture, and Jesus said, 'Love one another as I have loved you,'" she said.

The Campaign for Southern Equality and Hrostowski filed a lawsuit against several state officials, saying that House Bill 1523 is unconstitutional, late last week.

The lawsuit states that House Bill 1523 violates the First and 14th Amendments of the U.S. Constitution and asks the U.S. District Court to enjoin the bill from becoming law on July 1. New York-based attorney Roberta Kaplan, who won same-sex couples the right to marry and adopt in this state, will represent the plaintiffs.

"The reason for my part in the lawsuit is the Legislature and the governor are holding up this arch-conservative, fundamentalist Christian idea as superior to any other religious perspective," Hrostowski said. "And secondly it is extremely clear if you listen to the Senate debate before their vote, this law pertains to a specific population, and that's unconstitutional."

The lawsuit names the governor, attorney general, the executive director of Mississippi Department of Human Services, and the state registrar for vital records as defendants. The initial complaint includes several floor-debate comments from the 2016 legislative session about the bill, and draws the distinction between Mississippi's Religious Freedom Restoration Act and The Protecting Freedom of Conscience from Government Discrimination Act.

"Critically, the Mississippi RFRA does not single out any particular religious belief or creed and privilege it above all others ..." the complaint says. "HB 1523, however, starkly departs from this tradition and practice by providing additional rights and benefits and by extending well beyond those available under RFRA, but only to individuals or entities that espouse one of three specific beliefs: (a) that '[m]arriage is or should be recognized as union of one man and one woman,' (b) that '[s]exual relations are properly reserved to' a marriage between one man and one woman, or (c) male and female 'refer to an individual's immutable biological sex as objectively determined by anatomy and genetics at the time of birth.'"

The ACLU and the Mississippi Center for Justice have both filed lawsuits, asking the courts to rule House Bill 1523 unconstitutional, and Kaplan filed a motion to re-open the case that legalized same-sex marriage in Mississippi, due to HB 1523's passage. U.S. District Judge Carlton Reeves will hold a hearing on Kaplan's motion on Monday. The Campaign for Southern Equality's lawsuit is the third lawsuit filed against House Bill 1523 and the fourth legal challenge.

Hrostowski, who lives in Hattiesburg with her family, is the priest at St. Elizabeth's Episcopal Church in Collins, but she also teaches social work at the University of Southern Miss. Hrostowski said LGBT rights have come a long way—quicker than she thought—but the LGBT community in Mississippi still lacks basic civil rights.

"We've made fantastic gains, but because we've made so much progress, now we're paying for it from those who are against our progress," she said. "And we have to keep on fighting—we still don't have basic civil rights."