‘Not No, But Hell No’: Fighting for Same-Sex Adoption | Jackson Free Press | Jackson, MS

‘Not No, But Hell No’: Fighting for Same-Sex Adoption 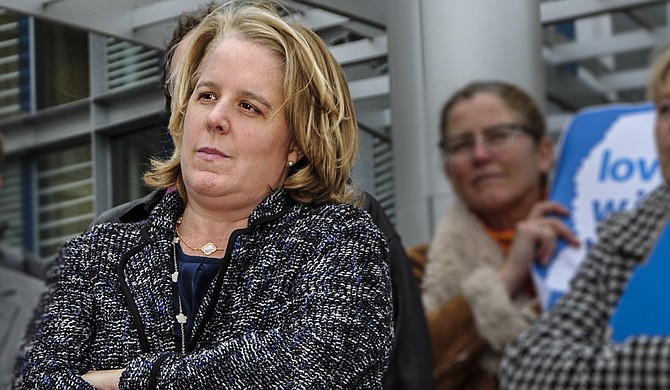 Roberta Kaplan, an attorney from New York City who litigated the U.S. Supreme Court case that struck down the Defense of Marriage Act case in 2013, is representing four Mississippi couples suing the attorney general, governor and MDHS over the state’s ban on same-sex adoption. Trip Burns/File Photo

"We just want to be treated like any other family," Donna Phillips said in her court testimony on Nov. 6 in the southern Mississippi U.S. District Court in Jackson.

Phillips and her wife, Janet Smith, along with three other couples, are suing state Attorney General Jim Hood, the Mississippi Department of Human Services (and its acting director) and Gov. Phil Bryant over Mississippi's same-sex adoption ban in U.S. district court.

The lawsuit is crucial for her family's future, Phillips says. She and Smith have a daughter, Hannah, who only has one birth parent included on her birth certificate: Phillips gave birth to her daughter eight years ago.

Phillips, who served in the U.S. Army and worked for the Mississippi National Guard, feared for Hannah's medical security if she was deployed. Because Smith's name is not on the birth certificate, and she's not her daughter's legal parent, she could be denied rights to authorize treatment or medication for Hannah. Phillips also fears what her estranged parents might try to do.

"If something happened to me, I'm afraid my parents would challenge custody (of Hannah)," Phillips told the court with tears in her eyes.

Adoption, however, would fix this. Phillips and Smith have started the adoption process in Mississippi but hit a roadblock when no private social-work agency would conduct a home study (an inspection of an applicant's home environment sometimes court-ordered for prospective adoptive parents) for fear of retaliation from MDHS for violating the well-known adoption ban in Mississippi. A home study is a common but not mandatory requirement of the court to finalize adoption, done either before or after an application is completed.

Following the Obergefell v. Hodges ruling that legalized same-sex marriage nationally, Phillips consulted with an attorney to see if Smith could finally apply for an adoption and win.

"We were told not no, but hell no," Phillips said.

Several other witnesses took the stand as Roberta Kaplan, the lead counsel from Paul, Weiss, Rifkind, Wharton & Garrison LLP in New York, laid out her clients' case. They aren't looking for damages but relief from the damage that Mississippi's discriminatory ban has caused their families. Judge Daniel P. Jordan III is presiding over the case—and he questioned Kaplan as much as her counsel questioned the witnesses.

Kaplan is asking the court to issue a preliminary injunction that would allow two of the plaintiffs to become adoptive and legal parents to their children. Additionally, Kaplan wants Jordan to force the attorney general to withdraw his opinion, which upheld Mississippi's abortion ban as constitutional and asked for the case to be dismissed, and for MDHS to issue a regulation or policy that allows private social-work groups to conduct home studies for same-sex couples with no fear of repercussions.

Specifically, Kaplan is challenging the provision in Mississippi adoption law that states, "Adoption by couples of the same gender is prohibited." She said the provision is not constitutional under the Equal Protection and Due Process clauses of the U.S. Constitution.

Attorneys for the attorney general's office and MDHS defended Mississippi's adoption ban. They argued that because attorney-general opinions are not binding, asking Hood to withdraw his opinion would not force chancery-court judges around the state to grant adoptions to same-sex couples. They are asking Jordan to dismiss the case, maintaining that plaintiffs can sue their chancery-court judges once they are denied an adoption—and appeal to the Mississippi Supreme Court if necessary.

This case is a way to simplify that process, Kaplan argued, although she did concede that Hood had no authority to tell chancellors what to do.

The governor's role as a defendant rarely surfaced in the hearing, but Kaplan said he was still responsible. "By saying post-Obergefell that the Mississippi adoption ban is OK, he (Gov. Bryant) has told gay couples throughout Mississippi that their marriages are not as good as straight couples," Kaplan told Jordan.

The Campaign for Southern Equality filed the lawsuit in August on behalf of four same-sex couples in Mississippi who wanted to adopt children, or who already had children but with just one official parent instead of two. Mississippi's same-sex couple adoption ban is the only one of its kind in the nation.

The defendants—MDHS, Bryant and Hood—filed a motion to dismiss in September, but in November the court summoned both sides for a hearing.

Kaplan also filed the same-sex marriage lawsuit, Campaign for Southern Equality v. Bryant, on behalf of two couples in Mississippi before the Obergefell ruling legalized same-sex marriage nationally, including in Mississippi. Following that ruling, Kaplan and CSE decided it was the right time to move on Mississippi's adoption ban. Kaplan also litigated the United States v. Windsor case before the U.S. Supreme Court that struck down the Defense of Marriage Act in 2013.

Susan Hrostowski, another plaintiff in the case, testified about how the adoption ban creates inequality for advantages that dual-sex couples likely take for granted. Hrostowski is an Episcopal priest and a social-work professor at the University of Southern Mississippi, and her name is not on her son Hudson's birth certificate.

"If I die, Hudson won't get my Social Security," she told the court. "If I were his parent, he could go to USM half-price."

Hrostowski and her wife, Kathryn Garner, considered an adoption after Obergefell as well, but the couple was told that they had a "one in four" chance of being approved depending on which Forrest County judge got their case.

Dr. Brian Powell, an expert witness in the adoption case, told the court that the gender of parents does not determine anything, but "parenting determines parenting."

Powell is a researcher and professor at Indiana University who focuses his research on several aspects of parenting, particularly how same-sex couples parent. Powell said the bulk of research on LGBT parenting shows that good parenting is not linked explicitly to gender.

"Children who come from same-sex households fare as well as children from dual-sex households," Powell said during his testimony in court.