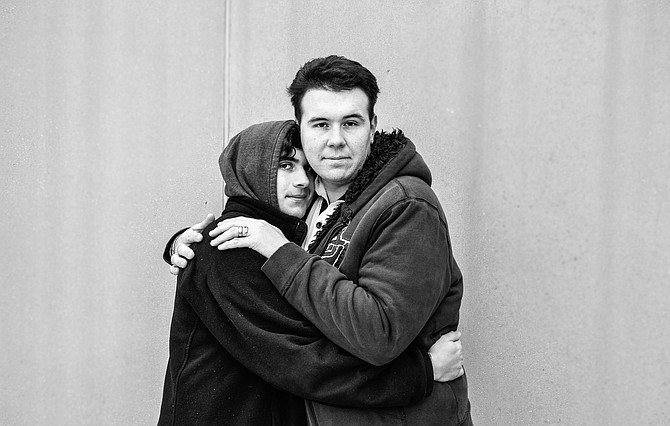 Kaylee Holland and Michael Buckley are from Laurel. They are engaged. Photo by Trip Burns.

While a federal district judge in Mississippi may rule same-sex marriage is a constitutional right as soon as this week, the legalization of same-sex marriage in the state is in the hands of the 5th U.S. Court of Appeals and, ultimately, the U.S. Supreme Court.

Lawyers for the State of Mississippi asked U.S. District Judge Carlton W. Reeves last week to exercise caution when deciding whether to overturn the state's ban on same-sex marriage, but the judge seemed responsive to the plaintiffs' arguments that the ban constitutes discrimination and should be eliminated immediately.

"Doesn't the court have a responsibility not to 'wait and see'?" Reeves asked Assistant Attorney General Justin Matheny after Matheny argued that the state should hold off on changing same-sex marriage laws until rulings are made in other cases or until the Legislature changes the law itself.

No judicial appointee by Democratic Presidents Barack Obama or Bill Clinton has ever upheld a same-sex marriage ban.

Constitutional law expert and Mississippi College School of Law professor Matt Steffey said Reeves is likely to overturn the state's same-sex marriage ban and decline to issue a stay. That means same-sex marriage would be legal immediately in Mississippi until the 5th Circuit issues a stay or reverses the decision, assuming the state appeals Reeves' ruling.

"That period of time may be minutes, hours, days or weeks. Or indefinitely," Steffey said, meaning that the 5th Circuit could issue a stay, putting same-sex marriage on hold, the same day as Reeves' ruling or not at all.

Although Reeves had not ruled in the first formal legal challenge to the state's same-sex marriage ban as of press time, an attorney for the plaintiffs seemed upbeat about Reeves' smart, engaging line of questioning during oral arguments Sept. 12.

Roberta Kaplan, who is representing two Mississippi couples, also argued in the 2013 landmark case United States v. Windsor, in which the Supreme Court ruled the federal Defense of Marriage Act unconstitutional. Kaplan used the Windsor case to show that LGBT people have equal dignity and should not be treated differently under the law.

When asked if the state's same-sex marriage ban was modeled after DOMA, Matheny said, "It would be pretty difficult for me to say not."

Kaplan wants Reeves to enjoin the state's constitutional prohibition against same-sex marriage on behalf of individuals involved in the case, including lesbian couples Andrea Sanders and Rebecca Bickett and Jocelyn Pritchett and Carla Webb as well the Campaign for Southern Equality. If Reeves, whom President Obama appointed in 2010, grants the injunction, gay marriage could become legal and available immediately.

A major topic of discussion during the hearing was the application of various U.S. cases involving the rights of LGBT people and how those precedents could be used. The State of Mississippi, represented by Matheny, a special assistant attorney general, argued that Baker v. Nelson, a 1972 case, is precedent that same-sex marriage bans are constitutional.

In Baker, the Minnesota Supreme Court found that a law prohibiting same-sex marriage did not violate the Constitution.

The U.S. Supreme Court dismissed the case, causing the ruling to stand, never again addressing Baker. While the defense claimed Baker is relevant, Kaplan said it has been superseded by subsequent court cases—especially Windsor.

"Doesn't that speak volumes?" Reeves asked Matheny, referring to the fact that the Supreme Court did not reaffirm the Baker precedent during the Windsor case, which they could have if the case was still relevant, Kaplan argued.

Kaplan argued that LGBT people deserve heightened scrutiny under the Equal Protection Clause of the 14th Amendment, a constitutional protection upon which she based much of her argument.

Kaplan said it would be "hard if not impossible" to find a legitimate reason for denying same-sex couples the right to marry. Instead, the law has the purpose of treating gay people differently than straight people because of a "fear of people who appear to be different," Kaplan said. This discriminatory attitude is one reason Kaplan argued that LGBT people deserve heightened scrutiny.

The only argument the state used to show legitimate state interest was the promotion of "responsible procreation." But Reeves rejected the idea that only people who can procreate should be able to marry. What about the elderly, the infertile or couples who simply don't want to have children? Reeves asked.

Matheny said that is an issue of under-inclusiveness of the law and does not necessarily delegitimize it. Kaplan said there is no connection between promoting stable families and making same-sex marriage illegal.

Showing an understanding that they could be unsuccessful in their case, Mississippi's attorneys asked Reeves for a stay, which would suspend the case and postpone a ruling from taking effect and immediately legalizing same-sex marriage. State attorney Paul Barnes argued the stay is necessary because all the circuit clerks in the state "would have to be prepared to issue licenses" to same-sex couples wishing to marry.

Reeves probed the defense, asking "what's the difference" in the administrative tasks between marrying a same-sex couple as opposed to a different-sex couple.

Barnes also argued that the state would suffer when having to recognize all same-sex marriages at once when it comes to the "intricate system" of taxes and adoption procedures.

Near the end, Kaplan said that she wasn't "sure I understand that argument at all," in regard to the injury of the state that would occur if Reeves granted injunctive relief for her plaintiffs. Other states have seen no other changes to their law after legalizing same-sex marriage, she said.

Barnes said that a stay would avoid an "on again off again" situation that would occur if ongoing litigation were to result in the confirmation of same-sex marriage bans—like if a higher court found the ban constitutional.

"The state could decide not to appeal," Reeves offered as a solution, eliciting giggles from the audience. Barnes joked that making that decision would be above his pay grade.

It is likely the state will appeal the decision should Reeves strike down the ban. Reeves' ruling won't have influence on the decision at the 5th Circuit level because that court is supposed to look at legal questions on their face. Steffey said he expects the 5th Circuit to uphold the same-sex marriage bans in Texas, Louisiana and Mississippi, over which it has jurisdiction, because it is one of the most conservative circuits in the country.

While attorneys for Mississippi wished for Reeves to avoid ruling on the lawsuit until the 5th U.S. Circuit Court of Appeals ruled on the same-sex marriage cases before it now, none of them could say whether or not the state would follow the federal appellant court's precedent if it were to find same-sex marriage bans unconstitutional.

This, Kaplan argues, illustrates the animus—an attitude that compels the state to treat gays and lesbians differently under the law—that proves same-sex marriage bans do not serve a legitimate purpose. It is also why Kaplan does not believe the state should receive a stay.

Since then, the 6th U.S. Circuit Court of Appeals upheld the ban, which gives the U.S. Supreme Court a reason to take the case, Steffey said. Legal experts say the Supreme Court is likely to take a same-sex marriage case this court term, which ends in June.

Read an archive of related stories and comment at jfp.ms/lgbt.