Mississippi's Marriage Equality Fight is Over—Or is it? 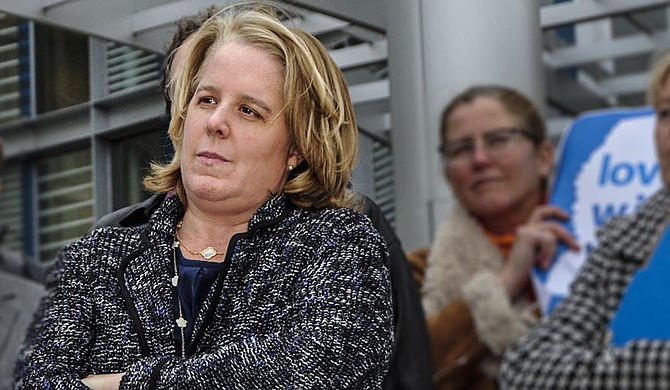 Roberta Kaplan, the lead counsel attorney for the plaintiffs in the Campaign for Southern Equality v. Bryant case, kept it brief after Judge Reeves' ruling was affirmed on Thursday telling the AP, "It's over." Photo courtesy Trip Burns/File Photo

That was the message from Roberta Kaplan, the attorney who represented lesbian couples in a case to strike down Mississippi's same-sex marriage ban, to an Associated Press reporter on Wednesday evening. But Gov. Phil Bryant and other opponents of gay rights are still looking for ways to enforce the "religious freedom" of people opposed to the decision.

On Wednesday, the 5th U.S. Circuit Court of Appeals lifted the stay of a preliminary injunction in the Campaign for Southern Equality v. Bryant case. In 2014, U.S. District Judge Carlton Reeves ruled that Mississippi's constitutional prohibition against marriage between two people of the same sex violated the U.S. Constitution.

Mississippi appealed to the 5th Circuit, which heard oral arguments in three same-sex marriage cases in January; instead of ruling on the cases, the 5th Circuit left the status quo in place because the U.S. Supreme Court was likely to and did rule on the issue this term.

On Wednesday, U.S. Circuit Judge Jerry Smith, writing for the three-judge federal panel in New Orleans, told federal district judges in Louisiana, Mississippi and Texas to issue final rulings, aligning them with the Supreme Court's ruling in the Obergefell v. Hodges case by July 17 at the latest.

The judge wrote in three separate opinions that the U.S. Supreme Court's decision that marriage is a constitutional right equally held by all Americans "is the law of the land and, consequently, the law of this circuit, and should not be taken lightly by actors within jurisdiction of this court."

Mississippi Gov. Phil Bryant said he was cheered by Smith's decision to include language from the Supreme Court opinion saying that people remained free to disagree with same-sex marriage for religious or other reasons.

Already this week, the set-to-retire Grenada County circuit clerk left her post early because she did not want to issue marriage licenses to same-sex couples. The Associated Press reported that Linda Barnette had served as the circuit clerk in Grenada County for 24 years, and was scheduled to retire after the November elections. She decided she couldn't wait, however, because legalizing same-sex marriage goes against her religious beliefs.

Legal scholars say that even with the legality of same-sex marriage being protected, issues are a likely to emerge where marriage rights collide with individual religious rights.

Gov. Bryant hinted at that next battleground in his statement.

"While I still deeply disagree with the decision of five U.S. Supreme Court justices to remove the authority to regulate marriage from states, I am heartened by the 5th Circuit's implication that it recognizes the rights of people of faith as guaranteed by the First Amendment of the United States Constitution," Bryant said in a statement. "As governor, I will my continue efforts to protect the religious liberties of Mississippians."