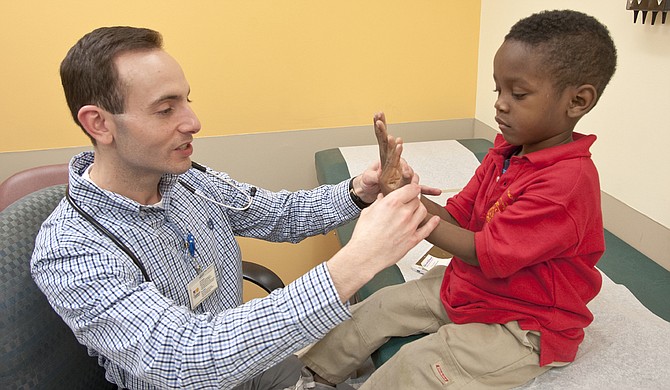 Dr. Omar Abdul-Rahman, a pediatrics professor at the University of Mississippi Medical Center, recognizes that medicine is not one size fits all. That's why he is studying the role that human genetics play in treatment and prevention, particularly for children.

Rahman's life has hardly been cookie cutter, either. His parents grew up in Iraq. His mother, Feryal, graduated from medical school in a time when restrictions in her small town outside Baghdad tried to prevent women from attending school past 9th grade.

"My mom sort of had this very progressive streak in her from the time she was young," Abdul-Rahman says. His mother and her husband, Abdul-Rahman's father, Adil, moved to Jackson in the '60s, where she took an obstetrics and gynecology residency at UMMC. When Abdul-Rahman was 5 years old, the family moved to a diverse community in Saudi Arabia where Abdul-Rahman spent his childhood and teenage years. They returned to Jackson in 1991 after he graduated from high school. He attended Millsaps College in 1996, and then went to UMMC for medical school in 2000.

He finished his pediatric residency in 2003 and spent two years at Stanford University in California for a genetics fellowship. There, he encountered a newborn with birth defects that affected her brain, kidneys and lower extremities. A medical student noticed something wrong with her knees. After searching, they stumbled across genitopatellar syndrome, a disease characterized by genital abnormalities, underdeveloped kneecaps, mental disability and other body abnormalities.

A radiology resident then did an ultrasound on the knee and discovered that the child did not have a kneecap. After other families came forward with patients that fit the same description, Abdul-Rahman began working with a group at Baylor University in Texas to find the gene that caused the condition. But each test failed to find anything. After going back to UMMC 10 years later, Abdul-Rahman treated a baby with the same disease.

As part of his work, Abdul-Rahman does pre-implementation genetic diagnosis, where he works with an in vitro fertilization specialist to test embryos for diseases and implant healthy ones in women's uteri. But without knowing what the problematic gene is, Abdul-Rahman can't ensure a healthy child.

Still, the parents of the baby pressed him for a solution. Abdul-Rahman reached out to other doctors and patients dealing with the disease. He submitted his patient's samples to the California doctors, and they isolated the gene. The family went on to have a second healthy child. "If I didn't hear them ... then we would have missed out on that opportunity," he says.

Abdul-Rahman met his husband, John Lyons, at Millsaps in 1996. The couple dated for 20 years before marrying in Boston in 2013.