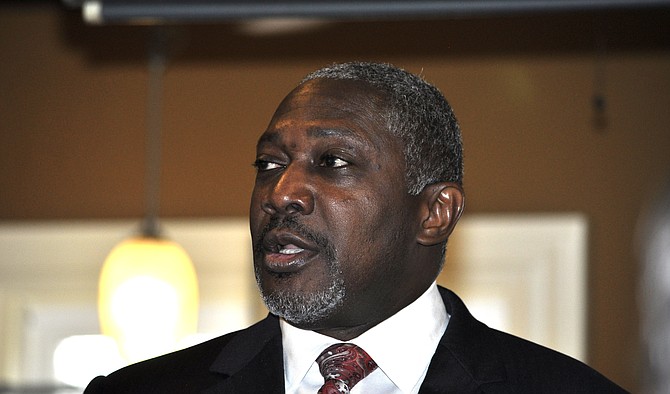 Sen. John Horhn, D-Jackson, is looking for ways to improve the criminal justice system—but the Legislature turned back most of it. Photo by Trip Burns.

"Ride to Harlem, Hollywood, Jackson, Mississippi. If we show up, we gon' show out, smoother than a fresh jar of skippy," Bruno Mars sings in "Uptown Funk."

The Jackson Shout-out in Mark Ronson's No. 1 hit is actually a salute to Ronson's new protege, Keyone Star, according to the agent who negotiated her contract, Fred McAfee.

Ronson, who produced for Amy Winehouse, came to Mississippi to find his muse and instantly knew that Starr, a Jackson native, had what he was looking for, McAfee said. He believes more Mississippians could pursue dreams of artistry while staying home if the state invested in an entertainment industry—which could bring billions to the state.

"Mississippi is just not capitalizing off of its most prevalent natural resource, and that is talent," McAfee said.

McAfee was on a study committee that the Mississippi Legislature created last year to determine the feasibility of creating incentives to facilitate an entertainment industry for the state.

*Now, lawmakers have the opportunity to act on the committee's findings with the Mississippi Entertainment Industry Investment Act, a bill that passed the House and would, McAfee said, "effectively create the music industry."

The act would provide tax credits for record companies and incentivize the growth of public-private partnerships in the music and entertainment industry.

"Normally, without this type of foundation, (an artist) would have a hard time becoming a multi-millionaire. He would have to leave Mississippi, as all of them have to. This gives people the opportunity to stay at home, pay taxes in Mississippi, which is good for everybody, and become the multi-millionaire that they (now) have to go to Atlanta or New York or Tennessee to become," McAfee said.

*Editor's Note: Tuesday, March 3, was the deadline for legislative committees to pass bills originating in the opposite chamber. The Senate Finance Committee did not discuss the Mississippi Entertainment Industry Investment Act, effectively killing it after this story went to press..

Too Hot, Called a Police and a Fireman

While the Legislature allocated funds in the 2014 session for the Capital City Crime Prevention Study that began Feb. 16, the death of a number of Jackson-related bills calls the Legislature's dedication to its capital city into question.

Under the 2014 bill, the attorney general's office must task a research team with analyzing the processing of criminal cases in Hinds County and how officials allocate court resources. It's also looking at the efficiency of zero-tolerance discipline policies and the effect that school resource officers have on student performance. The state expects the team's report in July.

But the $500,000 that the state appropriated to the attorney general's office—which chose the BOTEC Analysis Corporation of Los Angeles to conduct the research—only covers the cost of the study. And the study was only one part of a larger plan that Sen. John Horhn, D-Jackson, created to tackle criminal justice issues in the capital city.

Horhn's plan, under Senate Bill 2806, included funding of a multi-jurisdiction task force; special prosecutors and judges in Hinds County; a reentry program for ex-offenders; a summer youth program; and solutions to jail overcrowding.

Still, Horhn is glad that the Legislature met at least part of his request.

"While I'm disappointed it's not as comprehensive as we anticipated, I'm happy at least that we're looking at where the critical issues are in the criminal justice system so that we can start coming up with remedies for that," Horhn said.

Horhn said that not all of the half-million dollars appropriated to the project will be spent on the study, which may create the opportunity to do some follow-up work.

Rep. Adrienne Wooten, D-Jackson, authored a bill this year to appropriate $5 million to the City of Jackson for the purpose of employing additional police officers and for vehicles.

The bill, like most aimed at helping Jackson, died in the committee.

Horhn said that legislation to help Jackson may be hidden, though. "The other thing about the process, and this is where we've been really successful in past years, is to attach things that benefit Jackson to other pieces of legislation," Horhn said.

Sitting in the House Ways and Means Committee is a bill that would give tax credits to grocery stores in struggling communities "to attract and keep grocery stores," Horhn said. Parts of Jackson are "food deserts" that have no grocery stores.

On the upside, one bond bill to make improvements to the Jackson zoo has advanced and remains alive.

Much of the conversation in the Legislature's seventh week of the session was about decreasing the state budget.

The Senate passed its tax cut—which includes a three-pronged approach to cutting taxes for all Mississippians and businesses—in the session's sixth week. But Speaker of the House Philip Gunn's tax cut, which would entirely eliminate the state's personal income tax over 15 years, raised more concern.

Democrats argued that lawmakers threw the bill together in a political move. Rep. Bobby Moak, D-Bogue Chitto, gave his impression of the House Republicans: "We've got the governor's tax cut, the lieutenant governor's tax cut, and, Oh my goodness we need one from the House. This is an election year. What are we going to do if we don't have our tax cut?"

The House passed the income tax elimination 83-32 on Feb. 25. Some Democrats who are clearly against the cut, like Moak, voted for the cut so they "don't get a postcard," referring to the political mailers that criticize politicians on their voting record. The bill, Moak argued, won't "see the light of day" in the Senate.

When the parents of 10-year-old Flannery Smith noticed their daughter's learning difficulty, they enlisted the Mississippi Center for Justice, which helped compel Jackson Public Schools to provide services including diagnoses and a special computer program.

Randy Smith, Flannery's father, said his daughter lost one to two grade levels in the four years the family sought help. Now, she is now making all As and Bs, he said.

With the special-needs voucher bill currently under deliberation in the Legislature, the family would receive $6,300, but still would have had to pay more than $30,000 out of their pockets.

Smith is concerned that families who cannot afford expensive special-needs services on their own will not be helped by the voucher, which will only cover a portion of private costs.

Plus, it doesn't serve all students, he added. The Equal Opportunity for Students With Special Needs Act passed the House Education Committee Feb. 26. The bill would cost the state nearly $410 million and take more than 125 years to serve all students with special needs in the state, according to estimates. The bill provides $3.25 million in the first year to serve approximately 500 students.

Rep. David Baria, D-Bay St. Louis, has an alternative, which he plans to introduce through an amendment, that would eliminate the voucher and create an Office of Special Needs Counsel.

It would provide legal advice and help compel school districts to follow the laws the state already has to ensure students with special needs, like Flannery, get an equal education.

Baria said the office would cost the state $1.5 million, serve all students in its first year and not displace students from public schools. Smith supports the proposed special counsel's office.

"The turn around (for Flannery) really came because we were able to get the advice and counsel we needed to get the education that we already have a right to," Smith said.