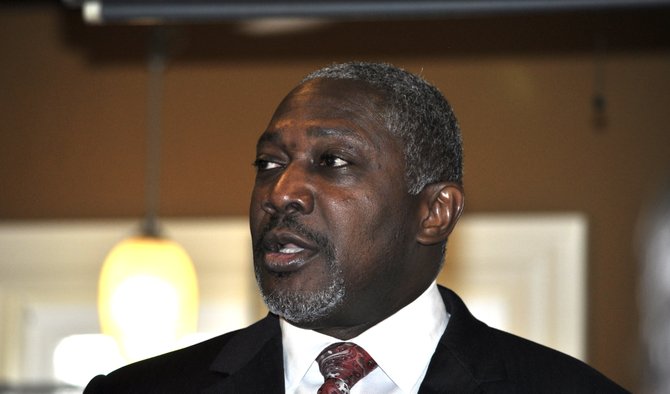 Sen. John Horhn is one of the original authors of Senate Bill 3268—the 2009 legislation that grants Jackson the authority to impose the tax if passed by a 60 percent referendum vote. Photo by Trip Burns.

The 1-percent sales tax is an opportunity, and not a burden.

That was the message state Sen. John Horhn delivered to a packed house at the weekly Friday Forum meeting at Koinonia Coffee House near Jackson State Friday morning.

Horhn is one of the original authors of Senate Bill 3268—the 2009 legislation that grants Jackson the authority to impose the tax if passed by a 60 percent referendum vote. He said today that not only would the tax help fix the city's streets, sewer and water-distribution system, but it would also change the perception of Jackson in the Legislature.

"There's certainly a 'love to hate Jackson' mentality,'" Horhn said. "Most of my colleagues are from small towns with populations lower than 8,000 people, and they perceive Jackson in a certain way. This tax will show the rest of the state that we are ready to make the tough decisions to help ourselves."

Horhn also spoke on a number of other issues on which he thinks the Legislature is primed to make a move. He said Democrats in both houses of the Legislature are going to continue trying to convince their Republican colleagues to expand Medicare.

He said he knows it's an uphill battle, because even if it gets passed in both legislative bodies, it would still have to get the signature of Gov. Phil Bryant.

"Our governor is known around the country as a Tea Party governor," Horhn said. "He is entrenched with the Tea Party. He has said many times he would not support the expansion, even though the economic impact is obvious. You would create 9,000 jobs—more jobs than Nissan and Toyota combined—and 340,000 Mississippians who do not have access to health care would suddenly have that opportunity."

Horhn also touted the Legislature's support of the Mississippi Museum of History and the Mississippi Civil Rights Museum, which are under construction on North Street next to the William Winter Archives, and said he's going to be a strong proponent for finding some funding for Jackson State University's proposal to build a state-of-the-art domed stadium.

But time and again, the conversation came back to the 1-percent sales tax. Many of the questions from the audience, who admittedly liked the idea of reasonably paved streets, centered around the commission that the legislation calls for to oversee the disbursement of the estimated $300 million the tax should generate over its 20-year lifespan.

That committee would be made up of 10 members, with the governor, lieutenant governor and speaker of the House each appointing one member; the mayor of Jackson appointing three members; and the Greater Jackson Chamber of Commerce appointing four members. All of the members would have to be city residents except the ones appointed by the chamber of commerce, who have to own a business within the city limits. The Chambers are not required to live in the city.

The idea that people, even businessmen and women who have financial interest in the city, who do not live inside city limits telling Jacksonians what to do with their own money is an idea that stalled action on the proposed tax under former Mayor Harvey Johnson Jr.

"The commission was a necessary evil in terms of getting the bill passed in the Legislature," Horhn said. "I don't think, in the long term, it has the power or muscle that people think. It's more of a benign group than anything, because they still have to follow the city's master plan."

The referendum vote is set for Jan. 14, 2014. The city and other proponents of the tax have ramped up their campaigning. At Koinonia, a leaflet in support of the tax, paid for by a group called Jacksonians For Better Roads and Clean Water, says the tax makes sense and urges voters to go to the polls.

A call to the number at the bottom of the flier led to the voicemail of the law firm Lumumba, Freelon and Associates, the law office of Mayor Chokwe Lumumba and his partner Harvey Freelon.

"I think it's time to raise the visibility of the campaign," Horhn said. "We're competing with the holiday season, which is always difficult when you are trying to gain momentum. But if the message is clear and consistent, the people will listen."